What Is Making Markets so Volatile?


There has been a plethora of digital ink spilled about the recent stock market volatility. I believe I need to add my two cents on what is driving the markets and what you should do about it. Disclaimer –nobodyreally knows why markets go up or down. A 10% drop in stocks is commonly called a correction. Were they really wrong at the higher price? If stocks rise by 10% or more are they correcting from their lower price to their correct, higher price?

People still debate about why the stock market crashed in 1987 almost 30 years later. Was the October of 2014 stock market crash caused by fears of ISIS or Ebola or something else? We will never know for sure. Markets and economies are extremely complicated and impossible to predict. Any article that attempts to explain what is happening is merely someone’s best guess. Some author’s best guesses are missing some fairly basic points.

The first is that the debt market is much bigger than the stock market. Financial news shows tend to focus on what the stock market did each day and tend to ignore the bond market because it is usually less exciting. Well, the second half of 2015 was anything but boring for high yield bond investors. I was shocked to learn on December 10, 2015 that the Third Avenue Focused Credit Mutual Fund was blocking redemptions in cash because the fund couldn’t sell its junk debt at a fair price. I have never heard of such a thing happening in a 1940 Act mutual fund. The chart below shows how much more interest investors are demanding for corporate bonds above the interest US Treasuries pay. It is important to note that the spikes in yield are not just in the energy and material sectors. 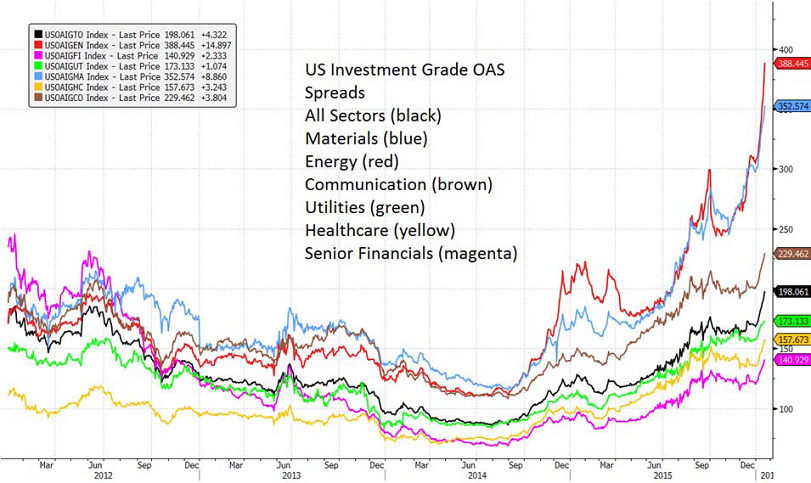 On a recent conference call Jeff Gundlach, founder of Doubleline Capital, noted that stress in the junk bond market tends to correlate with stress in the stock market.

Below is a chart that shows the S&P 500 (about 1900) in black and the inverse US HY spread in blue (about 8% yield). You can see that high yield bond spreads have risen to 8% from about 4.5% since 2014 and the current spread looks like we are already in a recession.

According to DoubleLine, the stock market or the HY bond market is wrong here. Source: DoubleLine.

Since debt is not covered much on financial media, you may be surprised to learn that the corporate credit market peaked out about 18 months ago while the S&P 500 only peaked out seven months ago. We may be further into a bear market than many people think. The January 20th intraday low was a 15% drop from the May 20th, 2015, high, but many markets have done substantially worse. The Russell 2000 Small Company Index was recently down 26% from its 2015 high and the MSCI Emerging Market Index had dropped by 37% from its 2015 high. A few strong growth stocks are currently preventing the S&P 500 from entering a bear market (20% peak to trough drop) while many other markets have already dropped by over 20%. You probably are aware that the S&P 500 tested the 10/15/2014 low on 1/20/16. It is amazing to see how much lower the equally weighted S&P 500 stock index is today compared to its October 2014, low. 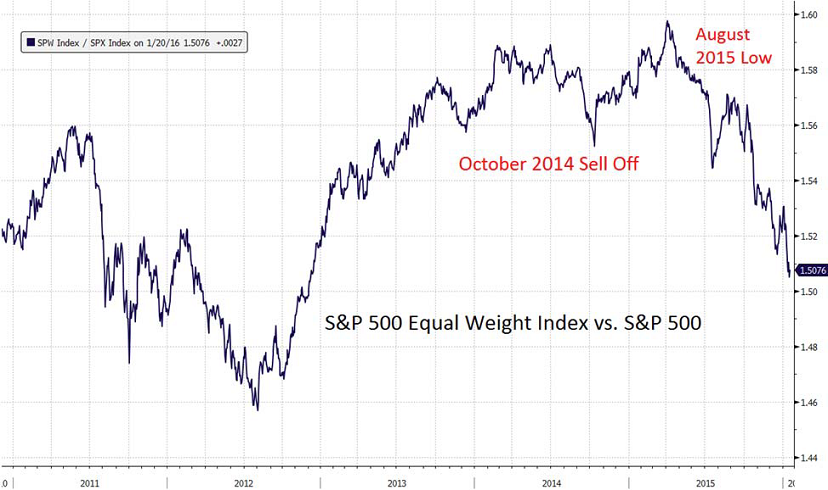 Some pundits have said the markets are dropping because the Fed raised rates in December by .25% and plan to regularly raise rates over the course of 2016 and 2017. I think there is more to the story than that. Would raising the interest rate you get paid on your bank account by .25% make a meaningful difference to how much money you spend? Of course not. .25% is a rounding error and not a big deal. What is a big deal is the tightening cycle we find ourselves in today. Below is a chart of the Atlanta Fed’s Shadow Funds Rate, which represents how effective quantitative easing was on monetary conditions once the Federal Funds rate went to zero. You can see the shadow rate has soared from -3% to 0% in a little over a year. While .25% is not a big deal, 3% is a huge deal. Tightening this much this fast is a very big deal. 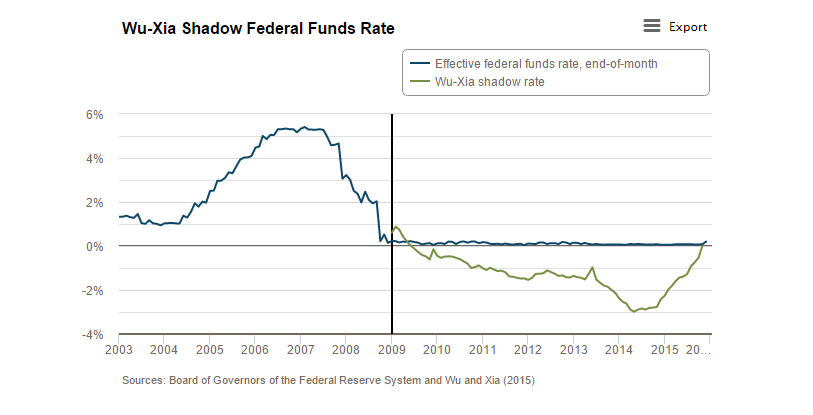 The last culprit causing stocks to drop is overall global tightening. Liquidity matters a lot for asset prices and it isn’t talked about enough because very few people understand things like current-account surpluses and the differences between M1 and M2. During the commodity boom of the 2000s, resource-rich nations built up massive foreign-exchange reserves. Now that commodities are getting clobbered, nations like Brazil, the Netherlands, and the Petro States of the Middle East are forced to use these reserves to support their currencies and economies. China is also having to spend its reserves as they try to convert from a manufacturing economy to a more consumption/service based economy. This is dramatically reducing the global liquidity and causing stress across financial markets. When there is less money splashing around, markets tend to drop. Here is one smart analyst’s four minute explanation of how China’s reserves are affecting markets.

Are we in a Recession?


I have read and listened to a lot of smart financial people argue as to whether or not the US is in a recession. Let me proudly say that whether we are in or about to go into recession does not matter much for your investments. Ben Carlson, of A Wealth of Common Sense , recently created the graphic below that shows the double digit losses that took place without a recession. As you can see the US stock market lost more than 25% on four occasions without the US economy being declared “officially” in recession. By the time the National Bureau of Economic Research declares an official recession, the stock market will have lost most of what it is going to lose and the recession may be over by then. The only reason you should care about a recession is the possibility you may lose your job. What Should you do?


IF we are in the midst of a bear, you should know that the average bear market lasts 19 months and causes losses of 38 percent . Unfortunately, every bear market starts out like any drop or correction and you will not know until afterwards if the final drop was 15%, 22%, or 31%. The S&P 500 has dropped 15% so far and it is possible that this corrective phase ended on January 20th. Nobody knows if that is the case and I wouldn’t be surprised if markets go lower because US stocks have gone up so much over the last seven years and economies and stock markets are cyclical. They are also extremely difficult to consistently time.

I have found the chart below to be very helpful during times of market duress. The grey bars on top show the annual calendar year returns of the S&P 500 over the last 35 years. I observe that only six of the 35 years were negative and only three years had losses of over 10%.

The blue boxes below the calendar year returns show the stock market drops in the middle of each year from peak to trough. In 2015, the S&P 500 made about 1% from 1/1 to 12/31, but from May 20th to August 24th it lost about 12%. Over the 35 year period, the average annual return of the S&P was a whopping 11.6%, but in order to capture that return investors had to watch their stocks decline by about 14% every single year! 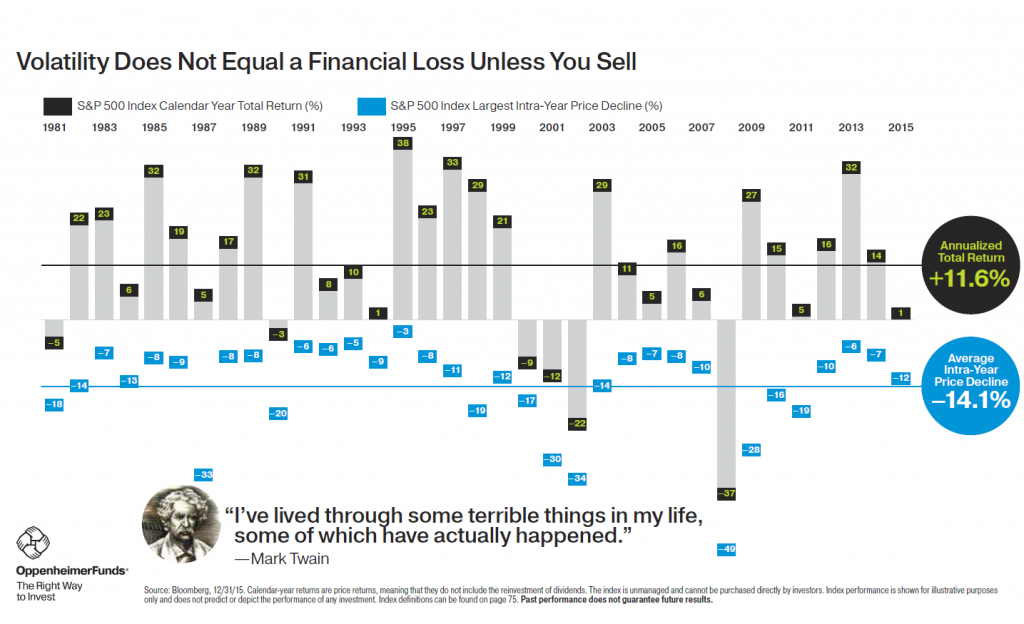 If you are going to own stocks, you should expect a 14% decline every single year! Source: Oppenheimer Funds.

This chart helps me understand that if I want the possibility of double digit returns, I have to be willing to live with significant temporary drops almost every single year. This is how the stock market has always worked. It may seem more volatile today because we have access to so much more information, but the terrifying crashes are to be expected if you are going to have part of your portfolio invested in stocks. Better get used to it because it not likely to change.

You should also have an investment plan that anticipates a major correction will come almost every single year. Your plan should involve knowing yourself as an investor, it should incorporate your risk tolerance, and be something you understand and are comfortable with. I think most investors are best served by building a long-term buy and hold portfolio that is broadly diversified across global asset classes. Buying, holding, and rebalancing works well, but I see it fail for investors who are over-allocated to stocks. I am 38 years old and have half of my 401(k) in safe bonds that have gone up during the stock market correction. Some might say that is too conservative for someone with many years ahead of him, but I know my goals and who I am, and owning the safe bonds helps me stick with my plan.

No matter what this correction becomes, stick with your plan and stay disciplined. There are lots of strategies that work for building long-term wealth, but constantly chasing what has worked recently is not one of them. You also can’t try and time every five percent drop because the next 2008 is right around the corner. Don’t forget Peter Lynch’s advice that “Far more money has been lost by investors preparing for corrections or trying to anticipate corrections than has been lost in corrections themselves.”