We know from our Koski Research Future of Money Study that American consumers are looking for more integration in their financial lives. When news circulated earlier this year that Amazon was in talks with JPMorgan Chase and other financial institutions to offer checking accounts or checking-like services to Amazon customers, we wanted to know how Americans felt about America’s largest bank and America’s largest retailer linking up. Do Americans want financial integration to extend to linking their bank accounts directly to where they purchase goods online? 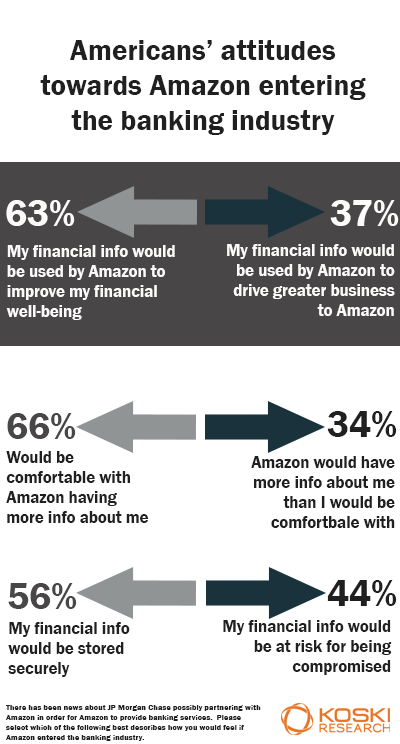 Partnership has the potential to appeal to massive audience


We’ve seen in our Future of Money study that the large majority (84%) of Americans would like to manage money from one central online platform where they can see deposits, spending and saving in one place . And, over half (56%) of the Americans in our survey report that they have an Amazon account—over twice as many as report having a JPMorgan Chase or Bank of America account and about as many as use PayPal.

Last year Forbes reported that four out of every $10 spent online in the U.S. is spent on Amazon. The potential in this kind of integration between Amazon and a financial institution is, well, massive.

How will you integrate? Let us help you get the insights you need to stay competitive. Start the conversation. engage@koskiresearch.com