Has the Fed Shifted More or Less Hawkish?

The Federal Open Market Committee (FOMC) voted to raise the Federal funds rate by 0.75% to a range of 2.25%-2.50%.  This was the second consecutive increase of this size and the fourth hike this cycle, and the Fed signaled “ongoing increases” would be appropriate at coming meetings. As evidenced by the June FOMC median dot plot and recent Fed speak, the committee still appears on track to raise rates to a range of 3.25%-3.50% by the end of the year. However, this does imply less dramatic increases in the next three FOMC meetings than in the last two.  Moreover, further increases beyond that point may conflict with inflation and labor market dynamics which currently signal the need for a more cautious approach into next year.

There were some notable changes to the statement language relative to the June statement:

The statement could be perceived as somewhat less hawkish. The recent softening in real consumption and PMI data, the modest uptick in initial jobless claims, and the slowdown in the housing market, suggest rate hikes are impacting demand in the economy. Moreover, the downward trend in the Fed’s Global Supply Chain Pressure Index and the recent fall in commodity prices suggests supply chain issues are easing. Altogether, there is scope for the Fed to be less aggressive with rate increases later this year.

The press conference commentary was balanced. Chairman Powell highlighted that similarly large rate increases could be appropriate if inflation does not recede, while also acknowledging that it could be appropriate to slow the pace of rate increases later this year if inflation falls and economic activity cools further. However, the Chair made clear the committee is willing, and is hoping for, enough cooling in the economy—i.e., a modest uptick in the unemployment rate—to create enough slack in the economy to bring inflation back down. A current laser focus on killing inflation suggests there remains a risk that the Fed raises rates too far to achieve this outcome.

That said, we now believe “ongoing increases” suggests the Fed will hike rates by 50bps in September, 25bp in November and 25bp in December. While bond yields and stocks were relatively unchanged following the release of the statement, stocks bounced, and yields fell with the curve flattening during the Chair’s press conference. Markets seem to appreciate a potentially less aggressive Fed with the nominal 2Y treasury yield falling below 3%. For investors, further tightening is ahead; however, a data-dependent committee suggests an increase in the federal funds rate to above 3.5% in this cycle is now less likely. 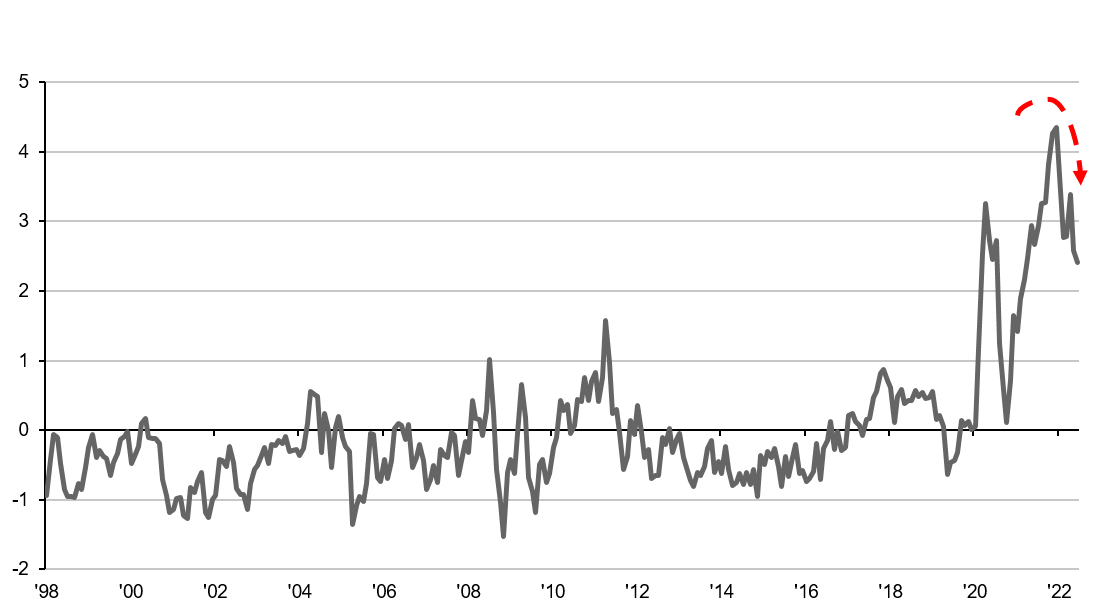