S&P 500 overdue relief rally – flat, lacking significant momentum, not internally at its strongest – is here. Instead of projecting any healthy bear market rally targets (numbers around 10% are often thrown around), I‘m afraid that time it takes to ignite, would become a larger concern for the bulls. True, not enough have been sucked in, but buy the dip mentality is still there – we‘re now at a crossroads between either a very shallow reprieve protracted in time, or going more than a couple dozen points higher still. Just when the trap is ready, sellers would show up – the sentiment is still relatively bearish though – and that‘s an ally of today‘s bulls.

Similarly to the precious metals, the risks of being out of the market outweigh those of being in. Just as I‘m not counting on a true slide in gold (or even silver, where the outlook is worse) no matter the miners‘ weakness, I think in stocks the rally would give way to a fresh downleg. Yesterday‘s 3,740s aren‘t a demonstration of convincing strength – liquidity keeps biting. I don‘t see the dollar as retreating much. Treasuries are lifting the pressure on the Fed to hike somewhat, but this reprieve looks to be temporary. The retreat in commodities isn‘t lighting up the fuse beneath value, and tech doesn‘t react to yields declining – something is amiss here, and would become apparent in the next 2%+ red day.

Cryptos keep highlighting the woes – there is no tide to lift all boats anymore. Once the Fed repo facilities rush gets complemented by money market fund inflows, we‘re in for another tightening engine firing up. The incentive is there, the move not yet so – which could change as fast as inflation expectations becoming (having become) unanchored. Crude oil still doesn‘t have topped, and similarly to my recent copper turn, crude oil is panning out well.

Let‘s move right into the charts (all courtesy of Stockcharts.com). 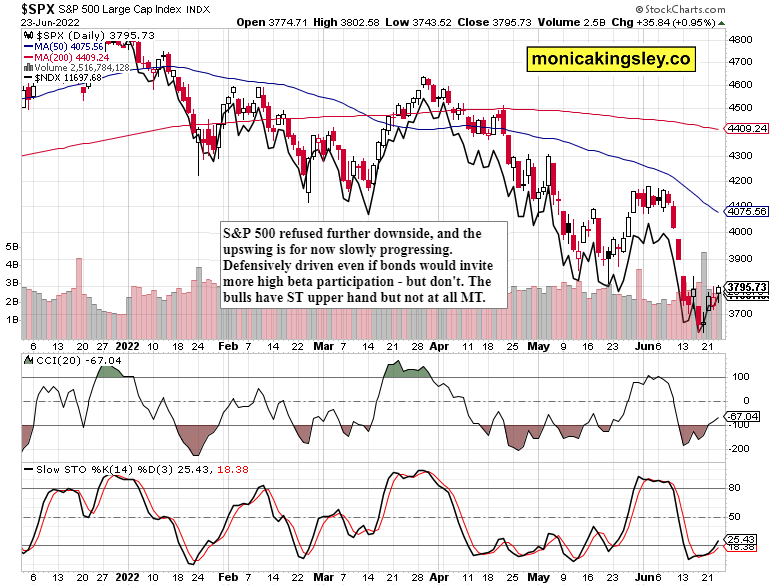 Still the short-term possibility with room overhead, but it would be up to the internals to decide the upswing‘s fate. The 3,830s zone is getting tested, and bulls would likely close above it today.

Bonds look tired, and the quality ones haven‘t risen nearly enough. This is so different from the prior bear market rally circumstances… 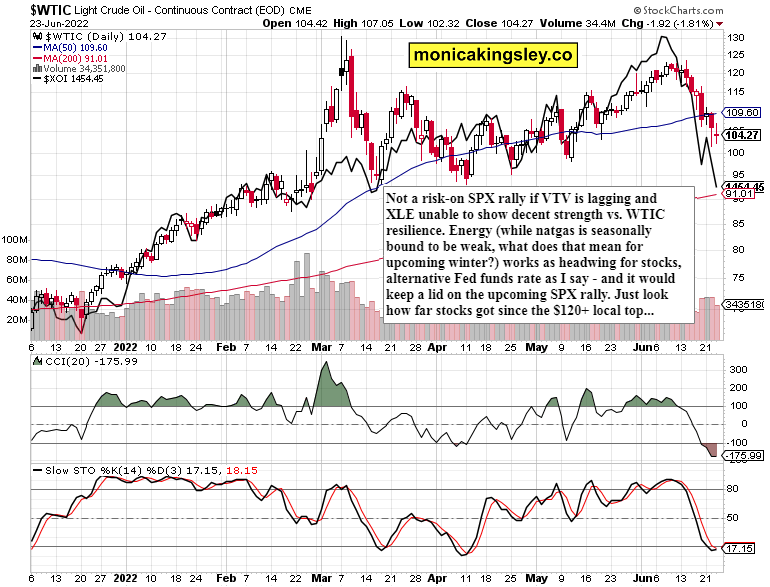 Oil got too cheap, too fast – while there isn‘t enough (there isn‘t any) systemic deterioration in the real economy (or finance) to speak of just yet. Sellers are disappearing – and the tide is ready to turn.

Related: The Bear Market Has Been Confirmed. Here’s What To Do.