A couple of weeks ago, I introduced you to an exciting new company called GoldSpot Discoveries, conceived and headed by mining visionary Denis Laviolette. GoldSpot is the world’s first exploration company to use artificial intelligence (AI) and machine learning in the discovery process for precious metals and other natural resources. Not yet three years old, it’s already had a number of successes locating optimal target zones.I’m pleased to inform you now that GoldSpot began trading last week on the TSX Venture Exchange under the ticker SPOT. This is a giant leap forward not just for the company and its team but also AI in general.I’m also thrilled to have been named chairman of GoldSpot’s board of directors, effective today.https://twitter.com/GoldspotD/status/1098596534860435456It’s important for readers to realize that AI is no longer the stuff of science fiction. The technology is already disrupting multiple industries, many of which impact you on a daily basis. Own an iPhone X? Its facial recognition system is powered by AI. Ever been redirected by Google Maps because of an accident or construction ahead? You guessed it: AI.Related: The Fascinating Questions of a 100 Year AI Life Related: This AI Company Is the Future of Gold Exploration And those are just a couple of small examples. By one estimate, AI contributed a whopping $2 trillion to global GDP last year. By 2030, it could be as much as $15.7 trillion, “making it the biggest commercial opportunity in today’s fast changing economy,” according to a recent report by PwC.

Not every industry and sector will be affected equally, but none will go untouched.“AI is the new electricity,” says Chinese-English computer scientist and entrepreneur Andrew Ng. “I can hardly imagine an industry which is not going to be transformed by AI.”Among the industries that have been fastest to adopt AI, according to PwC, are health care, automotive and financial services. Earlier and more accurate diagnostics, powered by AI, means earlier treatment of life-threatening diseases. Once on the market, self-driving cars will free up an estimated 300 hours the typical American spends driving every year. And more and more people are putting their trust in robo-advisors to manage their wealth. 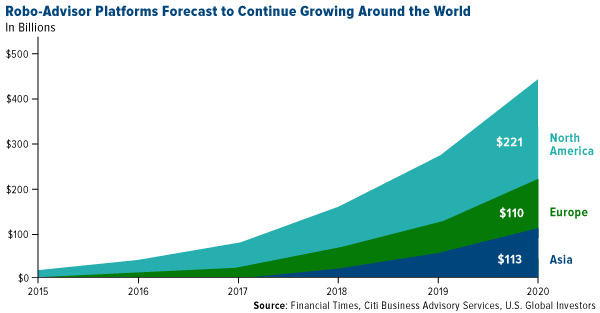 AI patents have surged in the past five years alone, according to the World Intellectual Property Organization (WIPO). From 2013 to the end of 2017, the number of patents grew nearly three times, from 19,000 to more than 55,600.The massive increase in patenting “means we can expect a very significant number of new AI-based products, applications and techniques that will alter our daily lives—and also shape future human interaction with the machines we created,” comments WIPO Director-General Francis Gurry.A majority of the top 500 applicants are from China, the U.S. and South Korea. Only four are from Europe. At the top of the list sits IBM, with an incredible 8,290 inventions (so far), followed by Microsoft, which has 5,930 patents to its name.

As you might imagine, the U.S. government wants to ensure that the country remain competitive against Asia. This very month, President Donald Trump signed an executive order urging federal agencies to prioritize AI investments in research and development. The American AI Initiative, as it’s called, says that these measures are “critical to creating the industries of the future, like autonomous cars, industrial robots, algorithms for disease diagnosis and more.”“I want 5G, and even 6G, technology in the United States as soon as possible,” Trump tweeted last week, presumably in response to news that Chinese telecommunications firm ZTE could be first to bring fifth-generation cellular technology to market. “American companies must step up their efforts or get left behind. There is no reason that we should be lagging behind on… something that is so obviously the future.”

Bringing AI to the Miners

Interestingly enough, the industry that’s been slowest to adopt AI is manufacturing, including industrial products and raw materials, according to PwC.The metals and mining industry has been especially resistant to adoption, with spending on innovation far below that of other industries.To be fair, not every miner has been behind the curve. For more than 10 years now, Rio Tinto has been using AI-powered autonomous trucks to haul materials, reducing fuel consumption and increasing safety in the process. The London-based producer also uses autonomous loaders and drills, and its highly anticipated “intelligent mine” in Western Australia is slated to begin operations in 2021.But much more could be done, Denis says, especially when it comes to utilizing the mountains of data already at our fingertips. Miners were “paying for all this data, but no one was really doing anything with it,” he told me earlier this month.Speaking to the Wall Street Journal in December, Denis commented that he had seen “an awful lot of posturing” when it came to miners claiming to be interested in modernizing operations and integrating AI. “They say they are working on this internally, then you find out they haven’t got anywhere.”This is precisely why he conceived of GoldSpot Discoveries. I’m fully convinced that mining’s future belongs to AI, with Denis and GoldSpot leading the way. I invite you to learn more by visiting the company’s website by clicking here!