Trade War: We Are at DEFCON 2

Friday brought the curtain down on the market's first negative month of the year and its first down since May 2012.

From the President's first tweet that China was backtracking on commitments already made to late Thursday's announcement that the administration was putting a 5% tariff on all imports from Mexico, world markets took stair step moves lower. Only India, Australia, Brazil and Greece seemed to escape the storm. If I was describing the events of a conventional war instead of one centered on trade, a military defense readiness condition of DEFCON 2 would be appropriate.I think the administration's message is not just directed at Mexico but to Congress hoping to put pressure on politicians to act on immigration as well as the United States Canada Agreement (USMCA). With Congress not even in session that seems difficult at best.The U.S. imports about $350 Billion from Mexico and exports about $265 Billion. All the usual suspects get hit with autos and auto parts at the top of the list along with air conditioners and TV's.What's changed here, is that tariffs are now being used to achieve a political outcome. Supporters of the administration who want to see movement on border security will say why not but make no mistake there will be voices even among Republicans that will fight the President on this new direction of the trade war. Senate Finance Committee Chair Chuck Grassley has already come out against the administration's latest announcement saying; "I support nearly every one of President Trump's immigration policies, but this is not one of them."I understand the President’s frustration on immigration. Congress has repeatedly failed the American people and done nothing for the last couple of decades, punting the ball to the next wave of politicians who will find new ways to fail. However, the biggest risk is even if this works and we get meaningful traction on stemming the flow of illegals traveling through Mexico, we just shook hands on the USMCA trade agreement and Mexican authorities will have good cause as to whether they can trust a deal made with this Administration. Semiconductor ETF SMH[ARCA] - $101.27 3.15 (3.21%) 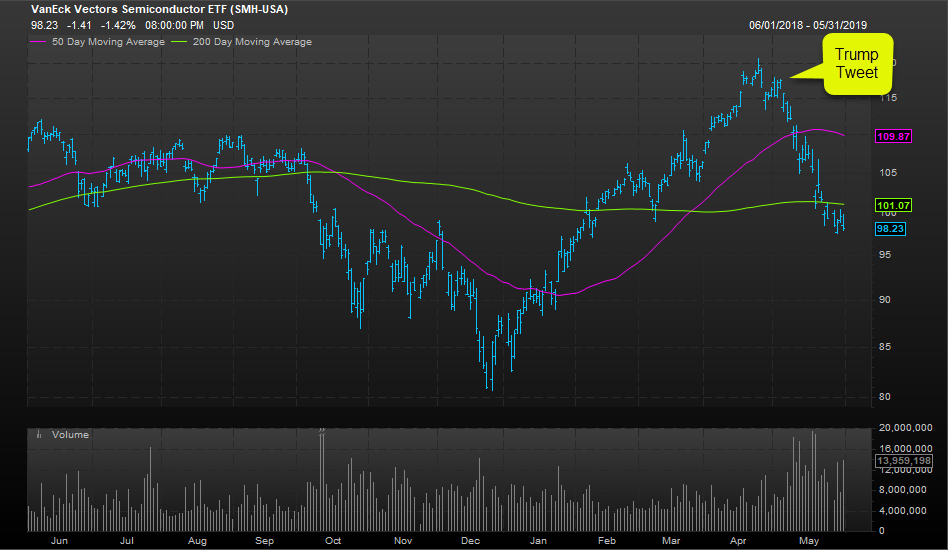 Investors making bets on an investment outcome are now taking incoming on two fronts. They spent the last 4 weeks figuring out which of their stocks we're most exposed to a Trade War with China and came up with semiconductors. Most have 20-40% exposure so it's not surprising the industry was one of the hardest hit. Now they have to go through every one of their positions and put them through the Mexican inspection. Friday's price action was just that as auto stocks and even companies exposed to rising food costs we're hit hard following Thursday evening's surprise announcement.Some in the media like ZeroHedgeare calling it a Black Swan event. Those are big words and while not impossible are overused by a media whose biggest job is to get you to click on the story. In the end, commerce finds a way. Supply chains move, companies and the economy adjust. Unfortunately, even if successful it's a process that would take years to unfold. I'll repeat what I've said in previous posts that President Xi has now shown his true colors. It was never his intention to make a deal, at least not on big-ticket items like intellectual property or moving to a market-based economy. He's made a political gamble despite a failing economy to push talks toward the 2020 election hoping for a change and a more conventional negotiating partner.

On Sunday, we got something of a different message from Beijing that some media outlets are describing as markedly more measured in tone. The most promising quote comes from Vice Commerce Secretary Wang Shouwen who told reporters; "we're willing to adopt a cooperative approach to find a solution."Whether or not this will be enough to take the edge off a negotiation that has clearly gone sour remains to be seen. Trump is still expected to meet with President Xi at some point during the coming G20 meeting. Few are expecting a joint statement but the fact that this policy paper from China comes out in advance is at least promising.Related: What Will Trump’s Immigration Fight Cost You?Related: 2020: The Next US Election Can Create a Big Market Pullback

If there's any chance of negotiations succeeding in the coming weeks President Trump is going to have to find something he can give up and still get to the end game. The obvious carrot is an agreement to lift tariffs immediately once a deal is signed. Keeping your economic forces at Defcon 1 when your opponent lowers their defenses is a non-starter. Lifting the tariffs following an agreement gives up little and gives President Xi an opportunity to save face with hardliners at home. In any event tariffs could easily be reinstated if in fact China doesn't comply or is found cheating on any agreed to deal. 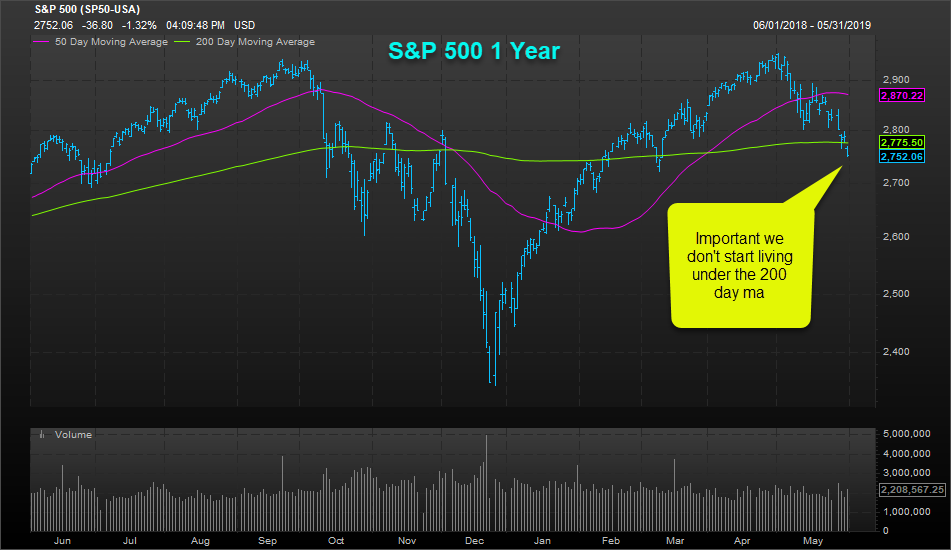 Meanwhile back on Wall Street, market technicians are surveying the damage to their charts and what's it's going to take to get back on I-95 North. The all-important 200 day moving average has been breached by the S&P 500, Dow Jones Industrial Average and even the tech heavy Nasdaq. Small Caps in the Russell 2000 have been living below the average for most of the last year.

This must change for markets to head higher

Forward 12 month estimates for the S&P 500 out to June next year are still holding up but 2019 looks increasingly at risk with calendar year estimates declining every month since September.With 10-year yields close to 2.1% and the iShares 20-Year Treasury ETF ( TLT[NSD] - $130.94 1.51 (1.14%)breaking to 2-year highs, it looks a lot like a panic into perceived safety. The chart looks more like a hot shot tech stock than a stodgy old bond fund. Nevertheless, in that backdrop fund flows for equity have been negative for much of the last year. Again, another picture that must change. 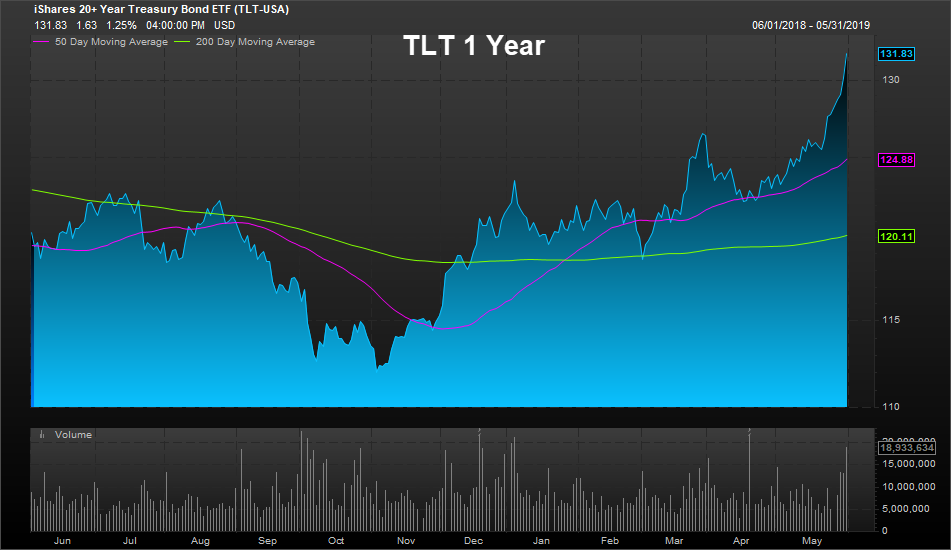 While in the end it will be earnings and interest rates that drive share prices in the short run investors are hostage to the news cycle. Make no mistake, we're at war! While bullets and missiles aren't flying words are.

In 1944 George S. Patton was given the command of the Third United States Army. Patton is often remembered for his famous quotes from speeches he made to troops or the press corp. In a speech made to the Third Army he said;"Americans love to fight. All real Americans love the sting and clash of battle."As we head into a war of a different nature and an approaching election the President will have to deal with a dynamic that is as true today as it was when Patton spoke it in 1944. "Americans love a winner and will not tolerate a loser."