The Great FTX Collapse, and the Role Binance Played

I was tempted to write about this, but many others have. In particular, I received a post from Dan Ashmore, crypto analyst at Invezz, which I thought was worth sharing.

To begin with, if you're not aware, there's a massive war taking place in cryptoland. As bitcoin and other crypto prices dive, exchanges and key figures in the community have started turf wars. The best example of this is the battle between CZ (Changpeng Zhao) of Binance and Sam Bankman-Fried (SBF) of FTX. Initially working together until FTX started to threaten Binance's dominance as a crypto exchange. At that point. CZ pulled his investments out of FTX and, soon after, FTX collapsed losing billions. SBF lost $16 billion of his personal fortune in about 72 hours, as did most of their users.

Here's the story, as Dan tells it:

Binance helped to incubate FTX’s rise and last year, they cashed out their equity to the tune of $2.1 billion as a split between stablecoins and FTT, the native token of FTX.

If you’re curious as to why Binance would hold the native token of its biggest rival, FTX, you should be. It is typical of the poor diversification and incestuous financials that we often see in cryptocurrency, much like when Luna imploded in May. It took a load of companies with it because so many were exposed to the Luna token, overleveraging and all investing in each other.

Below you can see the composition of the $14.6 billion assets at the time. As you can see, FTT makes up at least 40%, including $3.7 billion of unlocked FTT. The market cap of FTT at the time was $3 billion. 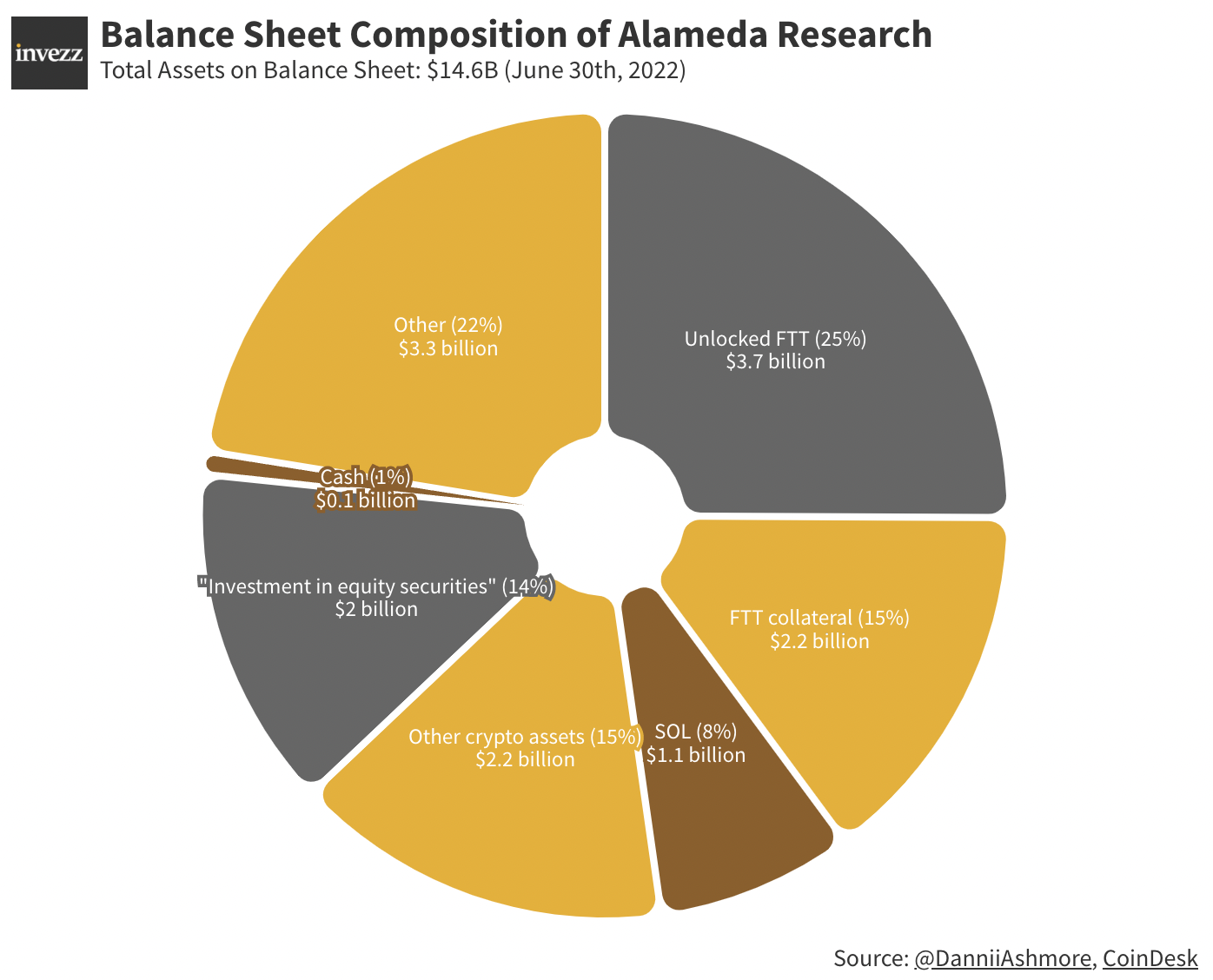 These large numbers meant that Alameda’s balance sheet was grossly overstated. FTT is a token printed out of thin air, and SBF ran both companies. Talk about a conflict of interest…

The revelations about Alameda’s balance sheet being full of FTT spooked Binance CEO Changpeng Zhao (CZ), so much so that he announced he was dumping it all.

A flood of withdrawals started coming out of FTX, and there had long been questions over the relationship between Alameda and FTX. And then, the plot twist. FTX suspended withdrawals.

This immediately threw up PTSD for crypto investors, for whom the suspended withdrawals of companies like Celsius and Voyager Digital earlier this year was all too fresh. Then CZ came out and blew the doors off the whole thing, announcing Binance were acquiring FTX.

Akin to Google taking over Facebook, the number one cryptocurrency exchange had eaten up the number two cryptocurrency exchange. While many will point to this as a huge win for Binance, I look at it as a loss for the entire industry. What an incredibly damaging blow to the entire space, seeing the second biggest exchange go up in flames and so many losing so much again.

FTX is a centralised exchange which appears to have been playing dirty with client assets. If SBF was sending client funds to Alameda where he was using them to earn a return, that to me sounds like fraud.

So what happens next? The token, FTT, has spiralled down and it faces a battle to survive. The token is down 75% nearly overnight and was trading at $45 in March.

As for the client assets in FTX, this is the disturbing part. I really hope customers get their money back, but it is hard to say right now. Likely this ends up going through a long court process, and hopefully they get as much back as possible, but right now we do not know what the size of the hole is.

We don’t know what FTX did with client funds. FTX is not a bank. It should not be subject to a liquidity crisis. Assets shouldn’t even be backed 1:1, assets should just be…there.

And once more, it’s the retail investors who may pay the biggest price.

You can find further insight from Dan into the FTX collapse here.