Avoid This Mistake When Giving Your Boss Bad News

You’ve got to give your boss bad news. But the timing isn’t great–for you or for them. The restructure. The uncertainty. The promotion that’s right around the corner.  Maybe it’s just not a great time to rock the boat.

How do you give your boss bad news well, while avoiding the proverbial shooting of the messenger? Start by “ditching the diaper genie” and use our D.A.R.N. approach for delivering bad news.

If you’ve bumped into us in an airport over the last decade, it’s likely we’ve been carrying a diaper genie. Why? We’re passionate about avoiding sandwich feedback, having real conversations that matter, and delivering bad news well.

Our son, Sebastian, loves this metaphor so much that he can even explain it himself (as seen here in this video (worth a watch and a giggle). Our client invited our then 10-year-old son to give the diaper genie bit a go in Bristol England) and his recent sketch (at age 16, see below).

May our youth grow up in a world where real conversations are the norm. To learn to speak the truth with candor, and work in organizations that encourage them to speak up, share their ideas, and train them to do this well.

What does it mean to “ditch the diaper genie?” And, what does that have to do with giving your boss bad news?

If you haven’t been around a baby in a minute, a diaper genie works like this. You take a stinky diaper. You put it in the genie. Give it a twist. And the poop gets wrapped up so tight, that it doesn’t stink. But of course, we all know it still does.

Now, we say this with great respect for Playtex. Diaper Genies are a GREAT invention for parents and babies, but they’re not so good in organizations.

If you’ve got to give your boss bad news, it might be tempting to put it in the genie.

You think… “Our project is already three weeks behind. And we’ve just lost a key supplier.” But then you look at your boss, who’s already having a bad day, month, or year. So you stick it in the genie and say, “Well, we’ve had some minor setbacks. But, it’s really no big deal. Everything is under control.” 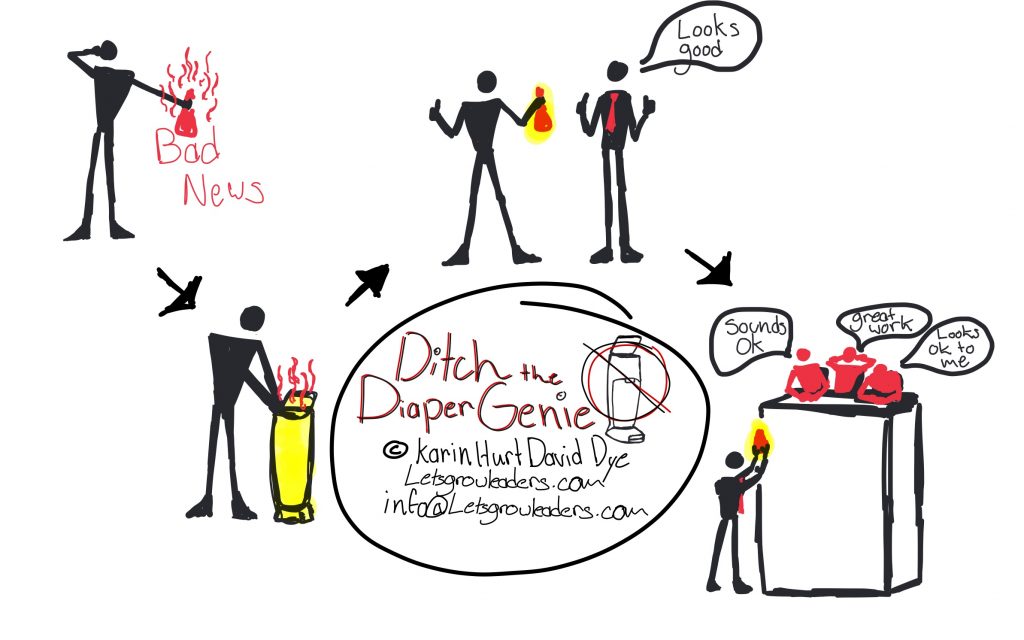 What to Do Instead: How to Give Your Boss Bad News (the D.A.R.N. Method).

So, what’s the best way to ditch the diaper genie when giving your boss bad news? Avoid the cover-up and the blindsides. And, try the D.A.R.N. approach instead.

D- Disclose. (Explain the situation and root cause)

No blindsides. It’s WAY better for your boss to hear the bad news from you FIRST. Not from their boss. Not from social media. Disclosing the bad news early, and often builds trust.

A-Accountability. (Don’t be a blamer of bad news)

Take accountability.  Even if it wasn’t completely your fault. You might say something like, “honestly, I should have been closer to this situation.” Or, “I know how important this is, and I want to do everything to make it right.”

R- Response. (Share your solution to fix the situation)

Explain what you’ve done to rectify the scene. “I’ve called the customer to make it right. And, alerted our social media team in case the customer goes to Twitter with this. I’ve given the supervisor a final written warning.”

N- Next Steps. (Explain your plan and what you need next)

This is where you really shine when giving your boss bad news. Have a plan. “What I think you might do next is contact your manager (so they’re not blindsided). Or, “I think we need to change our policies or procedures to ensure this never happens.”

When giving your boss bad news, we encourage you to “ditch the diaper genie,” disclose the situation, take accountability and work to make it right.

Your turn. What would you add? What are your best practices for giving your boss bad news?

Related: How to Lead Through a No-Win Scenario