The Fine Line Between Freedom and Regulation

I haven’t blogged much about my friends from Hangzhou (China) lately, as it is all in a state of flux, but what I can say is that the will of the people – President Xi – appears to be strong.

If you haven’t seen the latest nuance, Ant Group are now sharing customer data with the central bank and, if you don’t like it, you can’t use many of the functionalities of Alipya and Alibaba. It’s all based upon a credit scoring system called Huabei (just spend in Mandarin), and this gives Ant an insight into consumers who have no credit history. Imagine they’ve built the FICO for China.

Huabei, embedded with the Alipay app, filled a gap by serving young, internet-savvy consumers who often found it hard to obtain credit cards from banks. That consumer loan data wasn’t fully integrated into the PBOC’s credit-reporting system, making it difficult for regulators to assess banks’ exposure to potential defaults and individual borrower’s creditworthiness, a sore point for regulators.

It piqued my interest as it made me wonder how close to government should finance be?

As we decentralise and distribute trade and finance, what role should government and regulation play?

Can governments regulate a global network that does not recognise borders?

I know I’ve asked questions like this before. It’s a philosophical debate some of us are having, as we’re stuck at home for months on end. But it’s also an important debate. It’s the state versus liberty debate. It’s the regulated by government versus regulated by the network debate which, for those who follow my blog, will know it’s a debate I have often.

The core of this is privacy. How much access to your privacy should government be allowed? If you have an ID that is government issued – a driving licence, a passport – you have given the government the opportunity to track and trace you. But what if you create an alternative persona? What if you have a digital you, who operates purely on the network and never releases information about your real you to anyone?

This is the core of what is happening with crypto and government. I found it interesting, for example, that Joe Biden has just recommended Saule Omarova to run the OCC:

President Joe Biden plans to nominate a law professor who has criticized cryptocurrencies and advocated for the government to have a much bigger role in banking to run a top Wall Street regulator. Saule Omarova, who has said she wants to “end banking as we know it,” will be tapped to run the Office of the Comptroller of the Currency (the OCC).

The OCC supervises the nation’s biggest lenders including JPMorgan Chase., Bank of America and Citigroup

Omarova believes banking is broken and that cryptocurrencies are popular purely because they address the issues of “the dysfunctional financial system we already have.” She claims that digital tokens could destabilise the economy and lack safeguards.

She might be right, but the challenge is that I have that choice. You cannot ban cryptocurrencies. They are out there, available, work and are even used in some countries as their national currencies.

Therefore, I’d recommend Saule reads a couple of books before she takes office … 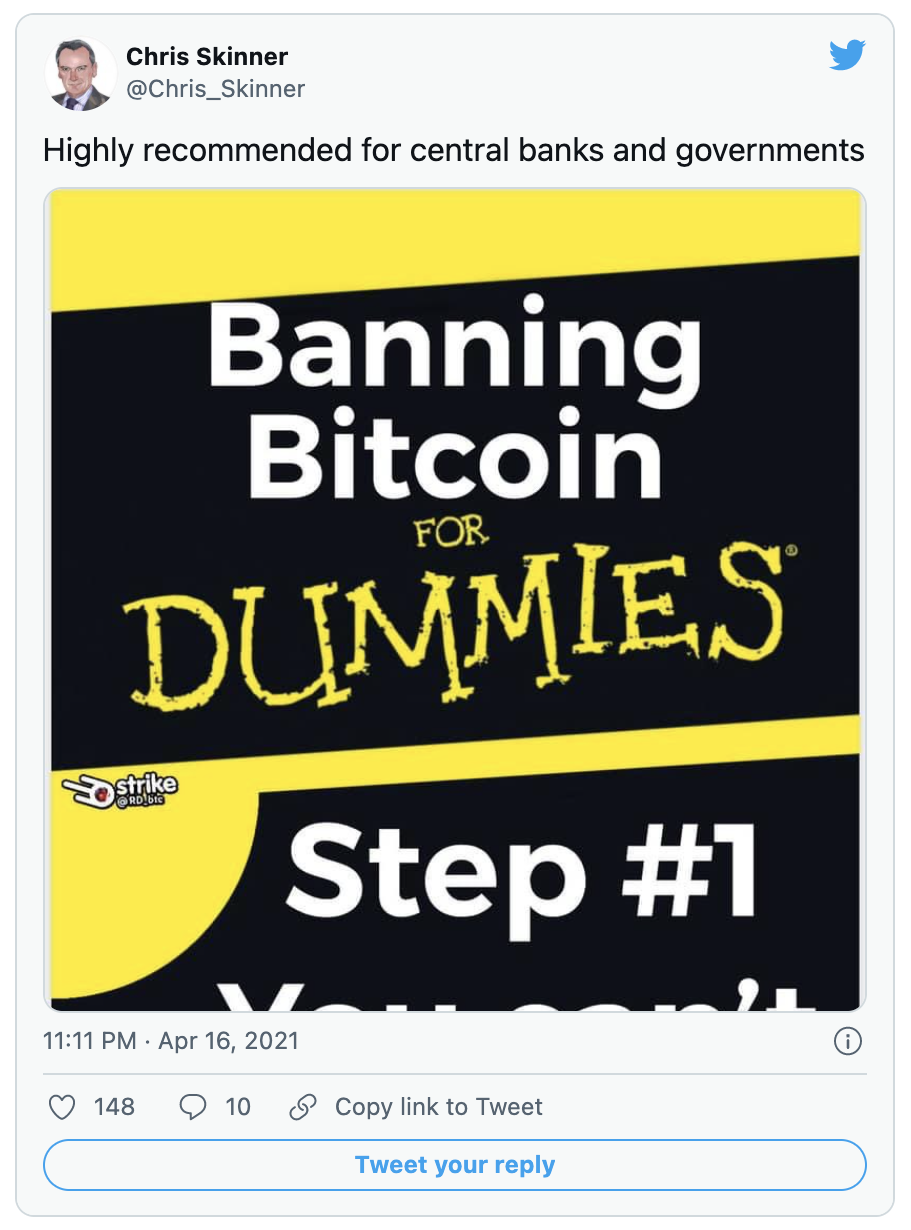 Related: What is President Xi’s Agenda?