Written by: Rachel A. Rasmussen, CFA

Investing should be more like watching paint dry or watching grass grow. If you want excitement, take $800 and go to Las Vegas.
— Paul Samuelson

To say the past twelve months have been tumultuous would be an understatement. From lows in March that were 34% off previous peaks to current all-time highs, markets whipsawed in the fastest stock market recovery ever, and have continued to climb. The headlines of 2021 are no less astonishing. As we referenced in the last market commentary, speculation abounds, bolstered by historically low interest rates. Between Reddit and online retail investors driving hedge funds to lose billions in the eye-widening GameStop short squeeze; bewildering growth in the size and number of SPACs (special purpose acquisition companies); wild gains in unprofitable tech companies and more, there remains plenty of evidence to support the impression that many areas of the markets are frothy.

It seems apropos to review the substantial, and nuanced, differences between investing and speculating, as well as signs of existing speculation in the current market environment. The subject matter is not novel by any means, but excess in the markets makes getting back to basics ever more pressing.

Speculation and investing differ across several criteria: conditions for making the decision, level of risk, time horizon, and investor approach. It is also important to note that one is neither only speculating nor only investing in a sort of binary decision-making tree – rather, there is a continuum between the two that requires evaluation. As such, this discussion is in broad terms rather than hard and fast rules.

Conditions for the Decision

Investing presumes a belief that one will make a profit (or not) based on the success (or failure) of an investment. The decision to invest stems from a conviction of the fundamentals that underly the business. Speculation, on the other hand, stems from a conviction in the movement of price with little to no regard for the fundamentals. There is a higher level of risk with a significantly higher chance of a complete loss. Of course, the risk is undertaken with an assumption that a much larger than average gain is possible. A speculator is betting on pricing swings to generate return. Some examples include day trading, options, futures contracts, short selling, or investing in unprofitable companies. For Phillip Carret, who penned The Art of Speculation (1930) and was much admired by Warren Buffet for his investing philosophy, the difference between speculation and investing is grounded in motive, making a profit based on business fundamentals in the case of investing or price in the case of speculation.

The level of risk taken is also a significant differentiator. Benjamin Graham writes in Security Analysis (1934), “An investment operation is one which, on thorough analysis, promises safety of principal and a satisfactory return. Operations not meeting these requirements are speculative.” Said differently, investing requires a reasonable return compared to the risk taken. An investing decision that is based on fundamentals and supported by facts can become speculative by increasing risk. For example, one could purchase a stock that they estimated to be undervalued. That decision in itself is not a speculative one, but it can become so if it is done with a greater level of risk, such as using excessive margin or by purchasing a very large concentration in a portfolio.

In the case of taking a ‘short position’, the risk is hypothetically infinite, as we saw with the GameStop and AMC trades that made the front page earlier this year. These stocks and others were being ‘shorted’ by hedge funds that expected the stocks’ prices to decline. While the hedge funds had reason to believe that fundamentally the stocks should fall, the investing decision became increasingly speculative by the method that was employed. Online Reddit chatters and others were speculating that prices would rise above and beyond any reasonable valuation (and that they would make the hedge funds lose a lot of money).

A short position is an excellent illustration of speculative risk taking. To create a short, shares are borrowed at a given price with the expectation that those shares can be sold now and bought back later for a lower price. The difference between the price at the time the shares are borrowed and the new, lower purchase price at a later point in time (less any fees incurred) results in a profit. The risk proposition is much greater than purchasing a stock, where the maximum loss possible is limited to the investment made. With a short, the price can rise rather than fall, forcing those holding speculative short positions to buy back the stocks at higher and higher prices in a “short squeeze”. The losses are theoretically infinite, as are the risks. This is one of many examples, that demonstrate the greater the risk, the greater the chance that the activity is a speculative one.

Another high risk investment is purchasing stock in an initial public offering (IPO) in which private companies are taken public. These companies often have a shorter operating history, may be unprofitable at the time of the IPO, and lack a clear path to profitability. Usually, a very small percentage of the total stock outstanding is offered in the IPO, creating a temporary scarcity and often inflating the initial offering price. However, this scarcity can abate quickly as large amounts of stock held by venture capitalists are usually waiting in the wings to be offered for sale periodically over the first few years after the IPO. Verdad Capital ran the numbers in a 2019 article and discovered that of 3,700 IPOs since the late 1980’s, the median loss of value over a three-year time horizon was over 30 percent and was over 40 percent in a five-year period1!

Despite a global pandemic and substantial economic concerns, the number of IPOs doubled in 2020 as compared to 2019, according to FactSet Data, and raised 150% more at $174 billion2. Moreover, over half of the IPOs from the third and fourth quarter stemmed from SPACs, special purpose acquisition companies, which are also known as blank check companies. SPACs are complicated, and we would need an entire article to do the topic justice, but it is worth briefly mentioning here due to their rise in popularity.

SPACs function as a shell company whose sole purpose is to raise money to acquire another company through a merger and take it public, typically within a two-year period. Investors hope the future company will trade at a premium. SPAC sponsors usually get a cut of 20% in the new company for their fee. SPACs have no assets (other than the funds raised by investors), operations, or even stated targets for acquisition, and as such, there is no prescient method to understanding the fundamental value, if any, that one is buying into! A recent Forbes article likened investing in a SPAC to using a claw machine at an arcade: you may get something great, mediocre, or perhaps absolutely nothing3. In addition to the inherent risk, an explosion in supply is rarely a good thing for returns. And yet, in 2021 the trend continues into speculative territory as shown in the chart below: 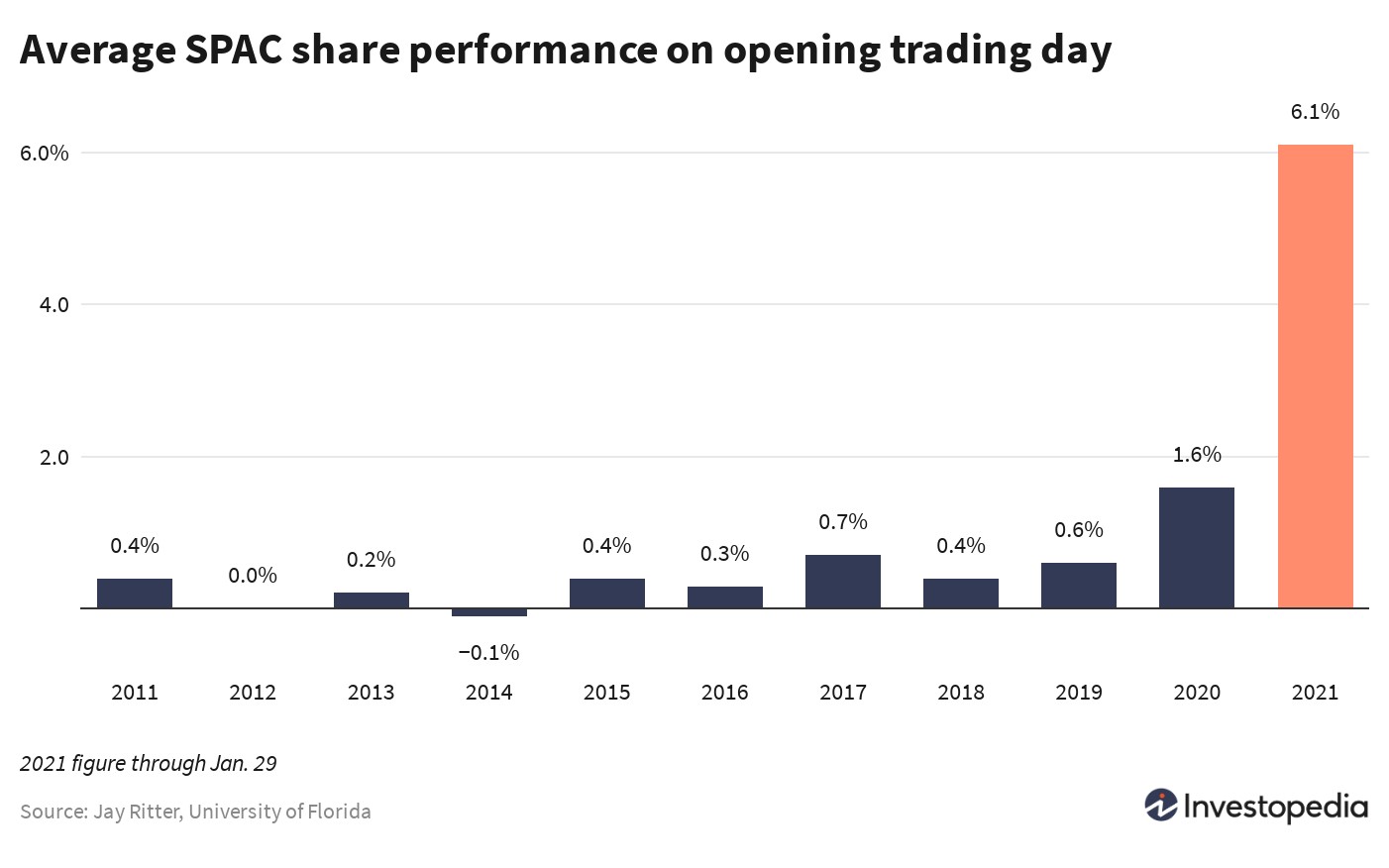 Beyond risk measures, but connected to the idea, is time horizon or the expected length of time an investment is to be held.  Investing is typically long-term, ideally longer than a year’s time, while speculation is short-term, generally less than a year. Speculation can even involve bets made intra-day. As the pandemic forced people into their homes and stocks into the gutter last March, many resorted to trading stocks for entertainment or distraction, turning them into overnight day traders on platforms such as Robinhood or other online brokerage firms like Fidelity, E*trade, or Schwab. 10 million new brokerage accounts were opened in 2020 alone4.

With those new accounts and volatility in the markets came additional volume. Average daily stock trading volume went from 7 billion in 2019, to 10.9 billion in 2020, to now 14.7 billion in 2021 so far according to Piper Sandler5. And those trades aren’t just happening in the big market favorites such as Tesla, Amazon, Netflix and others, but also in lesser known names and even bankrupt and unprofitable companies. Hertz, for example, sought to issue shares last year amidst a bankruptcy filing, claiming even as it was raising capital that the shares were most likely worthless. The stock surged! Hertz did eventually pull the offer due to SEC reservations. Further, in the remarkably short period since December 2020, the Goldman Sachs Non-Profitable Technology index (which measures “unprofitable companies in innovative industries”, including names such as Peloton, Roku, Wayfair, Plug Power, and Nio) is up nearly 400%! Does it sound a little like the dot.com bubble of 1999? Perhaps. Back then, while some of those companies survived, others simply faded into oblivion. No one knows for sure, but this could get ugly.

Speculation and investing differ in the motivation for making the investment, the level of risk, and the timeline. There is also a difference in the investor attitude. Speculation is inherently aggressive and can result in crowded trades in which the “FOMO” (fear of missing out) on the get-rich-quick action outweighs rational decision making. Investing is generally considered to be more conservative in that a decision is intended to be grounded in numbers and facts.

FOMO seems to be at play in the crowded trades of some of the most well-loved stocks. The S&P 500, for example, is more concentrated than ever, with 22% of the index represented by only five companies. For reference, the last time the market was so narrowly concentrated was in 1999 with 18% of the S&P 500 represented by five companies. Concentration is often associated with heightened risk, so this is concerning.

We also see evidence of aggressive trading, and risk taking, in the types of investments being made. Trades have not been limited to stocks purchased at high prices but have extended to riskier options trading. Volume in the purchase of single stock options grew nearly 70% in 2020 as compared to 2019! These single stock option purchases are most likely to come from retail investors rather than institutions moving major funds6.

An influx of new traders, coupled with historically low interest rates and euphoria in the markets, reinforces an overconfidence that money is always made, even in the short-term. We know that is folly. Corrections do occur with some regularity. An increase in the number of speculators has likely also played a role in pushing stock prices to within 1% of their highest valuation based on a price-to-earnings ratio. Speculation in the markets is not universal, though; we shared previously that several segments of stocks, including dividend-payers, stocks with low prices compared to their earnings, and smaller companies, remain cheap. Other areas such as certain mega-cap stocks and stocks with poor or non-existent earnings, however, are in speculative territory and being traded in volumes never reached before.

The markets inevitably cycle between fear and greed. To be clear, speculation is not inherently “bad”. Speculators add liquidity to markets and offer investors ways to hedge their own risks. However, we believe, and investment research supports, that sound long-term investment strategy involves purchasing businesses at reasonable prices and being paid a reasonable amount for a given level of risk. In the meantime, we’ll try to avoid the distraction of short-term speculation.

Related: A Guide on Portfolio Diversification