Is Goldman Sachs Letting Apple Down?

There’s a good old challenge in banking that, in recent years, has been growing. The challenge is to name the bad guy. Sometimes the bad guy is a hacker; other days, it’s a rogue trader; another event points the finger at an employee with a fat finger; but, more often than not, the bad guy is the provider of service to your service who did not service your customer correctly.

The lost payment or a bad customer telephone experience or something similar that can go wrong. Obviously, the more you work with third parties, the  more likely you are to have service hiccups and, most of the time, that’s ok. But not when your company is called Apple.

Apple launched the Apple Card in partnership with Goldman Sachs in 2019. After all of the hoo-hah about the launch, things quietened down. Nevertheless, Apple’s card has been building quite nicely with 6.4 million users by summer 2021, more than doubling the number from a year before, according to Cornerstone Advisors. Much of that success is due to the growing number of women using the card.

Apple made significant gains throughout 2020 in getting the Apple Card into the hands of women. At the start of the year, just 25% of cardholders were women. By December that percentage had grown to 42%.

The reason for the rise of women cardholders may be due to an earlier issue ...

... as the partnership has previously fallen into hot waters due to Goldman’s automated systems rejecting large numbers of applicants based purely on a tick box view:

Goldman implemented an algorithm that either accepts or rejects applicants within seconds. If your application is successful, you’re offered personalized credit terms such as those shown above. If not, you receive an instant rejection letter without an equally fast route to appeal.

That would have excluded a lot of women applicants which, when the algorithms were changed, allowed a more gender-neutral approach. Trouble is that now they’re in hot water again, as media finds their processing of chargebacks is sub-standard.

Chargebacks are payments on cards that are challenged by customers afterwards, either because they claim they didn’t make the payment or because the merchant charged an incorrect amount. What should happen is these transaction challenges would be solved quite quickly by back office customer service reps. Unfortunately, Goldman Sachs has a great front office operation but the back office servicing is outsourced and, yes, you guessed it, appears to be not up to the job.

In fact, by law, chargeback disputes must be resolved within a certain timeframe and, due to failing to meet those requirements, the bank is now being investigated by the CFPB (the Consumer Financial Protection Bureau). This investigation is most likely due to Goldman's reliance on Apple Card, as the majority of Goldman Sachs’ consumer card operations are Apple Card users (it launched a GM branded card in January 2022).

The regulator is looking into Goldman’s customer dealings, “including with respect to the application of refunds, crediting of nonconforming payments, billing error resolution, advertisements, and reporting to credit bureaus,” the bank said.

Hugh Son, banking correspondent with CNBC, fleshes out the issues:

While the bank had automated ways for customers to log disputes through their iPhones, it had done less work on streamlining the resolution of such cases, according to the people. The bank hadn’t initially accounted for what insiders deemed “edge cases,” or situations that break from the norm among the vast majority of transactions, they said.

“We were making the case that we have a seamless way to dispute transactions,” the source said. “But we got no credit for the front end, and we had some failures on the back end.”

Another part of the puzzle is that Goldman relied on three outside vendors to help service Apple Card customers. Known as business process organizations, or BPOs, the sector often struggles with high worker turnover, increasing the odds that a representative is new or not fully trained.

In February, Apple sent some card users notice giving them a chance to resubmit old disputes, according to industry publication 9to5Mac.

The email acknowledged that Apple had “identified that some customer-initiated disputes may not have been resolved correctly,” according to the report.

Hugh doesn’t name the bad guy, unless you look at Goldman Sachs as being it, but does point out that Apple Card has been a great success. After all not many cards get over six million users in two years. 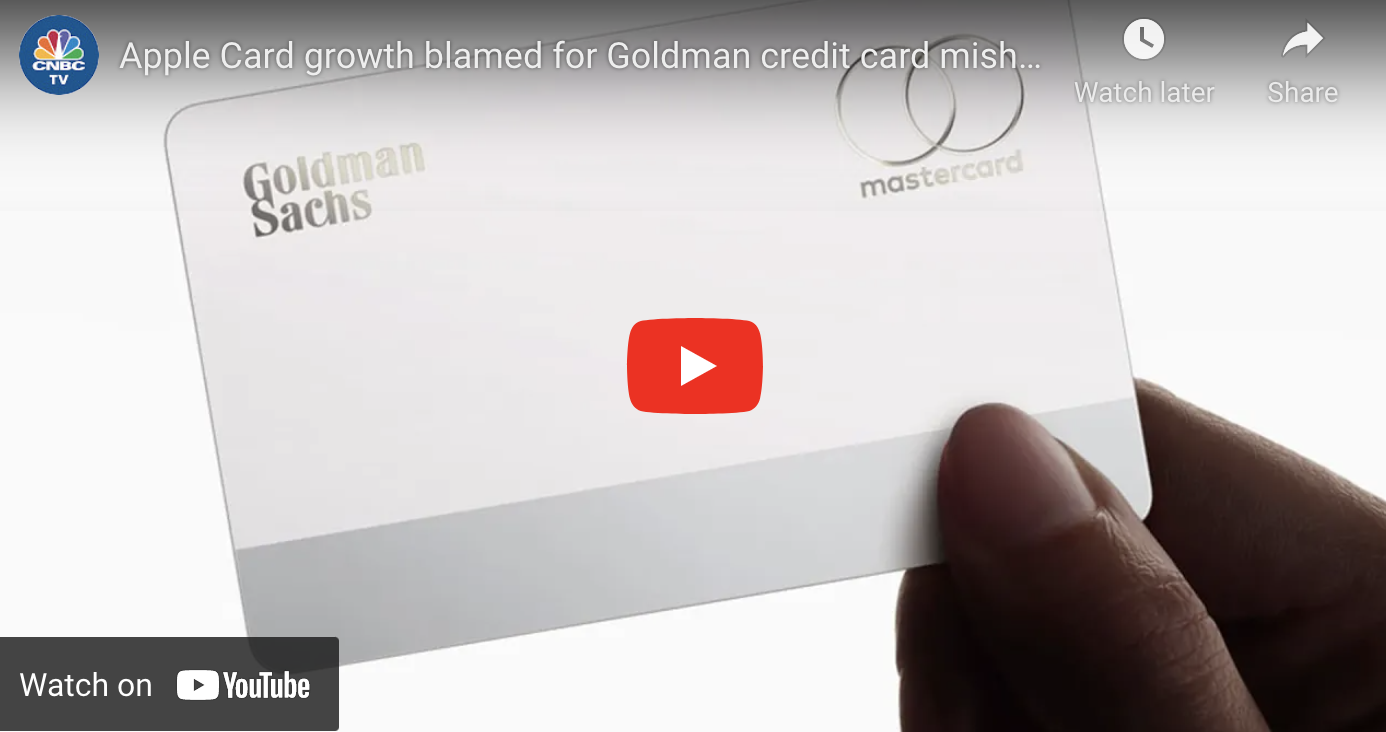 Related: What Is the Global, Digital Currency?