As a child, I had no friends growing up on a remote Wyoming cattle ranch—I didn’t fit in and felt out of place with other kids my age.

As an adult, my first job out of college sucked the soul from me—there were a few hard knocks before I finally landed in a career that spoke to my heart.

As a retiree, after almost 25 years as an FBI agent—I felt untethered and unsure of my next step as I found myself starting a new business.

What I’ve learned is this—it’s always something! Just when I think I’ve hurdled one roadblock, another one replaces it.

I looked to self-help tips that sounded logical, looked easy, and always came with a vague assurance that my life would be different once I bought their program. Headlines that promised a new, better version of myself seduced me. I was attracted by headlines that promised a new, better me. I was left, however, with a growing sense that something significant was left out.

As Albert Einstein said, “Any fool can know. The point is to understand.”

Self-help programs are popular because they prick at our hearts and arouse an emotional response. We want to “feel” a certain way about ourselves or others, so we latch onto worthless pieces of advice, hoping for a different outcome each time. It’s a little like a stupid person repeating the same mistake, each time hoping for a different result.

Marketers know that our emotions directly impact how we think about our lives and our circumstances. In turn, our thoughts drive our behavior.

It’s relatively simple folks, but many of us are too lazy to develop the mental toughness we need to make it through tough times; instead, we complain about the unfairness of life. We cling to old behaviors because they’re comfortable; find refuge in outdated ways of thinking, and allow our decisions to be guided by our emotional incontinence. This laziness breeds a docile mindset that accepts the rut in which it finds itself.

Mental toughness is managing our emotions, thoughts, and behavior in ways that will set us up for success in business and life. Legitimate self-improvement means that we assess and evaluate our emotional, thinking, and behavioral patterns in an honest and accurate way.

Ego often prevents us from seeking the truth about ourselves because the ego always wants us to see ourselves in a favorable light. That’s why we make excuses for our failures, blame others for our incompetence, or shift the blame on those who are weaker and unable to defend themselves.

A lack of self-awareness places blinders on us, but here is the thing—we cannot improve ourselves and our lot in life unless we can honestly look at ourselves.

As an FBI agent, I quickly learned that while theories are nice, evidence is better, so I relied on neuroscience and social psychology to help me find those answers. The deeper I dug, the more I understood how emotions, thoughts, and behavior combine to create a strong mind.

The result is the Mental Toughness Assessment (MTA) that I created and had validated by Psychologist Vanessa Perez from the Psychology Department at Arizona State University (ASU). For a detailed analysis of the MTA (included in the Secrets of a Strong Mind online course), click here.

The last thing readers need is another self-appointed expert spewing self-help quips with no science or evidence behind them. The MTA is an evidence-based tool that readers can use to measure three primary areas: emotions, thoughts, and behavior.

To assess mental toughness, the answers to the questions needed not only to be scored but also weighed in the areas that measure the elements of a strong mind. As a result, each question in the assessment can be traced to one of the following factors: 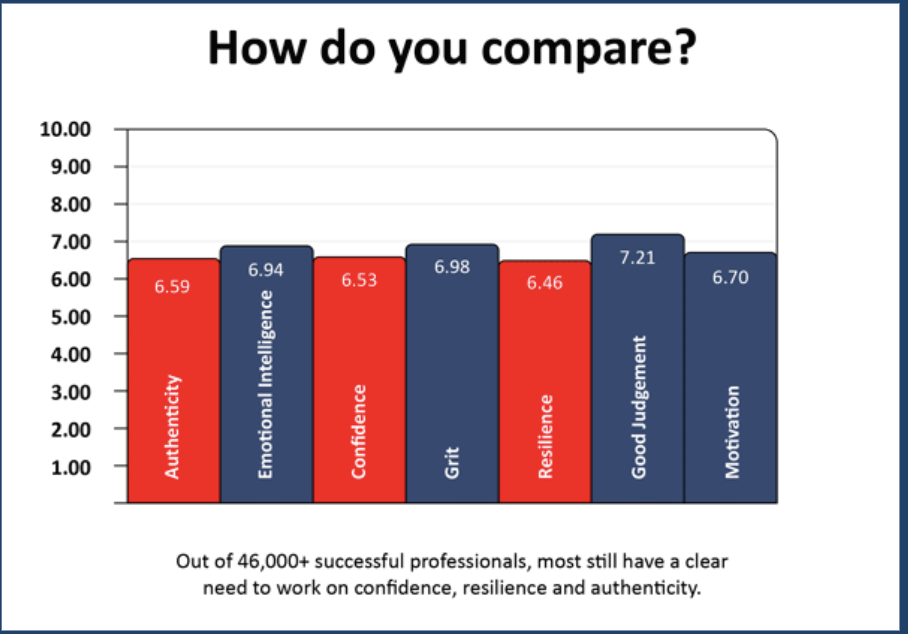 When you take the MTA, your score will show you where you excel and which areas need attention. It’s been taken by over 46,000 professionals, and their scores indicate that most still need to work on confidence, resilience, or authenticity.

Let’s take a closer look at why mental toughness requires that we understand our emotions, thoughts, and behavior:

Our emotions originate from the deeper, more primitive parts of the brain—the limbic system. We start with emotions because they can hijack our thinking brain, and once we lose our head, we’re capable of doing lots of stupid and crazy things. Sometimes letting our emotions call the shots works, but often it does not. Ask anyone who has signed up for a time-share or made an infomercial purchase. Yep, an appeal to our emotions starts the ball rolling.

Emotions are inconvenient because they often warp into difficult ones like embarrassment, remorse, and guilt. Today’s society doesn’t want you to deal with negative emotions because they might make you feel bad. But, folks, that’s the point. Some feelings don’t come with a safety warning on the label so you can feel safe. So, if you’re a jerk, guess what? Your conscience will remind you, often and with intensity, that it is not okay.

Emotions are the hardwired way we communicate and connect with others and our true selves.

In today’s politically correct “woke” world, one of the biggest problems we face is that we often have an emotion about an emotion. For example, you don’t like the gay black woman who sits next to you but feel it’s not okay to not like her because it might make you appear to be racist or homophobic while the real reason you don’t like her is that she reminds you of Aunt Mabel who pinched your cheek as a child and called you “Honeybun.” We can’t even be honest with ourselves about an emotion we feel for fear it isn’t an acceptable one in today’s world!

No wonder we hunker down and suppress our emotions. People are criticized if they misstep, so why take the chance?

It’s far too simplistic and childish to divide our emotions into two piles: good and bad. If we try to judge them, we lose our ability to be aware of them. We avoid destructive emotions because we don’t want them. We may feel ashamed to acknowledge an adverse reaction. We regard good emotions as positive and something we want. We may not monitor them as we should because, hey, all good emotions are friends, right? Unfortunately, the relentless pursuit of only positive feelings produces a hedonistic lifestyle that’s not based on reality.

The truth is: you need both good and bad emotions to function as a healthy human being in this world.

Don’t judge your emotion; instead, recognize each and every emotion but don’t place it into a good or bad pile. Instead, observe it, let it run its course, and remind yourself that the feeling was there to help you understand something about yourself. 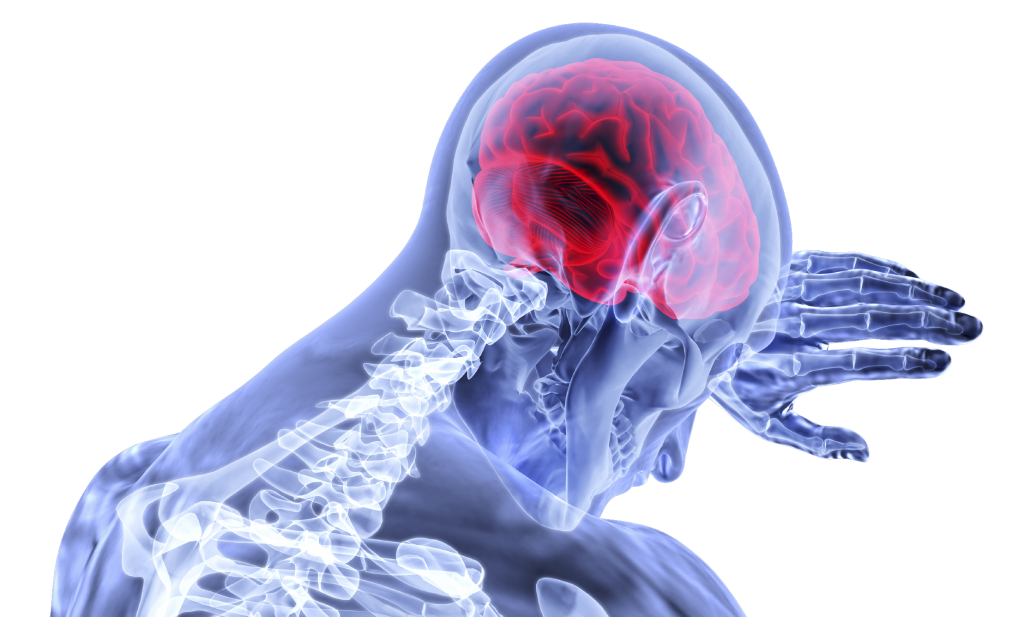 The cerebral cortex is the thinking part of the brain. It finds new ways to analyze and generate solutions; it is more logical in its approach.

But the moment something creates fear or discomfort, we respond by moving into the emotional limbic system. Unfortunately, our emotional brain is 100% self-protective, so it’s not a good place to be when we need to make decisions as we face adversity. For example, the feeling brain can’t discern between anxiety about a threat to our safety and the anxiety we experience when speaking in front of a group of people.

The key to developing a strong mind is learning how to switch gears to consciously move out of the reactive/emotional limbic brain and into the thinking cerebral brain. When we face adversity and obstacles, the two parts of our brain need to work together to make the best decisions.

Until the two brains understand how they each work, the quicker emotional brain can sabotage whatever plans the thinking brain has for your life.

Put yourself in control. When an angry and irrational person confronts you, your emotional brain will match the fury of the other person by each degree. So it’s important to learn to regulate your emotions. Meditation is an effective way to learn how to control both brains because if an emotion surfaces, meditation gently reminds the feeling brain to settle down. In the same way, if a thought pops into your head, meditation gently reminds the thinking brain that it needs to stay quiet.

Take a breath. Focus your attention on the breath because it calms the mind. At the same time, a breath allows your slower, thinking brain time to catch up with the hothead emotional brain.

Appease the emotional brain. It will never stop nagging your thoughts until it feels as though it has been heard. The erudite thinking brain may not want to listen to your petty complaints or acknowledge your embarrassing emotions, but this is where you need to take the time to be honest with yourself.

Unfortunately, the toughest times are also the most formative. Unless we have challenges in life, we will never know what we can do!

The Stoics lived over 2000 years ago, but they understood how to control their mind, which in turn controlled their emotions and subsequent behavior. The Stoics claim that many things we desire in life are not worth the pursuit. Instead, Stoic philosophy focused on developing a strong mind to manage negative emotions such as anger, grief, anxiety, and fear.

One Stoic, Seneca, writes that we should prepare in advance so that nothing ever takes us by surprise. In today’s language, he wants us to develop grit in the face of adversity. We should toughen up before the crisis hits us, so we know how to respond and control our behavior.

Don’t be the person who freaks out at work when something goes wrong. If you can control your behavior, you can handle your situation with finesse and aplomb. Stoicism suggests that we insert a reverse clause into our plans. It reminds you that you have total control over your reaction, even if you can’t control the outcome. Then, when you focus on what you can control, you give yourself a plan of action.

You learn how to create a strong mind when you ask, “What is the worst that could happen?” This is not pessimism; it’s being realistic. You may be strong in one area and not in another. So, take the time on a sunny day to prepare yourself to respond in an effective manner when the storm hits.

Related: How Wellbeing Can Help People Get Through Hard Times