From Vertical Hierarchy To Horizontal Networks: Trust Has Gone Local

For over 20 years, Edelman has attempted to track the progress, or decline, of trust across 28 countries.

After a year of disaster and economic turbulence – the 2021 Edelman Trust Barometer reveals an epidemic of misinformation and widespread mistrust of societal institutions and leaders around the world.

A lot of this is pretty bleak reading, as you might expect. No-one emerges particularly well, with the UK languishing in the relegation places of the league of distrust.

However, there are many positives if you read beyond the headlines. Business is more trusted than Government in 21 countries and is the only institution to be considered both competent and ethical (Government and Media are viewed as neither). Edelman credit this boost to the rapid vaccine distribution and the pivot to new ways of working. These businesses, large and small, that have kept us going over the past year are now reaping the rewards.

Interestingly the study finds that the public considers social institutions – those who operate for ‘social good’ – to be ethical, but less competent. Saying you do good is never enough – you need to be effective to be granted trust.  Indeed , trust has two distinct attributes: competence (delivering on promises) and ethical behavior (doing the right thing and working to improve society).

The most interesting finding in this years report , which arguably builds upon a trend identified in the last three years of research, is a further reordering of trust to more local sources.

People have shifted their trust to the relationships within their control, most notably their employers.

“Trust has actually gone local,” Edelman says. “Business is the most trusted institution, but ‘my employer’ and ‘my employer CEO’ and even ‘my employer publication’ — newsletter — is more trusted than media.” Whoever would have thought that company comms teams could end up being more trusted than the mainstream media? This shift is exciting, but places enormous responsibility on CEOs and their senior leaders.

In a sense, we shouldn’t be surprised that a sudden pivot to local living, working and thinking has had this effect. In a crisis, people take in, process, and act on information differently than they would during normal times.

Under intense stress and overload, we tend to miss the nuances of messages by not fully hearing information because of our inability to juggle multiple facts or not remembering as much of the information as we normally could. We also tend to focus more on the things immediately within our control – and that includes our closest relationships. Community offers people something that Government or media cannot – a sense of belonging in an insecure world.

Of course , communities now include non-place based groups such as online forums, which may not always convey news in a positive way.

As our relationships at work, with peers, with teams, and with our CEOs become more important, it seems like a time for us to rethink how we move information around the organisation and build valuable relationships that are more horizontal, more local. 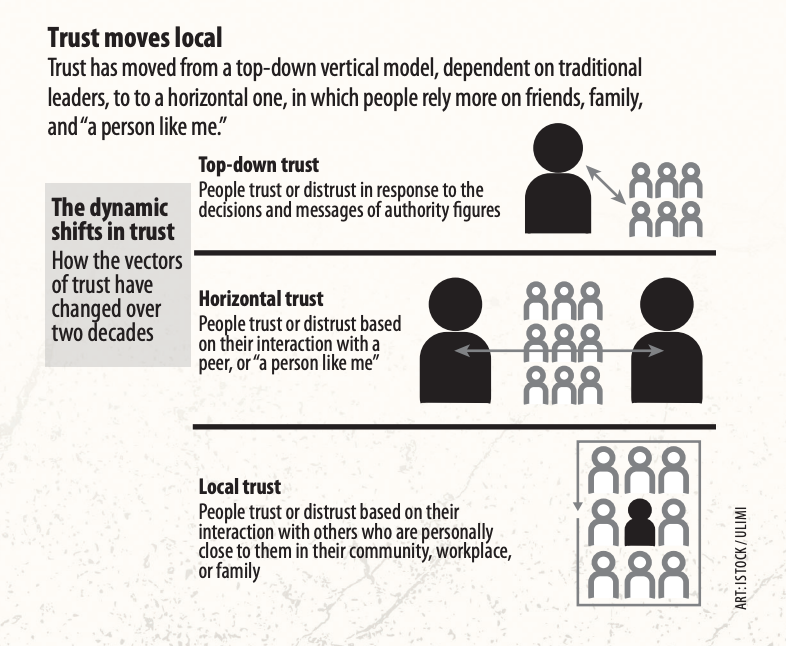 Just as trust has gradually been shifting from a top-down orientation to a horizontal one, this has now gone a step further – people are turning to that which is close, local, and personal. 69% said they trust “people in my local community”.

It would be easy to see this move to local trust as a responsibility for leaders, but in reality it’s anything but.

Yes, leaders need to shift from a hierarchical command and control model but equally we all have a role building trust at a local level.

We are at an inflection point where there is clearly an urgent need to look at how we communicate at the same time as a burgeoning desire from the public for business and community to work together to solve problems rather than just wait for Government.

Some of the themes we’ve discussed for some years on this blog, with my network, and many others – are now cohering. Covid-19 has accelerated everything, not just vaccine development.

Healthcare, poverty, climate change, societal inequalities, are often things we see as other people’s problems but as Edelman say – this is the time for institutions, leaders, citizens to work together, laying the groundwork for a new era of trust.

When trust is local, every interaction we have with our family, our colleagues or our community is a potential trust builder or killer.

Related: Why We Bend The Rules And What To Do About It

Images in this post are from the 2021 Edelman Trust Barometer