Do You Know What Interest Rates You Are Paying On Your Credit Cards?

As inflation continues to rise and be top of mind for the average household, we want to continue discussing how it is affecting our daily life and how to navigate this adjustment. Prices of nearly everything have been skyrocketing over the last few months, and a recent CPI report announced a 8.5% year over year increase in March. This is the highest inflation levels have been in four decades, so it’s certainly making an impact on the wallets of individuals. In fact, according to Moody’s Analytics analysis, inflation is costing the average American household an additional $327 per month.

So, as Americans face new and higher costs that impact their monthly and yearly budget, it is likely many will begin to cut back on their typical spending habits. The following tweet from Liz Ann Sonders shows that ~84% of Americans are expecting to slash their spending to account for inflation. How wIll you be adjusting your budget this spring and what strategies are you going to impose on your current spending habits to adjust to the higher cost of living? Maybe you’ll curb some travel and dine out less? Or, maybe you’ll cut back on “extras” that you might typically enjoy? If you are already changing some aspects of your spending, you are certainly not alone. 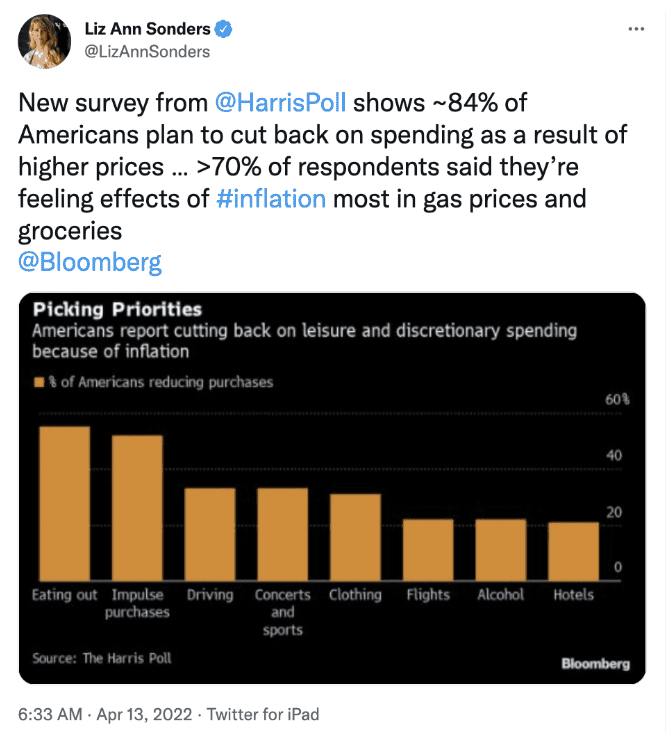 While we are discussing the strains inflation is inflicting on the households of many, we want to touch on another interesting tweet we saw  – this one about credit card rates. Do you know what the current rates are on your credit cards and lines of credit? So many individuals are carrying credit card debt and do not make it their number one priority to pay it down. As you can see in the tweet below, the average credit card rate rose to a 2-year high of 16.43%, and is only going to rise more as the Fed plans to continually hike rates in order to combat inflation.

If you are carrying credit card debt, make sure you are aware of the interest rates each of these debts incur. You should be attempting to pay your debt with the highest interest rates down first so that you aren’t continuing to pay an exorbitant amount in interest each month. With rates only continuing to rise, you should start thinking more about the interest rates you are currently tied to and your finances as a whole. Setting up a plan to pay off your debts in a timely manner will be extremely advantageous to you and your finances in the long run.

Related: Why To Start Early When Saving and Investing