Divorce Steps to Know Before the Dance

Michael and Helen have been married for over 17 years. They met in a sort of ideal, fairytale way in college. Throughout their marriage, they have had 3 children, two girls and one boy, ages 16, 12, and 7. They also were partners amassing a small fortune in their coffee shop business. Up to this point, their union had been one of ideal and textbook perfection. What went wrong? Things that can, and many times do go wrong…life itself. People change. And when they do, their goals, allegiances, and commitments oftentimes do as well. Regardless of what happened, their partnership has dissolved. How do they divide their assets, memories, and life between the two of them in an equitable fashion? Who gets custody of the kids and who pays for what? These are the contentious questions asked during a divorce. It is an unpleasant experience but if it must happen, thankfully, there is a smarter way to proceed for all parties involved.

In 1979, the movie Kramer vs. Kramer debuted at the height of the divorcing trend in our country. Besides the obvious star power of Meryl Streep and Dustin Hoffman, the film was impactful in the topics covered and in the actual experience. The movie was a true sign of the times and remains one of the better movies on the subject. The good news is that rates of divorce have declined since that time (see chart below). 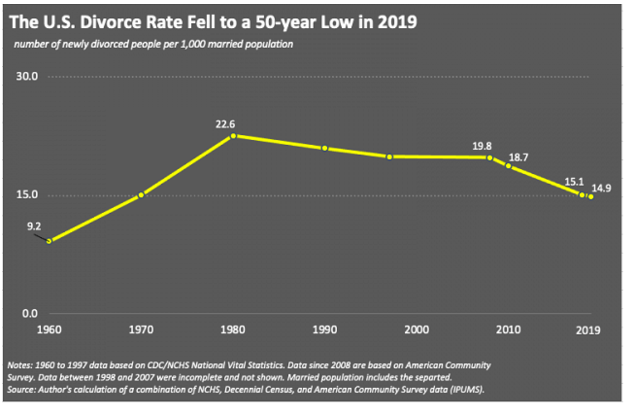 In 2019, for every 1000 marriages, only 14.9 ended in divorce as opposed to 22.6 in 1980. However, the issue is still very much a reality in our society, and by age 62, about 41.6 percent of people have been divorced, separated, or married multiple times. And no one escapes the economic trauma as both parties are responsible for the added fees and related costs incurred throughout the process. Fortunately, there is a strategic way to suffer through this ordeal. Before going to court, you should stop and think about what is about to happen and how to come out with minimal pain. An optimum situation would be if both spouses could come to an agreement on their own because the more outsiders involved, the more expensive the process. Before the initial discussion with an attorney, you should consider the following: 1.) The comprehensive cost of divorce; 2.) A review of assets and property to be divided and 3.) The welfare of the children (if there are any).

1. The Comprehensive Cost of Divorce

Divorces are expensive with attorneys charging between $300 and $500 or more an hour. However, they are necessary as each party will need one to obtain proper representation. Paperwork is usually filed in the state’s court of jurisdiction over domestic relations. Fortunately, many states allow for documents to be filed online which can save time and money. Also, there are five primary types of divorce proceedings: Uncontested Divorce, Collaborative Divorce, Mediation, Arbitration, and the Divorce Trial. The Uncontested Divorce is by far the least costly but requires two amicable and cooperative participants. As a result, this may not be a realistic choice. (It may be the reason why you are splitting in the first place.) The Divorce Trial option is at the opposite end of the options as it is the most costly and most painful but is oftentimes the only recourse. Each of these five options should be reviewed and discussed by both parties, as each has varying degrees of effectiveness and expense. Also, taxes on assets transferred are possible and likely if not executed properly

2. Review of Assets and Property

There are choices to be made regarding the division of assets and the properties to be included. First, possession of assets is in large part decided by the state of residency. Most states follow Common Law, meaning that property acquired during the marriage must be divided on an equitable basis. Note that this does not mean a 50/50 split. Rather, it means division in a manner that is “fair” when considering lifestyles, how the assets were acquired, state procedures, etc. A divorce attorney is usually helpful in interpreting what “fair” means for you. But not all states follow common law. Currently, nine states (Arizona, California, Idaho, Louisiana, Nevada, New Mexico, Texas, Washington, and Wisconsin) are Community Property states. In these states, property is jointly held by both spouses and the ownership of most assets is indeed 50/50. Exceptions can pertain to property held by an individual before the marriage, lawsuit awards, and inheritances. Again, the particulars of the exceptions are dictated by each state. Although the division of property can be easier in Community Property states, the process can still get complicated and require attorneys to represent their best interests. Furthermore, as in the case of Mike and Helen, where a small business is involved, a valuation of the company is required. There are three or four ways to value a company, requiring a professional to choose the best method. Business appraisers charge hefty fees but are usually necessary and required for equitable distribution.

3. The Welfare of the Children

The best interests of the children can usually be assured with an amicable agreement on care, but custody battles are very common. The rights of custodial parents are crucial and will be a primary part of court decisions on child support, alimony, and post-divorce payments. In addition, blended families (families with children from prior marriages and relationships) are increasing and presenting a new set of issues to be considered. For example, if a divorced party has a new partner, he may want a QTIP Trust to help the new spouse upon death and ensure that the remainder goes to the children of the first marriage. Another example is that sometimes the incomes of the custodial parent, the non-custodial parent, as well as new spouses, may all be considered when applying for college assistance for the child. As you can see, divorce planning is becoming an essential part of traditional financial plans.

Along with the major issues just noted, keep in mind the obvious but often neglected fact that upon separation, a revision of wills, beneficiaries, trusts, and any previous estate planning documents will probably be needed.  As you can see, a smart divorce takes a bit of foresight as there can be many moving parts to the process. At a minimum, a team of professionals is needed: a divorce attorney, an accountant, and a financial advisor can be essential to help coordinate your interests. Also possible is the need for an estate attorney, a business appraiser, and an arbiter. As you can surmise, none of them come cheaply. But as expensive as they may be, hiring them could save you untold amounts of money in the end.

Again, the least expensive route is to agree as much as possible on the division of possessions and custody of children. If an angry, seemingly inconsolable spouse is involved, kindly explain that more disagreements could result in higher costs and less available assets. Remember, “a million multiplied by zero equals zero.”  But we’ve just discussed the monetary costs. The emotional pain and trauma of everyone involved may not result in any amicable agreements…which is where planning becomes more imperative. Hopefully, Mike and Helen will be able to put aside any resentment and hard feelings from the relationship and properly plan a smart divorce. Doing so requires much planning and coordination. Divorces can be very tricky and there is no one “right way” to proceed.

Related: Financial Infidelity: When Money Secrets Add Up to Betrayal