Well, if you’re like me, you’ve been staying indoors, whenever possible, this summer and avoiding the record-setting heat. Unfortunately, if you are inside, you have probably been unable to avoid a news channel or two. Likely, you have heard talk of the latest political football – the new Inflation Reduction Act that Congress is trying to pass. While you may be painfully aware that inflation has been running amuck through most of this year, you may be unaware of the details of the new bill that Congress is trying to push through to address it…much less how it might affect you in your daily life. But this piece of legislation is one you should follow.

Sounding innocent enough, the Inflation Reduction Act is a landmark bill that proposes to spend $260 billion and make investments in taxes, climate, and healthcare. The main goal of the proposal is to lower inflation by doing two things: increasing taxes and lowering costs. The rationale is that if you raise taxes on corporations and high-earning individuals, you will reduce the deficit. In theory, large budget deficits decrease private borrowing, decrease net exports, increase interest rates, and ultimately result in higher taxes and inflation. Therefore, reducing deficits, in the shorter-term, should result in a smaller accumulated debt and less risk to the longer-term economic growth of the economy. The Increasing Taxes portion of the legislation aims to impose a minimum tax rate on corporations with over $1 billion in income at 15%. The additional tax income is predicted to decrease the deficit by $313 billion. It would also close an interest tax loophole for private equity and hedge fund managers that currently allows them to pay lower taxes on some compensation. The predicted additional tax income – is $13 billion. It would also allocate $80 million to the IRS over the next 10 years to make them more efficient at paying taxes. For a more in-depth look, an itemized summary, provided by Committee for a Responsible Budget, is included on the last page of this article. (See the Addendum). But will this legislation reduce the deficit?

Prominent economists like Joseph Stiglitz and Nobel Prize winner, Robert Solow, agree that this bill will be impactful. The bi-partisan Congressional Budget Office (CBO) has analyzed the data and concluded that the legislation is likely to reduce the deficit by over $100 billion over a span of 10 years. But who’s to say? Since the bill is still being hammered out, it will be closer to $300 billion if the proposal’s final taxation rules are adjusted. Also, it would increase the supply of oil reserves and national energy resources, thus reducing the demand drag causing inflation. Naturally, there is a huge debate around whether this piece of legislation will live up to its name. Of course, those who are more Republican-oriented are going to be more inclined to say that it is nothing more than a huge tax increase and a further expansion of government. And that makes sense. Why should they give Biden and Democrats kudos during mid-term election season? Also, many ask a fair question - hasn’t it been the job of the Federal Reserve to moderate inflation and not Congress? For sure, there are things that the House and Senate can do to enact fiscal policy. Legislating the economy by passing laws can work, but past attempts have had a limited effect.

To be objective, $100 billion, while not fantastically impactful, may provide some sort of short-term relief. A $100 billion net reduction would reduce the national deficit by about 4%. It’s a start, but will the deficit be decreased enough to lower inflation? When analyzing the meticulously examined, well-supported arguments (both pro and con), the fairest judgment to render at this point is that the bill “could or might lower inflation… in some kind of way…”  Will it be as impactful as claimed? There are simply too many factors at play in today’s economic landscape to give a more definitive answer at this point. Also, there is the possibility that the bill will be massaged further before it is passed. It may well be a step in the right direction overall, but its ultimate impact remains to be seen.

So, what does this mean to you and your situation? This is where the Lowering costs part of the bill’s goal is supposed to fit in. The rationale is that if the costs of everyday goods and services for most Americans are lowered, families would have more money to save. While the influence of this bill on inflation is more uncertain, its impact on you could be more tangibly felt. Here is how the Reduction Act could directly affect you:

These three points can significantly impact your daily life as they can add additional tax credits to your bottom line. It can make healthcare more easily accessible for many and lower costs that you and I will end up paying for in the way of funding care for the already uninsured. Ultimately, this could be a win longer term…just know that we might have to pay for it some way in the shorter term. Oftentimes, Congressional legislation has a way of doing that to us. Hopefully, this has been enough to spark an interest and gets you following proposals that will or could impact your life. 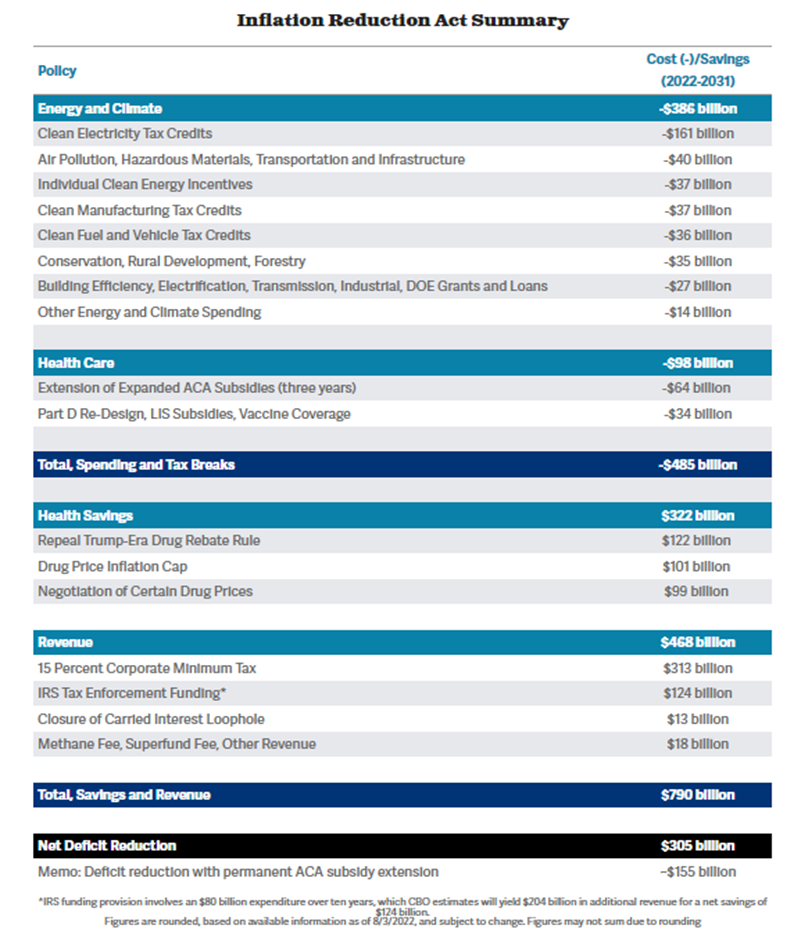