What’s Next for the Bank of Japan?

AllianceBernstein (AB).Across the developed markets, central banks have embarked on a tightening path—with one exception: the Bank of Japan (BOJ). Will Japan’s central bank soon follow suit? To answer this question, we need to first review the hands that Japanese policymakers have already played.

The Path to Negative Rates and Yield-Curve Control

First, in 2013, the BOJ raised its inflation target from 1% to 2% to tackle chronic deflation—but this target proved tough to achieve.

So, in January 2016, in a renewed attack on chronic deflation, the BOJ adopted a negative interest-rate policy (NIRP) by cutting its policy rate to ¬–0.10% and massively increasing the money supply by buying long-term Japanese government bonds (JGB). The market reacted badly. The yield curve flattened, bank stocks fell sharply, and the Japanese yen strengthened—the opposite of the intended effect.

Consequently, in September of the same year, the BOJ added a new tool: yield-curve control (YCC), with a target of zero percent for the 10-year JGB yield and a commitment to ongoing expansion of the monetary base. YCC achieved its intended effects, steepening the yield curve (Display) and boosting inflation expectations. Bank stocks recovered and the yen weakened (thanks in part to a strengthening US dollar). 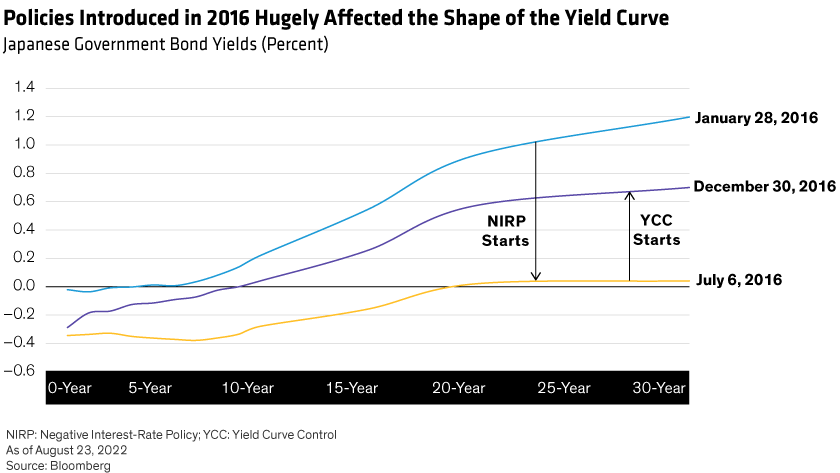 Today, six years later, NIRP and YCC remain in place. But recently, some quirks in the Japanese yield curve have indicated that investors expect the BOJ to start to unwind these policies. For example, immediately prior to the BOJ’s June 16–17 meeting, dislocations appeared in the yield curve near bonds targeted by the BOJ for purchase in unlimited quantities at a yield of 0.25% (Display). 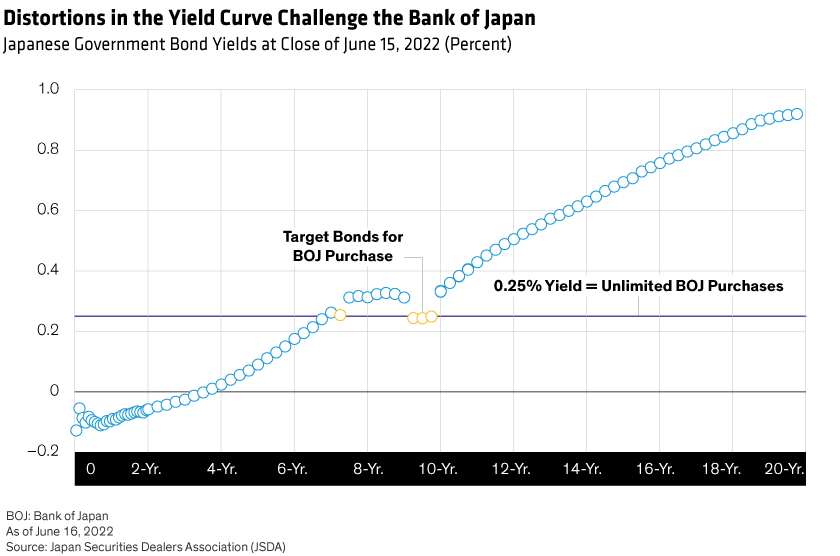 This isn’t the first time the market has challenged the BOJ. Over the past three decades, foreign investors have frequently taken speculative short positions on Japanese bonds, in a trade now commonly referred to as a “widow maker,” given the ongoing strength of this market.

Compared to the size and pace of Federal Reserve and European Central Bank tightening, a potential tweak to YCC or a 10-basis-point hike to exit NIRP seems too small to have much economic effect. But we must keep in mind that the BOJ introduced YCC in large part as damage control following NIRP. Thus, we think near-term pressure to change current settings is more a political than an economic decision.

It’s hard to quantify political pressure, but we are paying close attention to two indicators:

Terms of Trade. Terms of Trade refers to the level of import prices versus export prices in an economy and may provide a gauge for how much Japanese households are being affected by a weaker yen and higher commodity prices. Today, Japan’s Terms of Trade are at their lowest level in over 25 years, keeping political pressure at bay.

Government Approval Rating. Until very recently, Prime Minister Fumio Kishida’s cabinet approval rating was above 60%, limiting political pressure for change in existing policies. But the assassination of former Prime Minister Shinzo Abe and subsequent investigations may have ended this period of political stability.

Abe’s assassination has drawn attention to a religious group’s potentially close ties to the Liberal Democratic Party—the ruling party to which both Abe and Kishida belonged. Kishida’s cabinet approval rating plunged to 52% in mid-July and to 36% in mid-August. As political pressure increases, we see increased potential for Kishida to engage with the BOJ and push for changes to policies to support his popularity.

Keep One Eye on the Japanese Government Bond Market

While the Bank of Japan isn’t under significant or immediate pressure to reverse its current policies, global bond investors should keep an eye on shifting near-term pressures.

Aggressive government intervention under a strict YCC policy has already reduced liquidity in the world’s third largest bond market. If the BOJ does change its policy stance, the initial impact will likely be limited in terms of volatility. However, it’s also likely that, soon thereafter, the market will start to extrapolate further policy changes. That could reduce liquidity even more, increasing risks for bond investors.

That’s why, in our analysis, this situation is worth watching closely.