What Investors Can Expect in the New Political Environment

Having already secured a majority in the House of Representatives, the Democratic party has surprised markets by securing an effective majority in this week’s Georgia run-off elections.

What to potentially expect:

~$1.5 trillion (~1% per annum of GDP) in infrastructure spending over a decade with a focus tilted toward green energy (or just under 1% of GDP annually)

Which policies are potentially unlikely?

But President-elect Biden still faces a level of 'gridlock'

Recounts and legal challenges over Reverend Raphael Warnock and Jon Ossoff’s respective wins may feature for a month until Georgia certifies the result. Assuming nothing unexpected occurs, Senate seats will be split at 50/50 between Republicans and Democrats. In the event of a tied vote, any bill will go to Vice President-elect Kamala Harris’ desk for a deciding vote.

As such, President-elect Biden has the potential to be better able to execute on some of his campaign promises, but much of his agenda potentially will still be curtailed.

Most pieces of legislation require 60 votes in the Senate, due to the filibuster. In today’s polarized world, finding the extra 10 votes would be a tall order on most of his agenda.

There is one potential game changer and that would be removing the filibuster, something 50 votes would be enough to achieve. However, the Democrats would need the support of every single one of its Senators to pull this off, but this is unlikely given the presence of a few moderates.

In particular, pay attention to West Virginia Senator, Joe Manchin, the most moderate of the Democrat caucus. In 2010 he even aired a campaign ad where he literally shot the Democrat cap and trade bill and had been vocal about maintaining the filibuster.

The most effective way for the Democrats to pass new fiscal spending initiatives with 50 votes will be “reconciliation,” which allows spending and tax measures to pass if they do not contain regulatory policy changes. This was, for example, how the Republicans passed the “Trump tax cuts” in 2017.

However, it will limit the Democrats to only one spending and one tax bill per fiscal year (or just one bill if it includes both spending and tax measures). Reconciliation therefore needs to be used strategically. There are other technical requirements, the most pressing of which is that the bill must not add to the deficit after 10 years (which is why most of President Trump’s personal tax cuts are only temporary).

Even using reconciliation, the Democrats still need all 50 of their Senators on board, meaning potential compromise will be needed within the party first.

After the latest COVID-19-relief bill came well below the Democrat’s roughly $2.5 trillion ambitions at approximately $900 billion, the party may look to pass an additional package in March.

However, with the presence of moderate Senators like Manchin, we expect Democrats to moderate their ambitions and use their reconciliation powers for the fiscal year, which would potentially push other agenda items until the fourth quarter of 2021 at the earliest.

Reconciliation rules may require some tax hikes to finance the party’s spending programs. We believe this means these tax hikes are unlikely until the end of the year at the earliest. 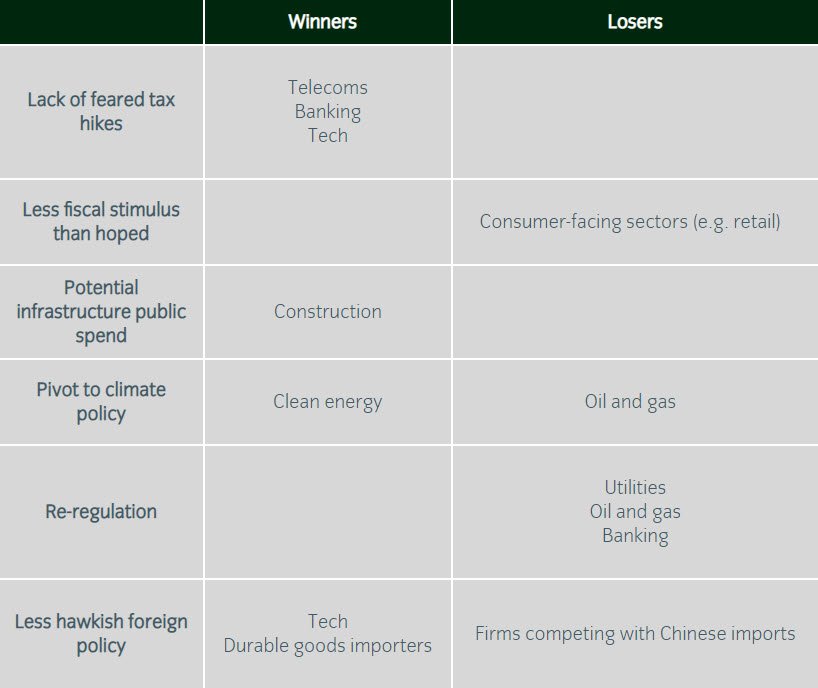 Related: Hold Your Horses on That Blue Wave