What If the US Yield Curve Inverts?

As the US Treasury curve approaches the point of inversion—where shorter-term yields are higher than longer-term ones—investors are taking notice. Historically, an inverted yield curve has portended a recession and weak financial markets.

Yield-curve inversion is defined by the two-year Treasury yield being higher than the 10-year yield, or the five-year yield being higher than the 30-year yield. Which measure the observer chooses doesn’t especially matter—it’s the general inversion that counts, because an inverted yield curve is exceedingly rare (Display). Past episodes of curve inversion have been short-lived; the curve tends to re-steepen once the economy is in recession and credit spreads have reached their cyclical peaks. 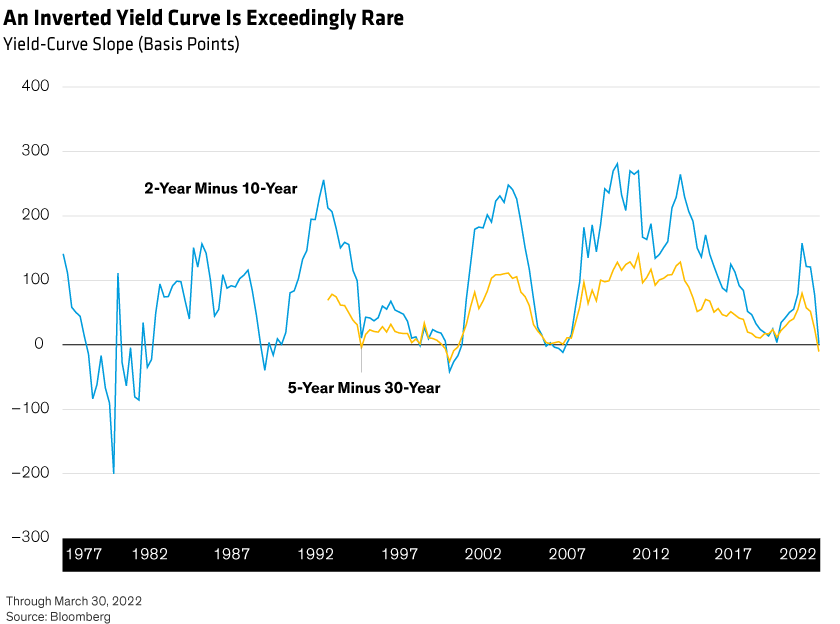 Investors view an inverted curve as a recession indicator because it typically accompanies a US Federal Reserve hiking cycle that cools growth—sometimes too much. Today, market participants worry that the Fed has fallen behind on battling inflation and thus is poised to hike aggressively, potentially triggering a recession and putting the squeeze on growth assets. Indeed, widening spreads and higher volatility have accompanied recent curve flattening.

With inflation running uncomfortably high, we agree there’s an increased risk that the Fed will need to hike rates to the point of recession, even as they aim to engineer a soft landing.

However, there are other conditions that could well explain today’s flattening: years of quantitative easing, low global yields and above-target inflation that’s expected to decline as the Fed hikes and supply-chain disruptions resolve.

For instance, inflation-adjusted, or real, yields derived from Treasury inflation-protected securities are deep into negative territory and close to their historical lows. But this real yield curve remains relatively steep. The contrast between the slopes of the nominal and real yield curves suggests that 1) market participants believe in the durability of economic growth, and 2) the flattening of the nominal curve is driven by (short-lived) inflation expectations rather than fears of recession.

Additionally, there are no obvious imbalances in the US economy, as consumer and corporate balance sheets appear healthy. Economic cycles require prolonged periods of growth for borrowers to build unrealistically optimistic scenarios into their borrowing programs. An economy without such imbalances should be better able to handle a Fed hiking cycle, making recession less likely in the near term.

Be Cautious, Not Fearful

Despite the attention it garners, yield-curve shape is a poor predictor of near-term returns. In fact, risk assets have historically done well for six months to more than two years after the curve inverts. In other words, it’s not time to run and hide from risky assets.

Nonetheless, investors should be aware that tail risks are elevated, and volatility is likely to remain high over the near term. Exogenous shocks will be exacerbated whenever there’s less cushion in monetary policy. It makes sense to be cautious around assets that could be adversely affected.

That said, given much higher yields and wider spreads today than just a few weeks ago, valuations look attractive for select risk assets and may eventually cause investors to return to the markets, adding further price support. For now, investors should be selective and focus on liquidity and quality, as well as yield.

Related: Can the World Live Without Russian Oil?