What Do Valuations Typically Do in the Aftermath of Bear Markets?

The broad equity market as measured by the S&P 500 index has rebounded sharply off the March 23 lows gaining 41.7% (price basis) as of this writing (3/23/20 to 7/08/20). The 2nd quarter return of 20.0% is the highest since the 4th quarter of 1998. But while prices moved sharply higher over the quarter, earnings per share (EPS) for the benchmark have begun to reflect the economic toll of the pandemic. 1st quarter EPS for the S&P 500 declined 14.5% (year over year) and 2nd quarter earnings – which are just getting under way – are expected to decline a staggering 44.1% from the year prior.

A logical consequence of higher prices and lower earnings are valuation multiples that might cause some concern. The trailing price-to-earnings ratio (P/E) of the S&P 500 is currently 22.2, higher than long-term averages. What do valuations typically do in the aftermath of bear markets? Let’s look at some historical data to provide context and set expectations going forward.

A look at individual bear markets over the last 20 years (there have been six as defined by Ned Davis Research) show a similar pattern – at this point in the cycle valuations tend to be elevated as falling earnings meet rebounding prices. Specifically, the P/E ratio of the S&P 500 has peaked at 22.1 approximately 147 days (4.9 months) after a bear market bottom, on average.

With an average post-bear market peak P/E ratio of 22.1 the current level of 22.2 seems, well, average. However, as 2nd quarter earnings season kicks off with some pretty bleak forecasts for the remainder of the year, it could potentially cause further multiple expansion even if prices pull back along the way. Previous valuation cycles peaking later and higher would suggest we could have room to run.

FactSet estimates the S&P 500 will return to earnings growth in the 1st quarter of 2021. With this in mind, we would expect valuations to remain elevated through the remainder of 2020 before some relief in 2021, assuming earnings register near current projections.

Taking another look over the last 20 years, even when P/E ratios peak following a bear market, equity returns tend to be positive 12 months later with an average return of 4.95% and a median return of 11.57% from the peak as laid out in the table below. 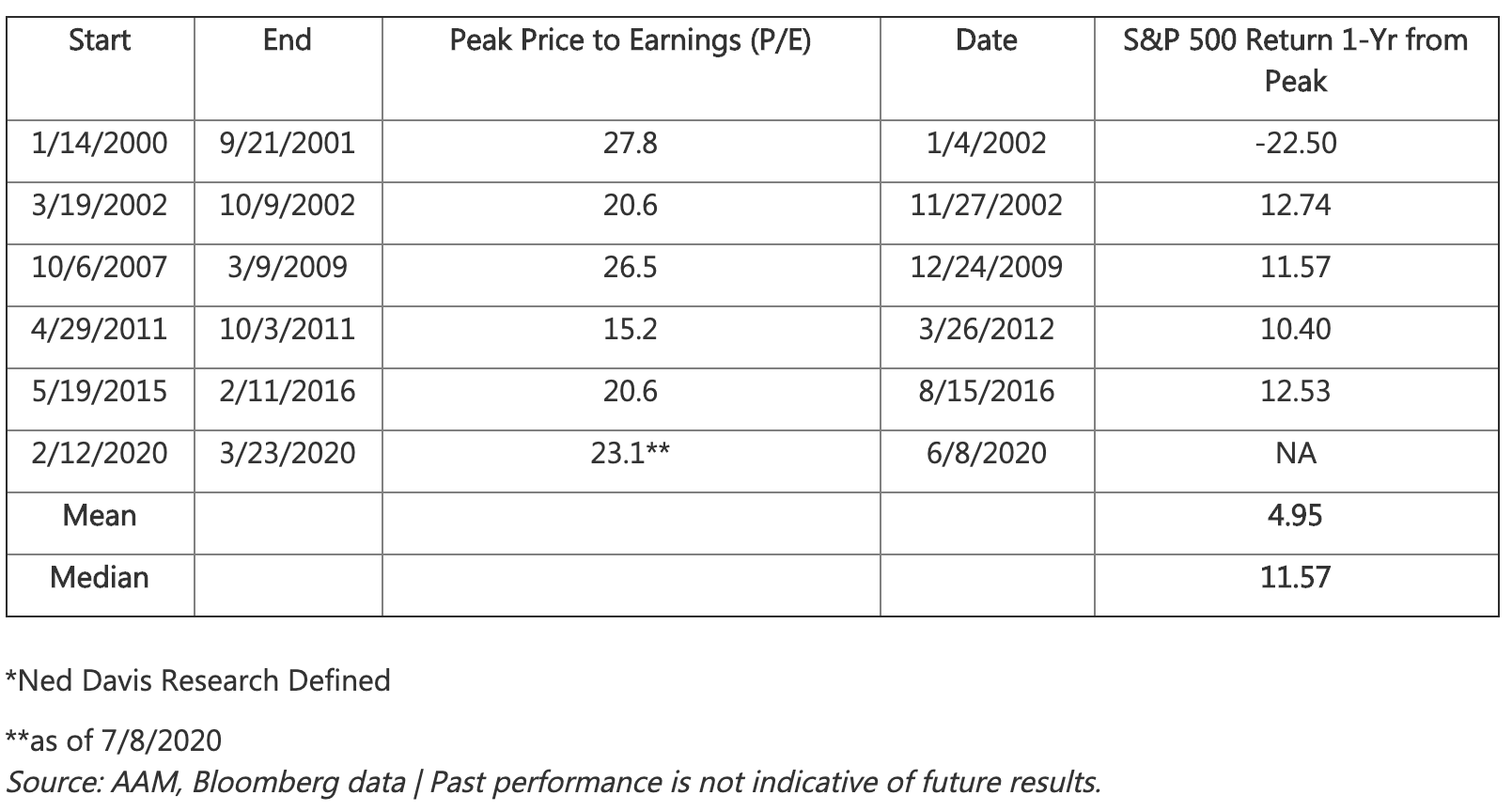 Are above-average valuations a concern? Always, but in context it appears we are following a normal bear market valuation cycle and long-term investors have the potential to still be rewarded at this juncture as the economy and earnings recover.

Related: Buy on the Cannons and Sell on the Trumpets