The third quarter of 2022 ended as the year has gone for nearly every asset and debt class with selling of in the end. The markets, the economy, the expectations, and the negative feedback loop that is proliferating in its anxiety as well as its smartest bear challenge only continues in the near term. While many will have their culprit as to whom to blame, patient zero is inflation.

Investors have had a front row ticket to the inabilities of the academic-led Federal Reserve in dealing with a monetary and behavioral-based problem. Much like the many debates about how Communism has never succeeded being countered by “It will work this time,” the debate about Modern Monetary theory being a harbinger for devastating errors is being countered by “It worked for Japan for decades without consequence and it will work here due to the immense amount of wealth in the United States.” Ultimately these diametrically opposed viewpoints will become moot as the focus will be on fundamental market returns being positive…and the economy needs a lifeline. While we are not there quite yet, it certainly will get there much quicker than not.

The pace at which the Federal Reserve has had to catch up to the forgotten evil of inflation is striking. When we came into the beginning of the year, the Fed Fund futures were pointing to a final 2022 Fed Funds rate of 0.82%. As of Friday’s September 30 close, the expected year end Fed Funds rate is 4.23%. So, while the Federal Reserve is still sticking to playing catchup, the markets had to do the same. The underlying premise was the pattern of inflation being transitory would play out as it had the last 30 years. We began to see those major underlying forces that would have made it transitory were exhausted and we were going back to the economic framework of 1960-1991 when recessions occurred at twice the rate of the last three decades. As well, investment management had to shift to be more dynamic, tactical and have a stronger overlay of professional and highly selective managers. Consider the tables of the Fed Fund Futures from Bloomberg. 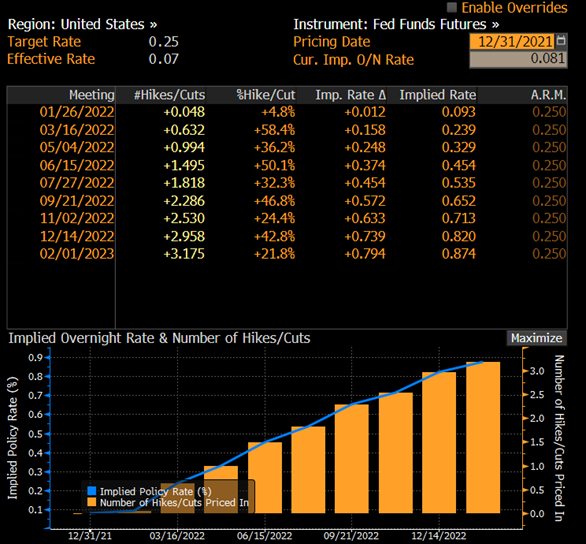 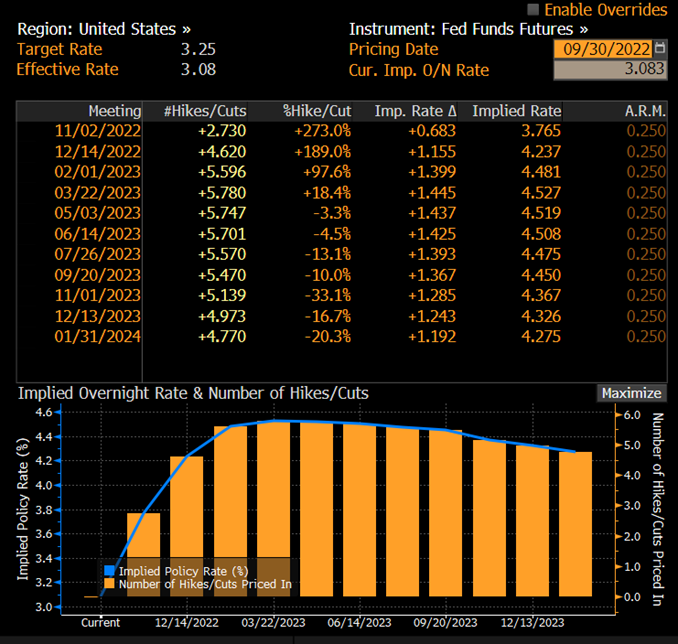 The mandate of the Federal Reserve seems to have shifted in the last few weeks. Traditionally the mandate for the Federal Reserve is employment maximization, inflation mitigation and ultimately creating fluidity in capital markets. This last week it now seems the next quarter is moving to the three C’s: Credit, Currency, and Crisis Management.

This has to do with the ultimate symbiotic aspect of the global economy and the synchronization of global central banks. We have been speaking around the country to our many clients about the synchronization of central bank policy being hawkish only leads to contagion of risk. To visualize just how synchronized the global central banks are, let’s review this chart from Bank of America below. While it isn’t up to the month as the rate hikes have only increased in the last 30 days, it gives a sense of just how rare and globalized the inflation problem is.

So far, the credit markets have held up much better than one would expect when you compare the strained capital markets access for companies due to higher rates, the increasing amount of job cuts form companies and earnings revisions moving downward forcibly for next year. However, in the last year, the spreads on corporate investment grade bonds have moved significantly as the table from Bloomberg shows on the investment grade index and by sector. The green box we added gives the visual how every component of the investment grade bond index has seen spreads rise even as the underlying risk-free rate has risen dramatically.

Once the credit cracks, the Federal Reserve will only see its consternation increase dramatically. One area that is very problematic and shows the global risk off is the dollar appreciations. The U.S. dollar index has had its highest return year to date than any year going back to 1967. This is pronounced in many ways but should also know that since 1967 the total return of the U.S. dollar has been a loss of 6.3% or a negative total return annually of -0.11%. Reversion to the mean comes to mind but the surge may have a bit more to go as the countless global anxieties are not going to be addressed until a few more months at least. 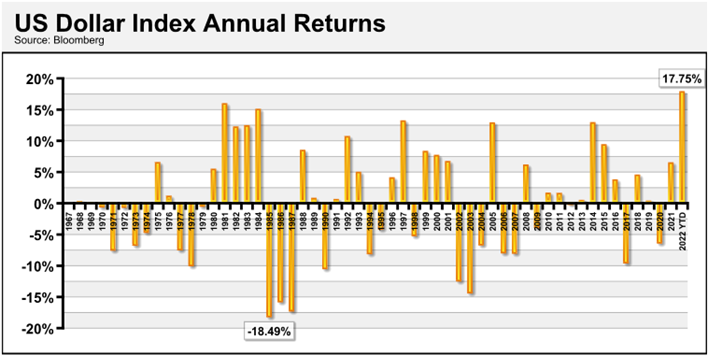 Past performance is not indicative of future results.

The third C is the crisis management that will soon come to the Federal Reserve as it just did to the Bank of England. In the throes of a deep recession — among so many other challenges — the Bank of England abruptly shifted policy by announcing an unlimited amount of buying of the long-term Gilts, which is their government-issued bonds. This flew in the face of the unrolling of their balance sheet that was set to commence and kept rates moving higher. Their currency was also at its lowest level versus the U.S. dollar since 1971. The quantitative easing (QE) initiative by buying the Gilts is diametrically opposed to quantitative tightening that now seems to be tabled. This, however, leaves such an uncertainty in the markets that volatility will only increase, and it justifiably leads to the ultimate end to the Feds concern when the markets show some material cracks. Will they follow suit with what the Bank of England did, or will they stay steadfast until inflation is tame and demand destruction shutters the economy?

The “soft landing” fairy tale is remote and will ultimately have to be salvaged by the Terminal Velocity with which the economy and markets moved downward within the immense liquidity that was built over the last 14 years. That is the basic definition of Terminal Velocity, and the amount of liquidity is seeing strains from draining of household cash balances and the M2 money supply beginning to grow at a much slower if not zero rate.

So, while we enter the fourth quarter with sentiment from all aspects of the economy and markets at extreme low levels, take solace in the fact that markets are way ahead of the economy. Thusly history has taught us those markets hit their bottom well before the we hit the heights of negative news. We may have more to go, but those long-term investors who have large cash positions, may want to look at certain credit markets and value, cash flow-rich companies with high or increasing dividends. Being systematic and methodical about investing in these markets long term is always difficult, but the longer your investment timeframe, the easier it has the potential to become.

Related: 5 Types of Software for Protecting Your Business Practice