My very first blog post was written about a concept called Peak Oil in January, 2010.  I felt it extremely important to inform my readers about the importance of energy to sustain our economy and the the lifestyles we have become accustomed to.  I stressed the importance of researching new technologies to provide energy for future generations.  I also postulated that the U.S. oil production had peaked in 1970 and we had serious energy problems immediately ahead.  About the immediate part, I was spectacularly wrong.  Here is the chart of U.S. oil production from my 2010 blog post: 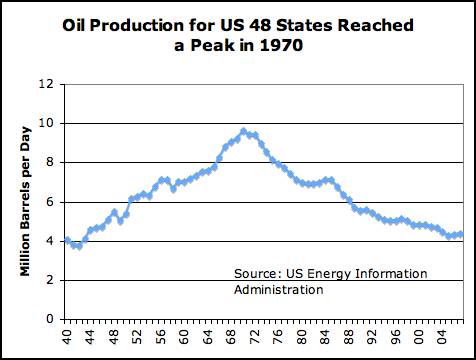 In 2010 I didn’t know that Nick Stiensberger, of Mitchell Energy, had already invented modern hydraulic fracking and there was about to be a boom for U.S. oil and gas.  His story and others are in The Frackers, by Gregory Zuckerman.  It is a timeless book about a very interesting time in the oil patch.  Fracking used to be very expensive because the fracking fluid contained a lot of gel.  Stiensberger found out that using a lot more water and a lot less costly gel was more effective and saved you hundreds of thousands per well.  You can see how fracking helped U.S. oil production exceed the 1970 peak below:

Energy is life and we got an extra decade of cheap energy that benefited our standard of living.  What was great for the consumer was awful for the oil and gas companies and they lost billions of dollars from 2014 until 2021.  After 2014 they were losing so much money that they had to reduce how many new wells they could drill.  The curtailment of discoveries and investment into new supply brings us to where we are today.  You can see in the chart below how capital expenditure or CAPEX has fallen off a cliff since 2014. 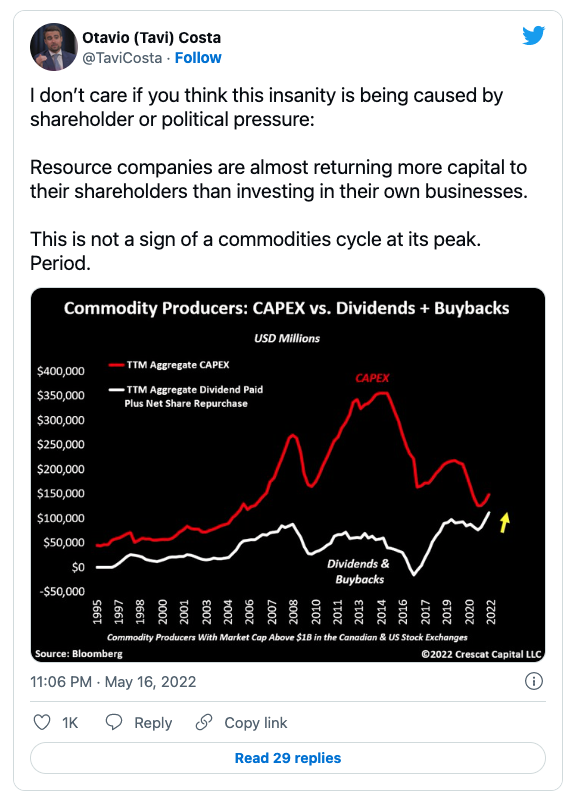 While supplies have been slowing, the demand from the emergent middle class has accelerated.  There are billions of people that want to live like you live and many are driving their first motorcycle and enjoying the convenience of their first refrigerator.  With demand exceeding supply, I think we are in for a prolonged crisis.  You would think with oil and gas at multi-year highs the nations in OPEC+ would be drilling like crazy to make more in profits.  We used to hear about an OPEC country cheating and producing more than their quota.  Now it appears that OPEC+ nations can’t even hit their targets! 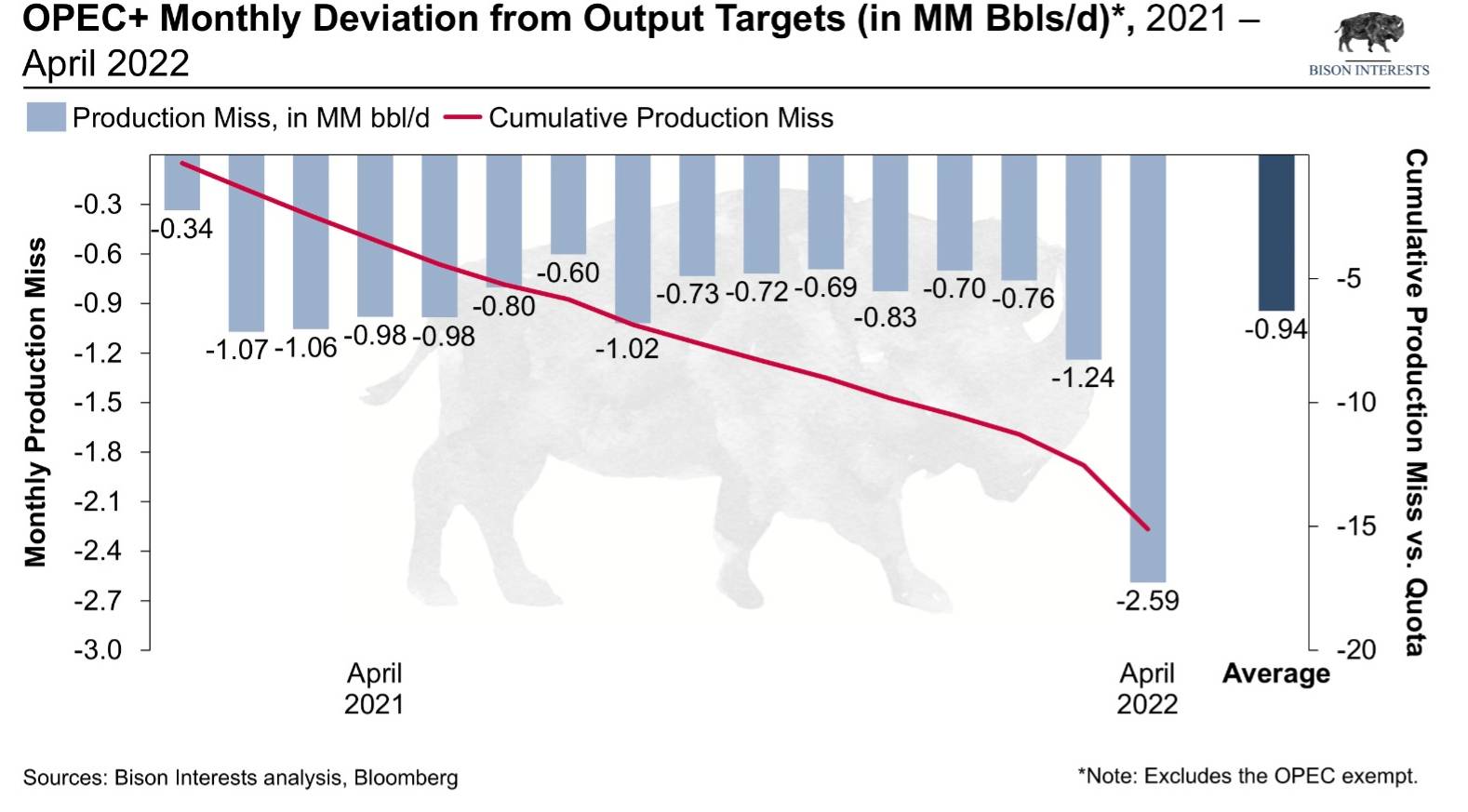 JOSH YOUNG AT BISON INTERESTS HAS CORRECTLY PREDICTED THAT OPEC+ CAN’T SEEM TO HIT THEIR TARGETS. 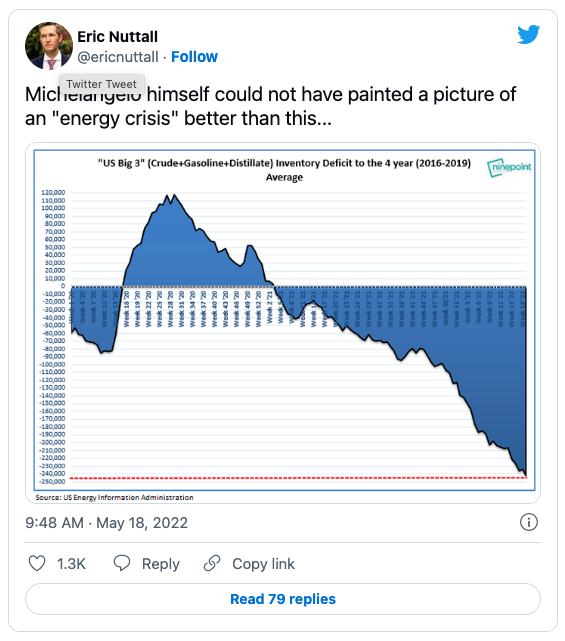 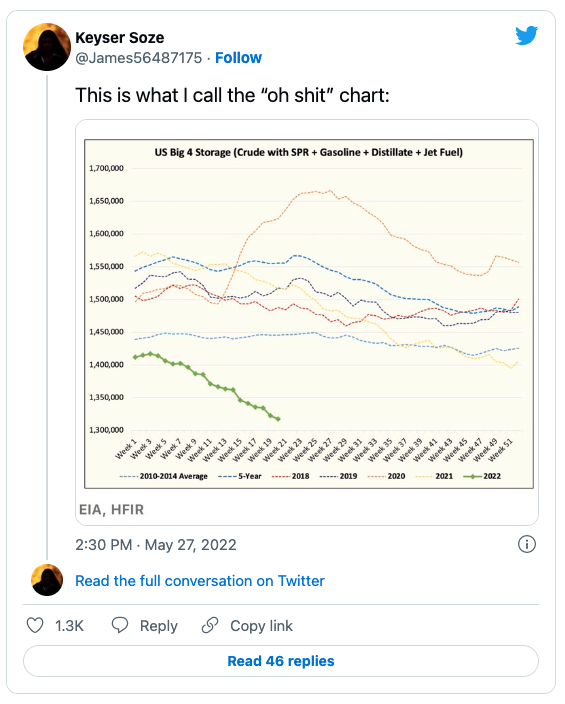 While the high prices of energy and food are just hurting the average American, they are devastating poorer countries.  Look at Sri Lanka. 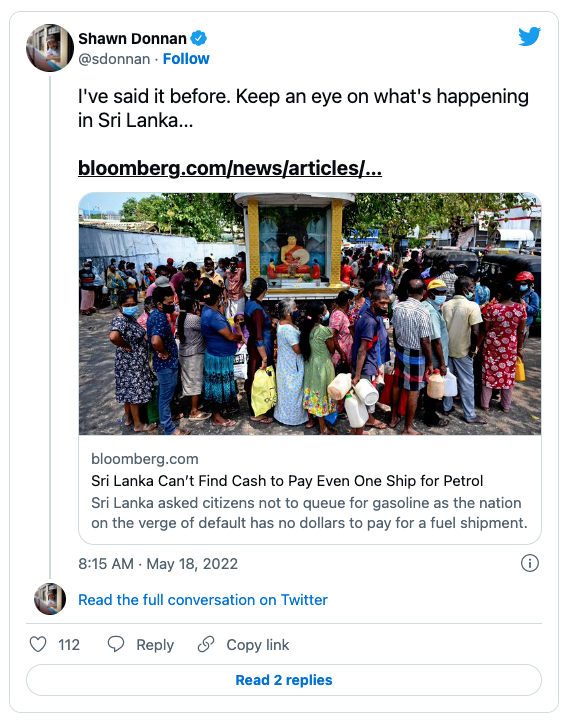 Sri Lanka is in real chaos. Hungry residents are literally preying on wealthy residents and officials, burning their homes and cars. The police open fire to kill. More than 200 people have already been killed. pic.twitter.com/SBdXTsXpnE — Wittgenstein (@backtolife_2022) May 16, 2022

Take Nigeria, the seventh most populous country in the world, and a major oil producer.  Recently domestic airlines threatened to shut down all domestic flights in the country as A1 Jet Fuel rose from N190 to N700 per liter!  Imagine if you couldn’t fly from Dallas to Atlanta or Chicago in the United States.  There are also protests in Iran over food inflation and shortages of some goods.  Peru has recently instituted a curfew to quell violent protests over the high price of fuel and fertilizer.  With the lack of investment in the oil patch and refining capacity reductions, I don’t see how the problems of the emerging market countries don’t make their way to the United States.  This article from 2012 issues a warning about the Eastern Coast of the United States losing 50% of their refining capacity over the coming years.  Well here we are with demand way up in the last decade and half the capacity!  The Washington Post reports:

“Last week, East coast inventories of diesel plunged to the lowest seasonal level since government records started more than 30 years ago. The shortage caused a crisis in the diesel market, sending wholesale and retail diesel prices to an all-time high. Diesel is today more expensive in America that it was in 2008, when the price of crude oil surged to nearly $150 a barrel compared with little more than $100 currently.”

My fear is that during peak driving season there are not just high prices, but actual shortages.  We all want to live in a carbon-free world where everything is run on renewable energy.  The problem is that we aren’t anywhere close to that becoming reality.  The reality today is that oil, gas, and coal are energy dense substances that help us to live in prosperity and and keep the lifestyles we have grown accustomed to.  If the East Coast runs out of diesel in some areas this Summer that means food rots in warehouses and can’t get to grocery stores.  Important medicines can’t get to the local drug stores and hospitals.  Combines can’t run to harvest crops.  It would be a crisis like I have never witnessed in my life.

I titled this piece The Energy Crisis of 2022 to 2028 as a guess as to how long it takes to bring on meaningful supplies of energy.  I sincerely hope I am missing something like I did in 2010 because today I do not see anything coming to save us in the next five years.  This article explains how the frackers are unlikely to boost supply.  After all, it is hard to hire someone to work at McDonald’s.  Even if they want to drill, they have to convince young men to leave their families and live in Armpit, Texas.  There is a major shortage of sand and drill pipe and other necessary materials.  We need to look at this crisis like the Manhattan project, but instead we have leaders that don’t understand energy.  In the U.S. they have cancelled offshore oil leases in the Gulf Coast and Alaska.  I do have to give Congress credit for setting aside $6 billion to extend the lives of existing nuclear reactors.  The U.K. just announced a 25% windfall profit tax on producers’ profits!  Would you want to risk your own money to find new oil and gas with this new tax?  Where is the Apple, Facebook, Google, and Pfizer excess profits tax?

Our politicians are leading us off a cliff.  It is extremely expensive and risky to find a major oil field.  The Bloomberg recently reported that:

“In the past three years, Shell has drilled three exploration wells without finding any commercial volumes, said Marcelo de Assis, the head of Latin American upstream research at consultant Wood Mackenzie Ltd. Shell and its partners paid just over $1 billion for the rights to explore the three blocks. The three wells Exxon Mobil has drilled in Brazil’s waters since late 2020 are also non-commercial, which cost $1.6 billion to access. “

That is a lot of money to lose not finding any profitable oil.  Instead of encouraging investment until we can come up with better and cleaner alternatives, we get this. 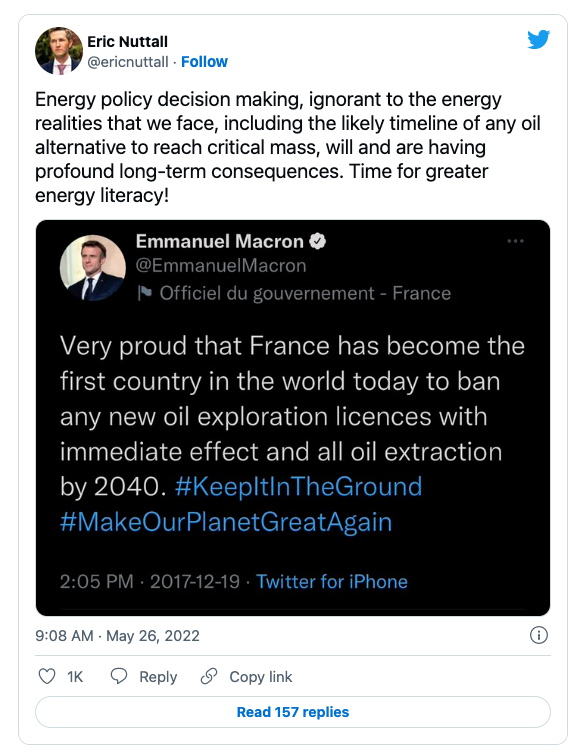 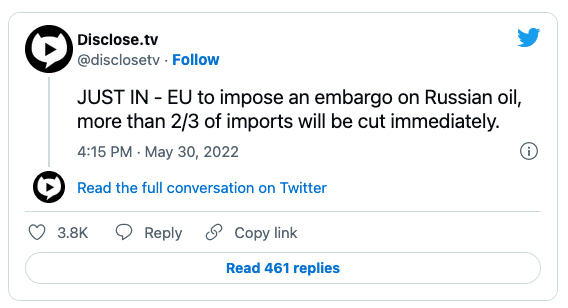 As I mentioned earlier, I hope I am wrong and there is no crisis.  I hope in a few years you can make fun of me for getting this so wrong and we can laugh about it.  I hate to be so negative, but I feel compelled to bring this up.  I see cracks forming that can’t be fixed easily or quickly.  I love a clean environment and support the laws we have to keep the earth clean.  I also love human life and I am worried that with the shortage of fuel and fertilizer that more people will die of starvation over the coming years than died with Covid (most deaths would occur in Africa and Asia).  Please take a look at the evidence I have presented and consider what $200+ oil and shortages of food and fuel would look like.  It isn’t hard to see that a lot of crops weren’t planted or fertilized with the Russian/Ukraine war.  I suggest storing as much food as you can–just in case.  Consider what expensive energy means for your commute, your home, and your company.  Would it make sense to purchase any products that are energy intensive like tires or fertilizer in advance of when you need them?  Should you lock in a long-term contract on your electricity (if your area allows shopping)?  What might the economy look like if people have to spend a larger and larger portion of their extra money on energy and food?  Energy is the master governor of our economies.  It is far more important than we realize.  Thank you for reading this.