Midterm Election Results Good News For Stocks, Based On History

What a week it was.

First, the midterm elections failed to produce the “red wave” that most pollsters and pundits predicted. As I write this, the Democrats have maintained control of the Senate while it’s still unclear which party will have control of the House.

And second, the crypto industry may have experienced its very own Lehman Brothers moment.

FTX, until recently the world’s second-largest crypto exchange, filed for bankruptcy as its embattled founder, Sam Bankman-Fried, stepped down as CEO following a liquidity crunch that exposed the firm’s improper use of customer assets. FTX’s shocking demise comes within months of the collapse of Terra’s Luna coin, which triggered the bankruptcies of crypto firms Celsius Network, Voyager Digital and Three Arrows Capital.

The question on many investors’ minds is: How far and for how long will the contagion spread?

It’s common knowledge that midterm results have not always been kind to the incumbent president. President Barack Obama’s agenda was famously sidelined by a Tea Party “shellacking” in 2010, and Republicans lost control of Congress midway through President Donald Trump’s term.

It’s also a given that past performance does not guarantee future results. As former Secretary of the Treasury Larry Summers tweeted last Wednesday, the last Democratic president to have such a favorable midterm outcome as Joe Biden did was John F. Kennedy, in 1962. 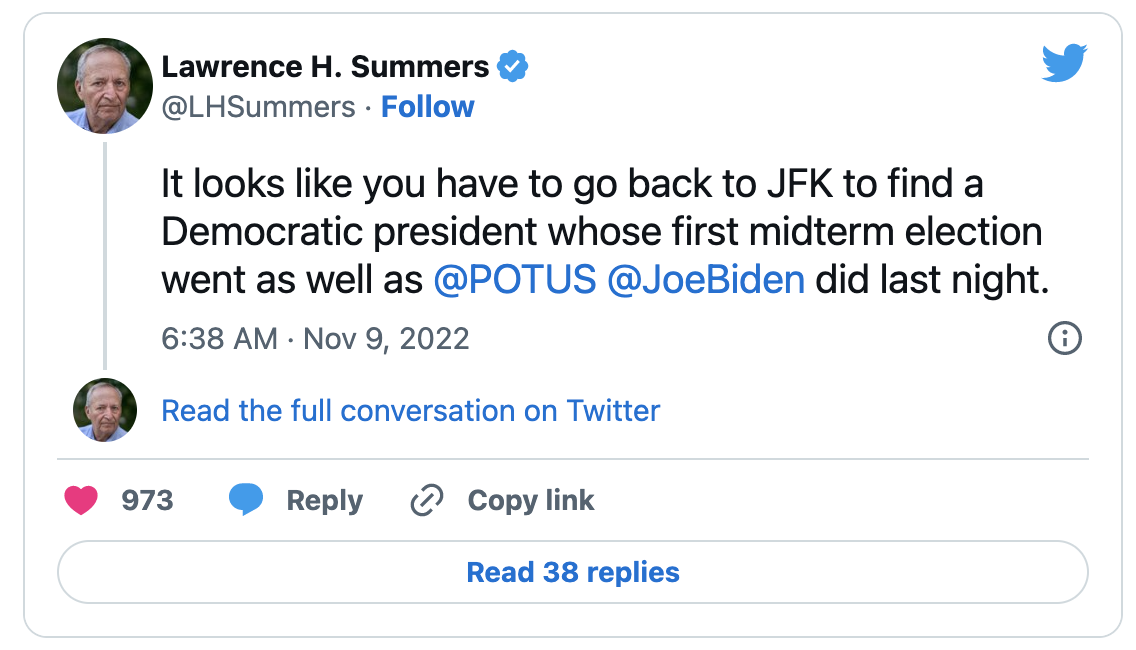 To be clear, the GOP may end up winning back a (very narrow) majority in the House once or both chambers of Congress once every vote is counted, but the victory, if we can call it that, is a Pyrrhic victory. In many contests across the U.S., voters rejected the most extreme forms of Trumpism, putting the former president’s 2024 ambitions into question.

The big winner of the election was Wall Street. As I’ve pointed out before, legislative gridlock has historically been constructive for stocks, since sweeping policy changes become unlikely and there’s less risk to individual sectors.

Newly-installed Twitter boss Elon Musk was criticized before the election for recommending that people vote for a Republican Congress, writing that “shared power curbs the worst excesses of both parties.” Like him or not, the billionaire entrepreneur is right. Since 1950, the S&P 500 has delivered the highest average returns when the White House was held by a Democrat and Congress by Republicans, according to LPL Research. Returns have also been higher-than-average when Congress was split, regardless of which party occupied the Oval Office.

If 2022 ended today, it would be the worst year for stocks since 2008. But looking ahead, conditions appear brighter, if history is any indication. The S&P 500 was positive 12 months after all 19 midterm elections between 1946 and 2018, with an average return of over 18%. Money Supply Growth Has Slowed To A Trickle

Of course, investors have other concerns besides politics—namely, inflation. Stocks rallied 5.5% last Thursday after the consumer price index (CPI) showed that annual inflation cooled for the fourth straight month in October, falling to 7.7%.

Although inflation remains stubbornly high, the lower reading gave the market hope that the Federal Reserve may take its foot off the brake a little. I happen not to think this will be the case—we still have a way to go before inflation returns to a “normal” 2%—but the trend is headed in the right direction.

Driving much of the inflation of the past two years has been runaway money-printing by global central banks in an effort to pump liquidity into a pandemic-impacted economy. The good news is that the rate of this money-printing has slowed dramatically to a trickle since the frenetic days of 2020 and 2021. At a 1.7% annual growth rate currently, M2 money supply is well below its 10-year average of around 5%. 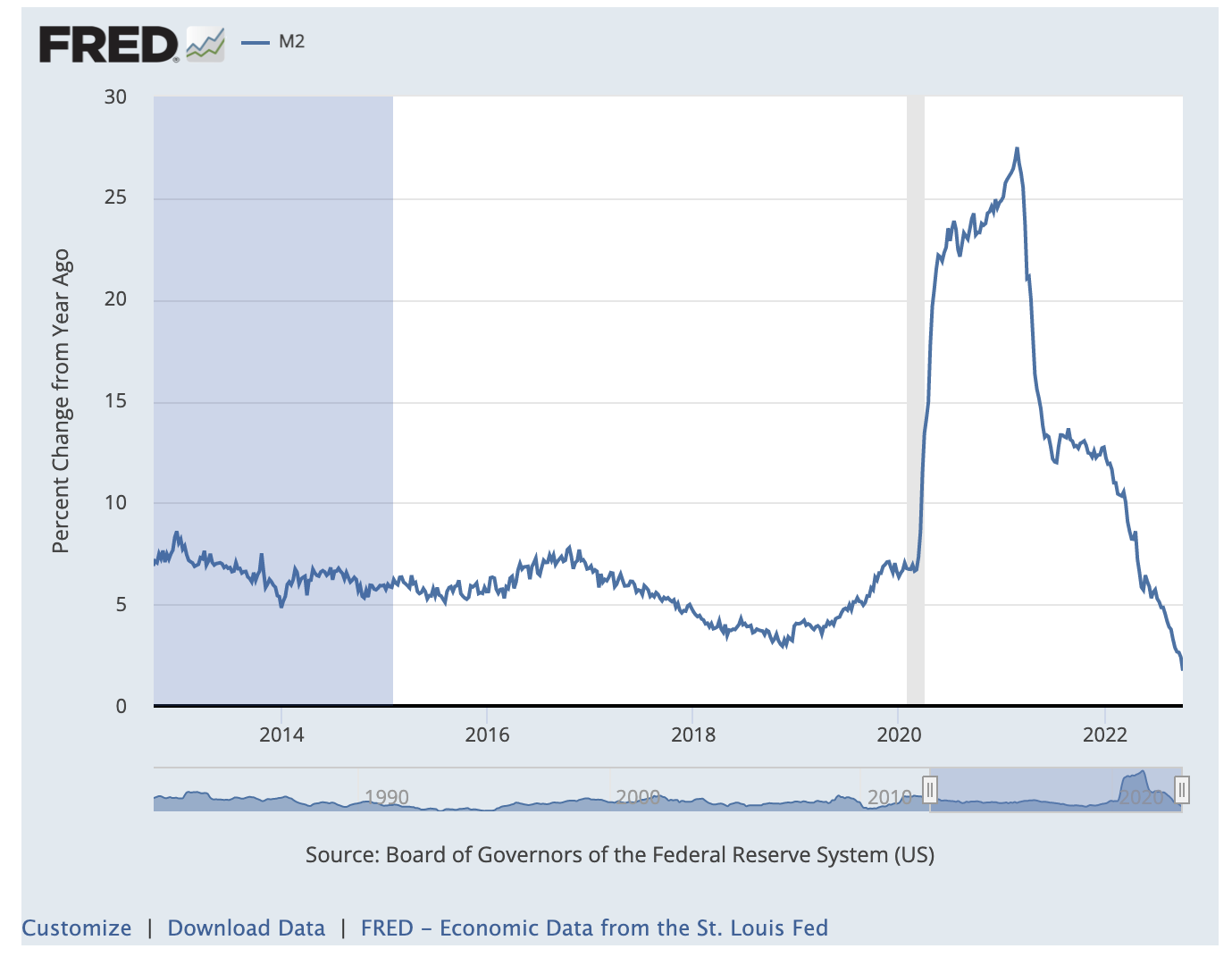 Returning to the issue of FTX, I think it’s important for people to understand that Sam Bankman-Fried, or SBF, was until recently seen as a smart, trustworthy wunderkind. Fortune magazine called him the “next Warren Buffett.” Last year, SBF said that FTX could one day buy Goldman Sachs and the Chicago Mercantile Exchange (CME).

But as it did with Theranos’ Elizabeth Holmes (who just last week asked to be sentenced with an 18-month at-home confinement), life has come at SBF fast. The 30-year-old entrepreneur’s net worth evaporated from an estimated $16 billion to less than $1 billion—all within an unprecedented 24-hour period.

FTX and SBF’s unethical decisions will inevitably contribute to many people’s lack of trust in Bitcoin and provide fuel to its biggest critics, Senator Elizabeth Warren chief among them. I believe that for crypto (and Bitcoin specifically) to gain widespread adoption, levelheaded lawmakers need to pass reasonable, rational guardrails protecting users and investors from bad actors in the still nascent crypto industry.

Related: Diversifying With Gold, Bitcoin And Other Decentralized Assets