It was the worst week in the market since March, with the S&P 500 sinking 5.6% and small caps faring even worse shedding 6.22%. Volatility surged with the VIX spiking 38% to match its highest level since June. The chart below shows the percentage changes in the S&P 500 and the VIX over the last six months. It is interesting to note that last week’s action was very similar to the dynamics around June 8 and comparable to the period around September 2. In both those previous cases the sell-offs approached 10% before bottoming out, which is approximately the damage suffered in the most recent downturn. 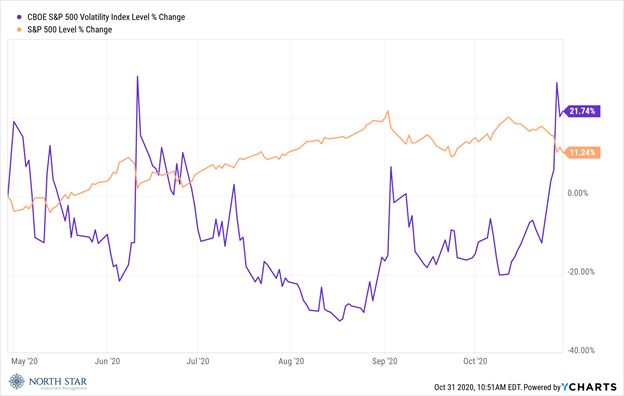 Looking back to the September sell-off we commented “This rally has been fueled by a combination of relatively inexperienced retail investors and highly sophisticated algorithmic-based trading firms, with both groups largely driven by price momentum rather than valuations. Anything that disrupts that momentum will create dramatic spikes of volatility.” In June we noted “The sell-off was blamed on Federal Reserve Chairman Jerome Powell’s somber forecast for the economy as well as a rise in COVID-19 cases in a number of states. Specifically, the Fed Chair called the poor state of small businesses “alarming”. In my opinion it was more likely just traders taking their profits after the rally got overextended.”

The Song remains the same, with the lack of a stimulus bill and the hotly contested election adding to the tension on Wall Street.  Speaking of the election, this morning we posted a podcast on the impact of the election on our website. Please click on this link to access that podcast.

The yield on the Ten-Year Treasury inched up 2 basis points to 0.86%, reaching its highest level since the early June volatility spike. Gold fell 1.3% while the dollar gained 0.9%. Crude oil was the biggest loser, shedding 10.2%.

Despite the crowd chanting “deal, deal, deal!” the politicians once again hit the “no deal” button.

Jobless claims fell to 751,000, while still elevated it is the lowest level since the pandemic started. Third- quarter GDP grew at an annual rate of 33.1%, rebounding dramatically for the historic downturn in the second quarter. Personal income grew at 0.9% and personal spending rose 1.4% in September. The University of Michigan Sentiment Index for October showed slightly higher optimism for future expectations coupled with a modest decline in current economic conditions.

It is really bad and will likely get worse over the next few months as winter is coming. Daily deaths have been around 1000 and new cases topped 100,000 on Thursday. The message seems clear from the experts that you can’t rush science, and that the earliest we can expect widespread distribution of a vaccine would be mid-2021. Please wear a mask and practice appropriate social distancing.

It will be another busy week of corporate earnings with 183 S&P 500 companies scheduled to report results for the third quarter.

On Friday the Bureau of Labor Statistics will report the jobs report for October which is expected to show a gain of 650,000 in nonfarm payrolls, and a decline in the unemployment rate to 7.7% from 7.9% the previous month.

Whereas COVID-19 will remain in focus, the big story for the week will be the election on Tuesday.

Stocks on the Move:

LRN -16.9%: K12 Inc. is an American online educational company. The company offers alternative programs to traditional on-campus schooling. K12 also operates state-funded virtual charter schools around the United States. The educational programs for K-12 students are usually monitored by parents and provide virtual classroom environments where teachers meet with students online, by phone, or in-person. This week, K12 released Q1 FY2021 results with EPS of $0.30 versus a loss of $0.25 Q1 FY2020. Revenues also rose to $371 million versus $257 million.  LRN is a 1.79% holding in the North Star Micro Cap Fund, a 1.47% holding in the North Star Opportunity Fund and LRN corporate bonds are a 1.54% holding in the North Star Bond Fund.

OESX -15.1%: Orion Energy Systems Inc. is a developer, manufacturer, and seller of lighting and energy management systems. Its activities are carried out through three segments. Orion U.S. Markets segment, Orion Engineered Systems segment, and Orion Distribution Services segment. There was no significant company news this week. OESX is a 4.74% holding in the North Star Micro Cap Fund and a 4.71% holding in the North Star Opportunity Fund.

RTX-13.1%: Raytheon Technologies is a diversified aerospace and defense industrial company formed from the merger of United Technologies and Raytheon, with roughly equal exposure as a supplier to the commercial aerospace manufactures and to the defense market as a prime and subprime contractor. This week, Raytheon said its Q3 net income slowed to $264 million from $1.15 billion.  RTX is a 1.37% holding in the North Star Opportunity Fund.

SII -11.2%: Sprott Inc. is an alternative asset manager operating in Canada. The company has six reportable segments such as Exchange Listed Products; Managed Equities; Lending; Brokerage; Corporate; and All Other Segments. Its largest segment in revenue is the Exchange Listed Products segment. This week, there was no significant company news. SII is a 1.06% holding in the North Star Dividend Fund.

SCS -13.4%:  Steelcase Inc. is a furniture company primarily based in the United States and has operations in Europe, the Middle East, and Africa. Steelcase markets its products primarily through a network of independent and company-owned dealers. The Americas segment offers architecture, furniture and technology products is marketed to corporate, government, healthcare, education, and retail customers. The EMEA segment provides furniture systems, storage, and seating solutions. There was no significant company news this week. SCS is a 1.55% holding in the North Star Dividend Fund.

TRN -10.8%: Trinity Industries Inc. sells and leases railroad products and railcar maintenance services in North America. The company operates under the name TrinityRail in three main segments: railcar leasing and management services, rail products, and all other. Customers include railroads, leasing companies, and shipping companies in the industries of agriculture, construction, consumer products, energy, and chemicals. There was no significant company news this week.  TRN is a 0.95% holding in the North Star Dividend Fund and TRN corporate bonds are a 3.59% holding in the North Star Bond Fund.

UTL -13.5%: Unitil Corp. is a holding company, through its subsidiaries it is engaged in local distribution of electricity and natural gas throughout its service territories in the states of New Hampshire, Massachusetts, and Maine. It reports three segments namely utility gas operations, utility electric operations and non-regulated. This week, Unitil announced earnings of $0.02 per share ad revenue of $87.4 million, missing most estimates significantly.  UTL is a 0.85% holding in the North Star Dividend Fund.

AMOT -13.2%: Allied Motion Technologies Inc. designs, manufactures and sells precision and specialty motion control components and systems. The firm primarily caters to the vehicle, medical, aerospace and defense and electronics and industrial, pumps and robotics sectors. The company has promoted and developed brands such as Agile systems, Computer optical products, Emoteq, Globe motors, Heldrive, Motor products etc. There was no significant company news this week, although earnings estimates ahead of an upcoming release are suggesting lower revenues.  AMOT is a 1.07% holding in the North Star Micro Cap Fund.

CNTY -12.6%: Century Casinos Inc. is a US-based international casino entertainment company. The company principally engages in the development and operations of gaming establishments as well as related lodging, restaurant, and entertainment facilities. Along with its land-based casinos, it also operates ship-based casinos on international and Alaskan waters. There was no significant company news this week.  CNTY is a 0.72% holding in the North Star Micro Cap Fund.

DENN -12.9%: Denny’s Corp. is one of America’s largest franchised full-service restaurant chains based on the number of restaurants. It provides Pancakes, Appetizers and soups, Sandwiches and salads, Breakfast Melts, Omelettes, and others. The company generates its revenue from the two sources: sale of food and beverages and the collection of royalties and fees from restaurants. This week, Denny’s came out with quarterly earnings of $0.01 per share demonstrating a continued pattern of underperformance for this year.  DENN is a 0.87% holding in the North Star Micro Cap Fund.

Related: The White House Wants Jam Before the Election