A raft of positive economic news was released last week, pointing to a robust ongoing recovery from the pandemic-triggered downturn and adding to the thesis that inflation is set to accelerate.

Leading manufacturing data from the Federal Reserve Banks of Philadelphia and New York were extremely constructive for business activity going forward. The Philadelphia Fed Index registered a 50.2 this month, which is the highest level in nearly 50 years if you can believe it. Close to three in four firms reported higher input prices for raw materials as well as higher prices for their own manufactured goods. Manufacturers in New York reported the same, with input prices rising at the fastest pace since 2008 and selling prices surging at a record-setting pace.

Indeed, the producer price index (PPI), issued monthly by the Bureau of Labor Statistics (BLS), shows prices rising at multiyear highs. The index for processed goods, for instance, moved up 4.0% in March, the biggest increase since August 1974. For the 12-month period, unprocessed goods exploded 41.6%, the strongest such growth since July 2008.

A number of commodities have been on a tear lately. Lumber futures are up for the 15th straight day. And just take a look at corn prices. Futures for the crop spiked above $6 a bushel for the first time since June 2013 on tight supply and strong demand from China and South Korea. Corn prices are now up 85% compared to the same time last year and could double before we see a retreat. 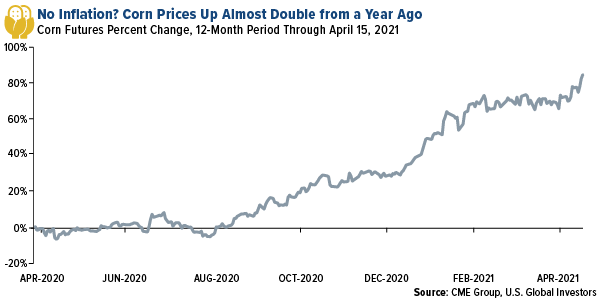 Copper continued its rally last week on a bullish report from Goldman Sachs, which sees the red metal climbing to an all-time high of $15,000 per metric ton by 2025 on an unprecedented supply-demand imbalance brought on by renewable energy. According to the analyst group, current copper prices of around $9,000 “are too low to prevent a near-term risk of inventory depletion.” Only a price point of around $15,000 is enough to incentivize the development of new copper projects. 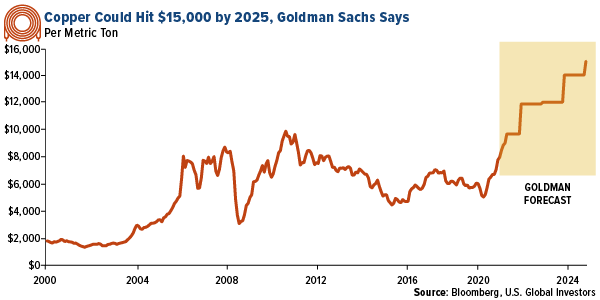 Our favorite copper play continues to be Ivanhoe Mines, led by billionaire Robert Friedland, who sees the lack of new mines as a national security issue. Speaking at the virtual CRU World Copper Conference last week, Robert told listeners that markets still haven’t quite recognized how disruptive the transition to renewable energy and electrification-of-everything will be, nor just how much copper will be required.

Ivanhoe Mines also announced it produced a record 400,000 metric tons of ore grading 5.36% copper at its Kakula and Kansoko mines in March.

In March, retail sales jumped a whopping 9.8% from the previous month, the second largest surge on record, as consumers made good use of their stimmy checks. As I shared with you recently, sales of cars and light trucks were up an unbelievable 58% in March compared to last year, with many luxury carmakers setting new monthly and quarterly sales records.

The French luxury giant LVMH Moet Hennessy Louis Vuitton announced last week that it had returned to growth following the pandemic, reporting first-quarter revenue of 14 billion euros, or $16.75 billion. Fashion and leather goods had an excellent start to the year, generating record revenue that was 52% higher than the same period in 2020 and an increase of 37% from 2019. The conglomerate was helped by its recent acquisition of U.S. jeweler Tiffany, bringing the number of companies it owns to over 75. 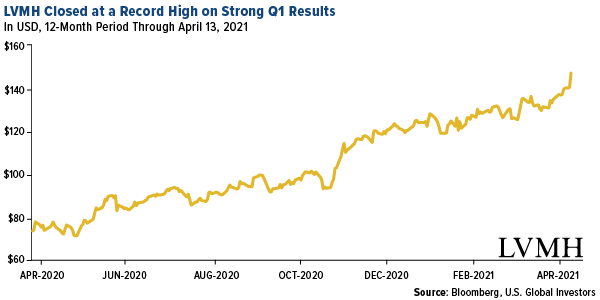 I’m very pleased with how LVMH has performed over the course of the pandemic, during which the fortunes of wealthy consumers have expanded. With a market cap of nearly 320 billion euro ($383 billion), LVHM is Europe’s most valuable company. First-quarter sales were driven by Asia, particularly China, and the U.S., which have done a much better job of combating COVID-19 than Europe. The increasing traffic at U.S. seaports is a clear sign that demand is strong right now. Following its record-setting February, the Port of Los Angeles processed 957,599 twenty-foot equivalent units (TEUs) in March, representing the busiest March in the port’s 114-year history. All combined, it was also the busiest first quarter ever for the seaport. To see the top 10 countries with the largest shipping fleets, click here.

On a final note, digital currencies stormed Wall Street in a big way last week. Crypto exchange Coinbase went public in a direct listing, opening the floodgates for a number of other crypto-related companies.

This move brings us one step closer to mass acceptance of cryptocurrencies.

Before now, investors seeking to participate had a few options other than to hold the underlying assets. The most obvious among these is to own shares of the crypto miners, including HIVE Blockchain Technologies, the only publicly traded firm to mine both Bitcoin and Ether using green energy. There are also futures contracts through CME Group, and a number of issuers have filed for a Bitcoin ETF.

The stock traded a staggering $29 billion in volume on its first day, which could be an all-time high, according to Bloomberg’s Eric Balchunas.

Several commentators pointed out that Coinbase ended lower than it opened at. As I told Cointelegraph last week, I’ve seen this story play out many times over my 30 years in managing money. Often when a company is up 300% in a year and goes public, it can easily sell off 30%. I don’t believe investors should be too worried about Coinbase’s volatility. I’m incredibly bullish. 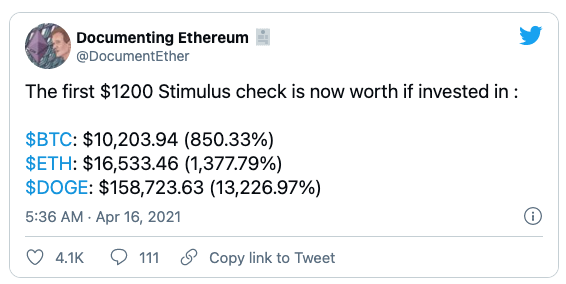 That’s not to say the industry isn’t volatile. It remains extremely volatile. A tweet by Documenting Ether on Friday, appearing above, shows just how much your investment would be today had you used the April 2020 stimulus check to buy Bitcoin, Ether or Dogecoin. It’s hard to look at these figures and not kick yourself.

Related: The Best Business Conditions of the 21st Century?