Over the next three months, the trailing 12- month CPI will move higher, suggesting that inflation is back.  Beginning with the March CPI, we see the dropping off of the March 2020 negative CPI (-0.32%) from being included in the trailing 1-year CPI as the new month (positive CPI) is added. This process will continue for the next two months until all three negative CPI months are removed from the annual trailing calculation. 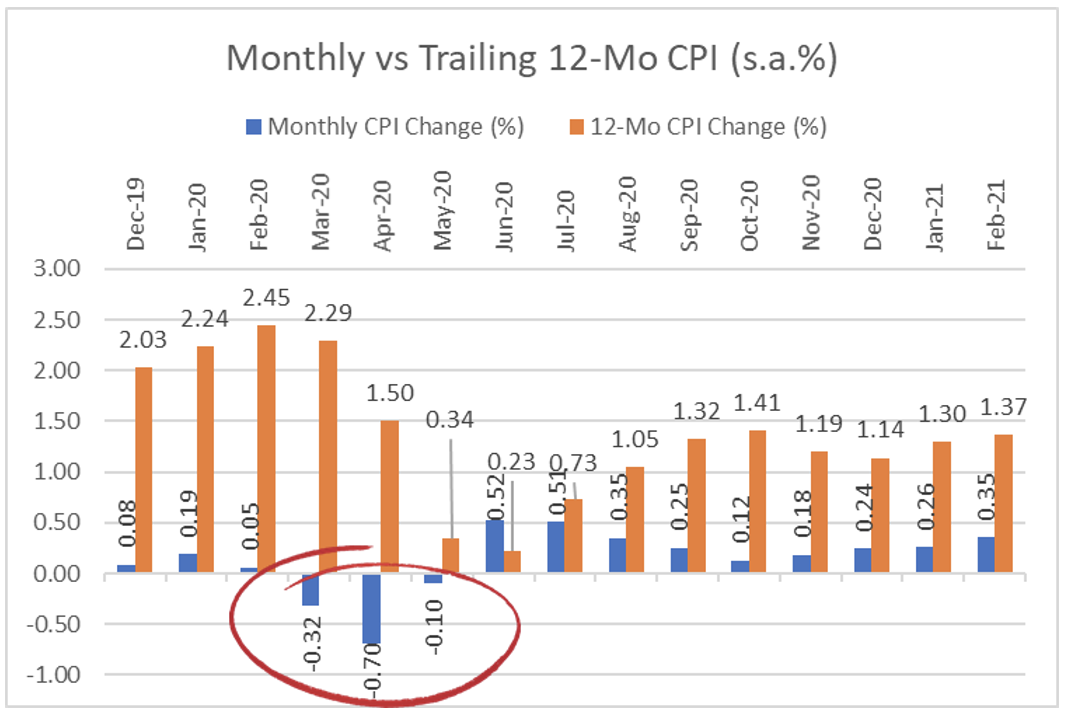 This is often referred to as the “base effect. We watch out for the monthly change rate to see if inflation is moving up in a higher to much higher rate going forward.  The Bureau of Labor Statistics announced on April 13 that the CPI increased 0.6% in March on a seasonally adjusted basis after rising 0.35% in February. The March 1-month increase was the largest rise since a 0.6% increase in August 2012. Over the last 12 months, the all items index increased 2.6% before seasonal adjustment.  The core CPI (all items less food and energy) rose 0.3% in March. 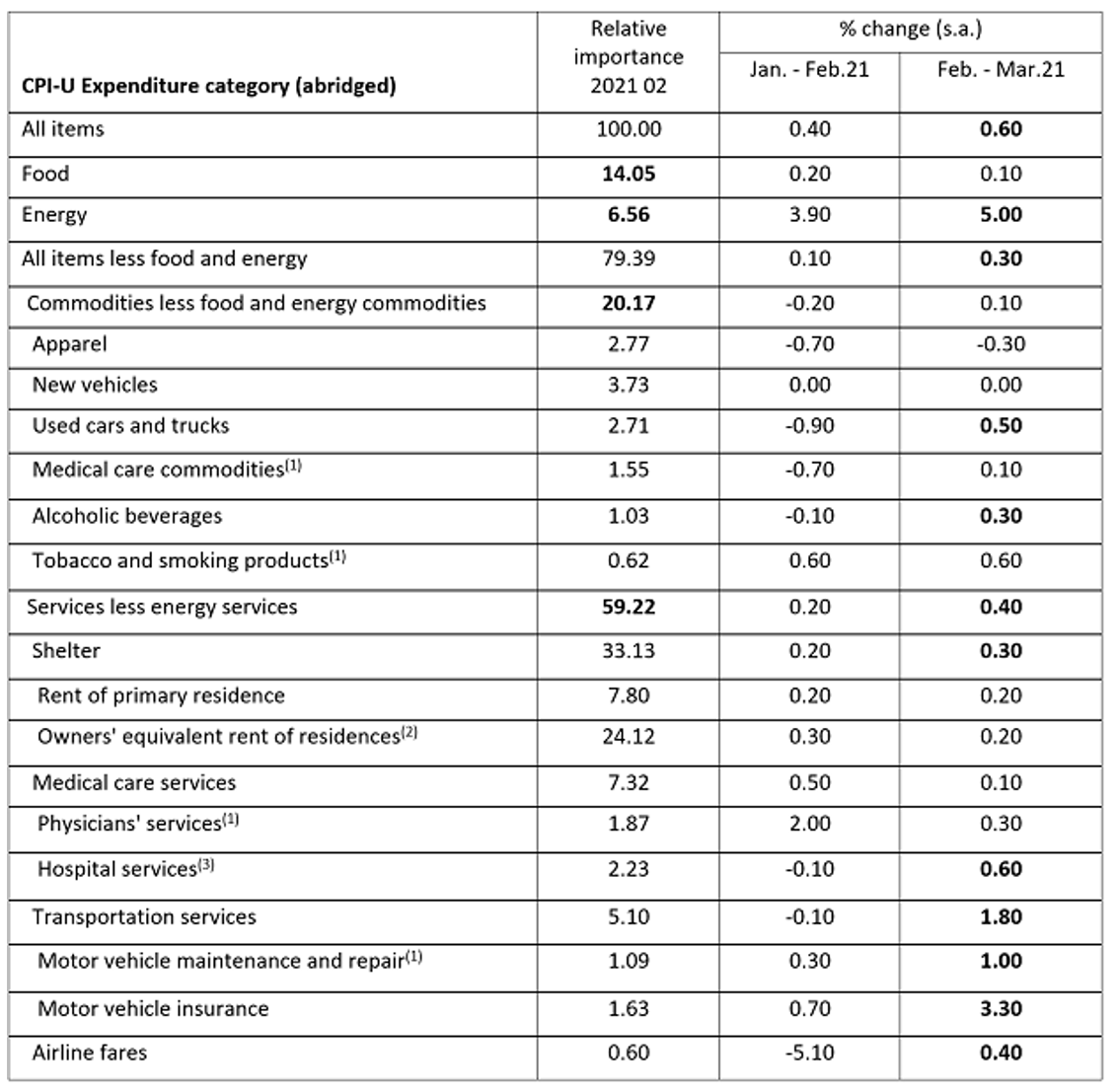 As stated earlier, we expect, at least for the next two months, for CPI to continue adjusting to the upside and getting to 3% resulting from the base effect and reflecting the increasing economic activities as more states relax restrictions and open their economies.  It is important to note that CPI does not take into consideration the rise in financial assets or housing prices which are direct beneficiaries to the monetary and fiscal support.

These monthly CPI and core CPI readings are backward looking.  In addition to the base effect, some of the March and the current quarter inflation rise can also be attributable to the following factors:

5. Pent up consumer demand after over a year of being locked up in their homes cannot be overstated.  According to a March 18-21 survey among 2200 U.S. adults by Morning Consult[5], respondents were asked to consider when the pandemic is under control and the economy has fully reopened, how excited they are about the opportunity to do the following:

With these 5 and other contributing factors, it is questionable if the surge in activities will be sufficient to bring inflation back above 2% (say 2.5% to 3%) on a sustainable long-term basis.  Over the next year or two, the supply chain will be normalized.  Even if companies will sacrifice efficiency (dependent on a single supply and value chain) for resilience (multiple supply and value chains) or reshore certain manufacturing capabilities to minimize foreign dependency, it is questionable if corporations will pass on the additional costs to consumers.  Unless there are significant long-term (multi-year) meaningful injections of fiscal stimulus, such as infrastructure projects that boost higher paying jobs nationally, or a significant shortage of commodities (as in the case of the 70’s style oil embargo), it is difficult to make a case for inflation to be significantly above trend in the longer run. As a base case, it is reasonable to consider the short-term jump in inflation is transitory.

The consumer and economist surveys and market expectation data are also aligned with the transitory view for inflation. 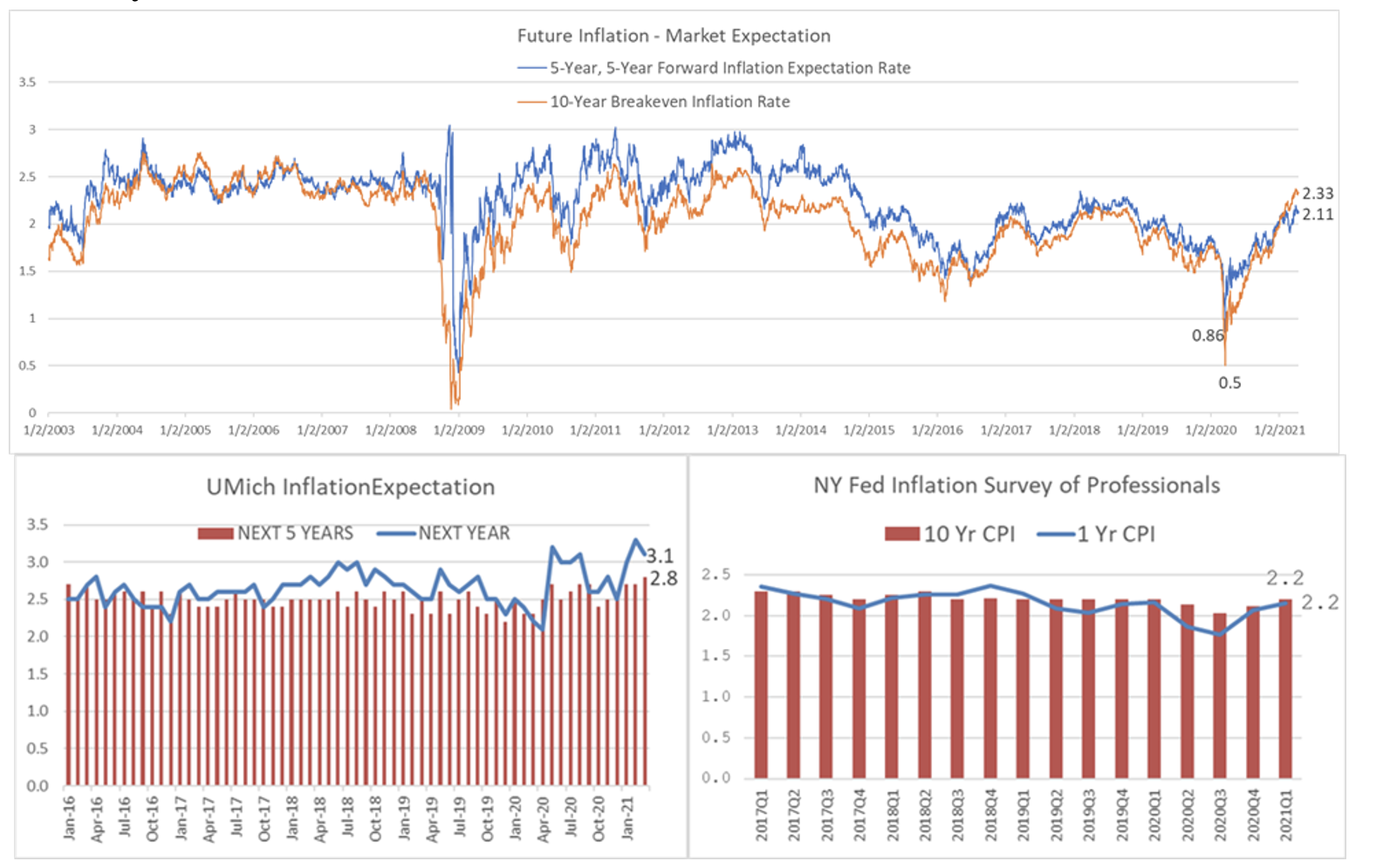 For example, 5-years from now the expectation for inflation 5-years thereafter is at 2.11%.  On the other hand, the 10-year Breakeven Inflation Rate (i.e. the amount of compensation for a 10-year bond holder to be compensated for the expected inflation) is 2.33%.  The consumer survey data from University of Michigan suggests that the inflation rate is 3.1% next year and 2.8% in 5-years.  This is consistent with the transitory nature of inflation as expressed by the Fed.  Finally, professional economists surveyed by the New Year Fed[6] at the end of the first quarter expect inflation next year to be at 2.2% and remain at 2.2% 10 years from now.  The dispersion among consumers, professionals and the market expectations of 1-, 5- and 10-years remain pretty small.

We are joyfully anticipating and participating in the post-pandemic robust economic recovery and at the same time sensing the beginning of a gradually less supportive environment for stocks and bonds as the market participants test the resolve of the Fed on its patience and its reaction functions to reflation.  Can the Fed really play God and calibrate a 2% inflation while getting back to a 3.5 unemployment and a 2.5% plus GDP economy in the longer term?