As some of you know already, I was in Miami this past weekend attending Bitcoin 2021. I’ll share my takeaways in a Frank Talk later this week, but for now, I’ll say that the conference was a huge success, attracting a record 12,000 attendees. Whereas the conference in 2017 largely focused on Bitcoin’s price, this year’s focused on Bitcoin’s value—which are two very different things.

Today I’d like to update you on the ongoing recovery in the airlines industry.

Traveling to Miami marked only the third time I’ve flown commercial in about a year and a half, a huge departure from my globetrotting before the pandemic. Like my other two experiences, the flight was pleasant and comfortable, and I felt at ease that airports were taking every precaution to ensure travelers’ safety.

I should add, though, that there were comparatively many more people catching flights this time around. On Sunday, June 6, air traffic in the U.S. hit a fresh pandemic high of 1.98 million people, or 75% of capacity on the same day in 2019. That’s up from 38% at the beginning of the year, so the trend is decidedly moving in the right direction.

This improvement is due in large part to the growing number of Americans who have been vaccinated against COVID-19. As of June 1, over half of all U.S. adults were either fully or partially vaccinated, putting the U.S. well ahead of other developed and emerging countries. 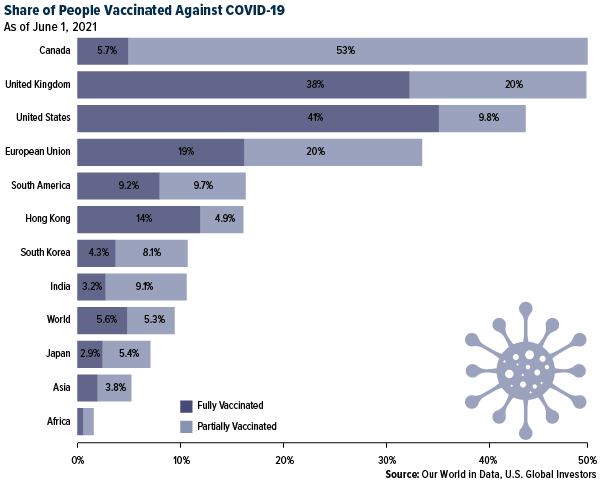 Last week, in fact, new coronavirus cases hit their lowest point in the U.S. since the pandemic began in March 2020. Axios reports that cases are now so low, and the virus so well contained, that it will stop providing weekly updates on new infections for the first time in 56 weeks.

This is hugely constructive for the domestic travel industry in general and airlines in particular, and I’m optimistic that a full recovery will come much faster than initially anticipated.

Europe Is the Next Leg in the Travel Recovery Story

I expect the next major recovery story to be Europe, which is still lagging behind the U.S. in terms of vaccination rates but accelerating. On June 1, a new digital COVID passport went live in seven European Union (EU) member countries, allowing travelers to move more freely throughout the bloc.

Bulgaria, the Czech Republic, Denmark, Germany, Greece, Croatia and Poland all jumped ahead of the line in making the so-called “green certificate” available. The remaining 20 EU members are scheduled to go live by July 1.

The certificate works by recording whether a traveler has been vaccinated against COVID-19, recovered from the virus or tested negative within the past 72 hours. Those who meet at least one of those three criteria are free to travel across borders.

Last week, Eurocontrol, a trade organization that supports European aviation, released updated air travel forecasts for the remainder of 2021, and the scenarios are encouraging.

In May, air traffic in Europe was only 39% of what it was in the same month in 2019. That doesn’t sound great, but if vaccine rollout continues at a rapid clip this year, traffic by December 2021 could be close to 80% of the baseline 2019 numbers, according to Scenario 1. (By comparison, traffic in the U.S. is currently at 67%.) Scenario 2 predicts 70% capacity by December if vaccinations are stretched out to the first quarter of 2022. Call me overly optimistic, but I don’t see Scenario 3 happening, which envisions “persistent restrictions,” “patchy vaccine uptakes” and “renewed outbreaks.”

90 New Airlines to Launch this Year

You may say I have an optimism bias, but business leaders in commercial aviation seem to agree with me. More than 90 new airlines are set to launch in 2021, in North America, South America, Europe, Asia and Africa. Here in the U.S., two have already taken their inaugural flights: Avelo Airlines on April 28, from Burbank to Santa Rosa, California; and Breeze Airways on May 27, from Tampa, Florida, to Charleston, South Carolina. Breeze is the fifth airline founded by serial entrepreneur David Neeleman, who also founded Morris Air (purchased by Southwest in 1993), WestJet, JetBlue and Azul Brazilian Airlines.

This tells me there’s massive pent-up demand by consumers and investors alike that airlines are scrambling to capitalize on. I believe it’s not only a great time to fly but also to invest.