The Berlin Wall came down 32 years ago this November, ushering in a new era of freedom and opportunity. But judging from the results of a recent local election, it looks as if socialism is trying to stage something of a comeback in Germany’s capital city.

In a referendum that coincided with Sunday’s general elections in Germany, a majority of Berliners approved a measure to have apartments forcibly seized from landlords. The move would socialize nearly a quarter of a million flats, costing the city between $34 billion and $46 billion.

Supporters of the referendum believe this will help control rent hikes, but they’re forgetting a couple of things. One, living costs are rising not necessarily because of greedy property owners, but because construction of new housing has not kept pace with surging demand. Kicking out the landlords does nothing to address this persistent problem.

And two, inflation is hitting all sectors right now, not just rental property. Germany’s annual rate of inflation hit a 13-year high in August (one of the reasons many of its citizens have been loading up on gold). So why stop at apartments? Why not socialize food? Clothes? Automobiles?

Pretty soon, Berliners could find themselves back behind the Iron Curtain.

Around the world, socialist-minded lawmakers and politicians celebrated the referendum’s passage. In a tweet, Canadian Member of Parliament (MP) Don Davies called the measure “a creative and bold way to deliver affordable housing.” 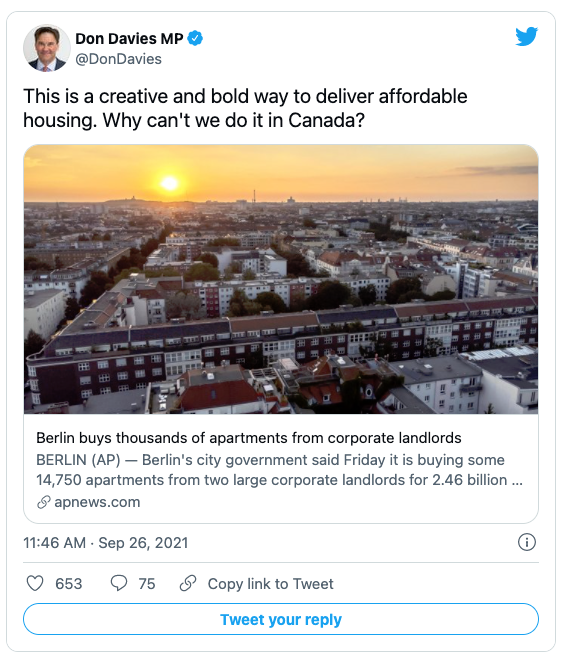 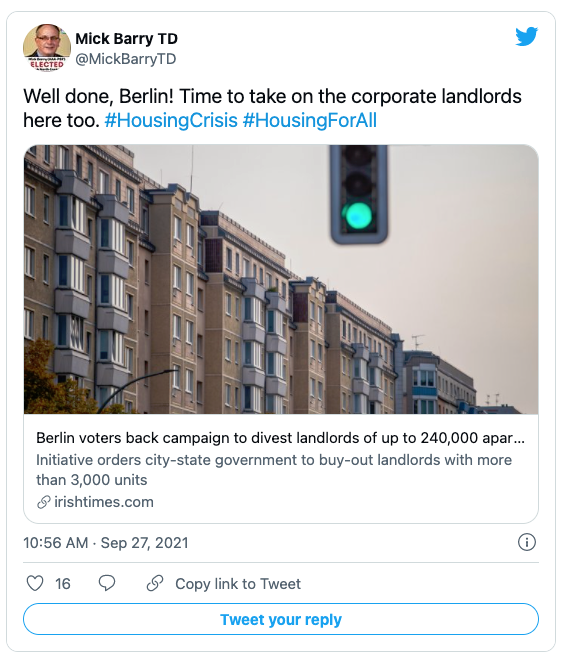 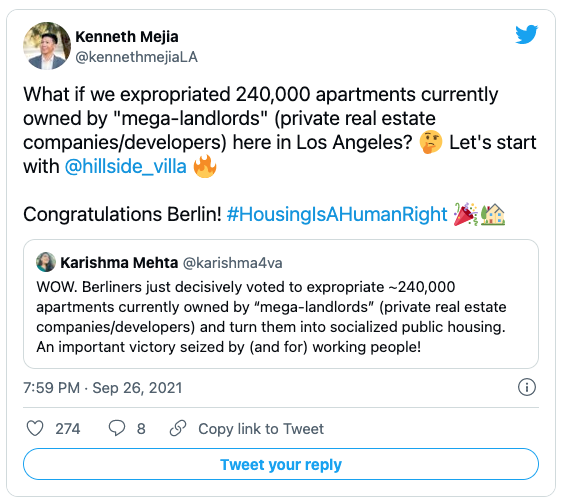 I’ll admit, ours would be a perfect world indeed if everyone had a comfortable place to live rent-free. But as Margaret Thatcher said, “The trouble with socialism is that eventually you run out of other people’s money.”

It isn’t just Berlin. Germany as a whole is set to shift left after the country’s Social Democratic Party (SPD) narrowly won the biggest share of votes on Sunday, with finance minister and former Hamburg mayor Olaf Scholz expected to succeed Angela Merkel as chancellor.

I predict Merkel will be remembered fondly, in Germany and elsehwhere, for many decades to come. After 16 years as chancellor, she’s leaving office with a higher approval rating than any other world leader. Like Margaret Thatcher, she reined in government spending, kept bureaucracy in check and oversaw a period of strong economic growth. A former research scientist, Merkel deftly navigated Germany through a number of crises, including the 2007-2008 recession, helping to crystallize her country’s role as not just Europe’s largest economy but also its de facto leader. On her watch, Germany’s GDP per capita growth topped that of all other G7 countries.

But the time has come to look beyond Merkel, and if I’m being honest, Berlin’s socialist referendum makes me slightly uneasy.

I know nothing about Olaf Scholz, the presumed chancellor-in-waiting, other than he’s a member of the SPD, a party that has its roots in Marxism. Among his campaign pledges are to increase housing—which I believe will do more to quell rent hikes than socializing rental property ever could—expand renewable energy and raise the minimum wage.

Can We Reverse Course?

Germany’s flirtation with socialism is part of a troubling trend that’s hitting the world’s biggest economies, from Justin Trudeau in Canada to Alexandria “Tax the Rich” Ocasio-Cortez in the U.S.

Although the People’s Republic of China has always been socialist, President Xi Jinping has lately taken aim at Western-style capitalism in a bid to revive Chairman Mao’s Marxist vision. According to reporting by the Wall Street Journal, Xi seeks to build a China “in which the party does more to steer flows of money, sets tighter parameters for entrepreneurs and investors… and exercises even more control over the economy than now.”