The economy may be on shaky ground, but you wouldn’t know it by looking at U.S. consumer spending habits alone.

Retail sales rose a healthy 1.3% in October from September, according to Census Bureau data. Some economists put the increase into context by pointing out that Amazon held a Prime Early Access sales event in October, while California distributed over $5 billion in inflation relief checks. Higher prices for everything, including new vehicles and fuel, also contributed to the retail sales jump.

Despite stubbornly high inflation and recessionary fears, spending by consumers may not slow down as we approach the busy holiday shopping season.

In its annual forecast of holiday spending, the National Retail Federation (NRF) says it believes sales will increase between 6% and 8% from last year, potentially making this season the third best year in the past 20 years following 2020 and 2021, when American consumers were stuck at home and flush with pandemic stimulus money. Holiday sales could top $960.4 billion as “consumers remain resilient and continue to engage in commerce,” NRF President and CEO Matthew Shay says. 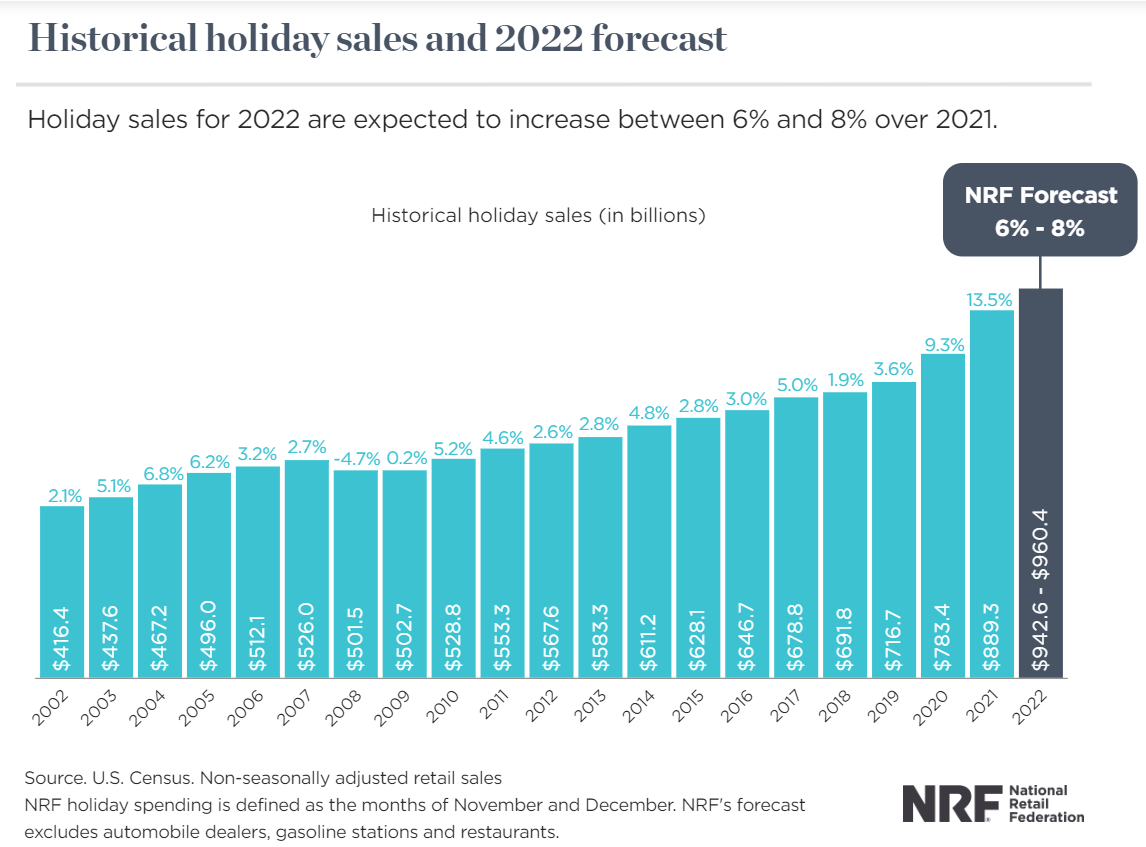 The big exception appears to be Target. Last week, the Minneapolis-based retailer warned shareholders of lackluster spending this holiday season due to higher prices. Although sales were slightly higher in the third quarter compared to the same quarter last year, due mostly to higher consumer prices, operating income decreased nearly 50% on a rise in expenses.

Target aside, I believe the holiday forecast is incredibly constructive for retailers. That includes luxury retailers, many of which reported strong results for the third quarter. Industry leader LVMH reported a 19% jump in sales from the same quarter last year, while Kering (parent company of Gucci) and Hermes reported increases of 14% and 24%, respectively.

Last week, Bain & Company announced that the global luxury market is on track to grow 21% this year, reaching $1.4 trillion. The firm projects that personal luxury sales will increase a further 3% to 8% next year, even as the global economy is expected to contract.

Unlike what happened during the 2008-2009 financial crisis, when consumers cut back on luxury items, today’s luxury market appears poised to expand with a larger global consumer base and greater concentration among high-earning buyers, Bain says.

There could be two things in particular supporting strong retail sales: excess savings and a reliance on credit cards.

In a report issued last month, the Federal Reserve stated that U.S. households are still holding onto a sizeable chunk of their pandemic savings. At the peak, Americans were saving as much as 33% of their disposable income.

The rate has since fallen to just over 3%, but Americans still have access to a massive $1.7 trillion. That represents about 75% of the total cash that households collected and saved during the pandemic. Reserves are steadily being depleted, but there’s still plenty left in the tank to support consumption in the near- to medium-term.

And how are Americans choosing to make transactions? Credit cards, apparently.

With interest rates on the rise, this could be a problem to keep an eye on. The average annual percentage rate (APR) for retail cards just hit a fresh new high of 26.72%, with some exceeding an unbelievable 30%, according to CreditCards.com. Retail credit cards differ from general purpose cards in that they’re issued by or on behalf of a store. Among the highest APRs belonged to cards issued by Kroger, Macy’s, Exxon Mobil, Speedway and Wayfair.

While I’m on this topic, total U.S. household debt grew to a new record high of $16.51 trillion in the third quarter, according to a separate report by the New York Fed. This amounts to an increase of $351 billion from the previous quarter, a sign of strong consumer demand and rising prices.

Mortgages remained the number one category, representing close to three quarters of total debt. However, the bank points out that the number of new home mortgages slowed to a pre-pandemic low during the quarter as 30-year mortgage rates have climbed above 6%, the highest since 2002.