In the past, we have written about trends in small businesses based on the National Federation of Independent Business (NFIB) Survey of Small Business Economic Trends. We follow these trends because small business owners and small companies in the U.S. create about two-thirds of net new jobs, drive innovation and account for 44% of U.S. economic activity. This survey also serves as a counterbalance to the large company bias of the Purchasing Managers Index. With a 48-year history of tracking insight from more than 325,000 small business owners the survey provides valuable data related to Small Business Optimism, Labor Markets, Capital Spending, Inventories, Credit Markets and Inflation. 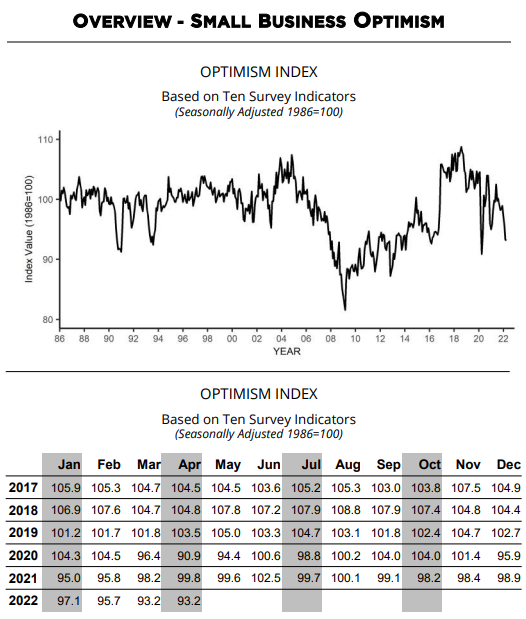 The NFIB optimism results were disappointing as the concerns over the coming quarters include reaching peak inflation, difficulty in getting people back to work and the possibility of a recession. Estimates of the likelihood of a recession are increasing and owners are becoming increasingly pessimistic about future business conditions.

The April NFIB Optimism Index was unchanged at 93.2 which remains below the 48-year average of 98 for the fourth straight month as inflation remains at 40-year highs. The index has declined each month of the year, but this comes as no surprise as small business owners expecting better business conditions over the next six months sits at the lowest level on record. 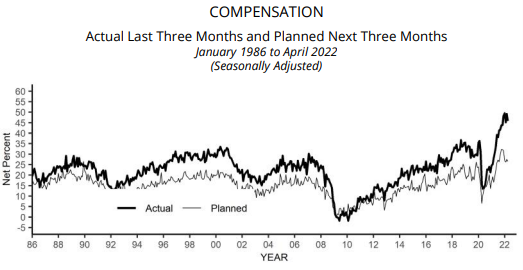 The widespread shortages of labor are creating an increase in labor compensation as 46% of owners report they have increased wages. For employers, this means higher salaries to retain employees and lower revenue. It also leads to sign-on bonuses and additional incentives to attract applicants. Rapid wage growth has already taken hold. April 2022’s average hourly wage was up by 5.5% from April 2021, but this is not keeping up with inflation.

The most recent JOLTS (Job Openings and Labor Turnover Survey) report revealed a record 11.5 million jobs remain open and small business owners continue to struggle to fill open positions. 23% of owners reported labor quality as their top business problem. To attract employees, 27% of the respondents plan to raise compensation over the next three months, 47% reported job openings they could not fill and of the owners hiring or trying to hire, and 93% reported few or no qualified applicants. 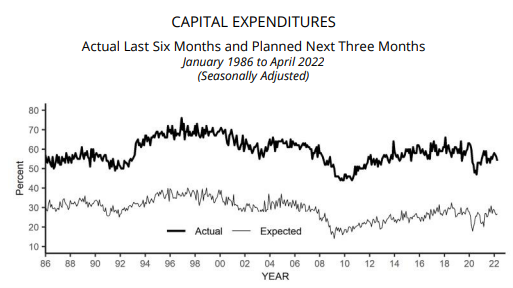 Weakening consumer sentiment due to the slowing economy and spike in inflation has small business owners taking a pessimistic view and reducing investment spending. Sentiment dropped in May, as evidenced by the University of Michigan Consumer Sentiment Index, to 59.1 from 65.2. The lowest since 2011. The gauge of current conditions dropped to 63.6, the lowest in 13 years, while the measure of future expectations declined 6.2 points. Consumers expect prices to rise 5.4% over the next 12-months, holding at a decade high for the third straight month.

This is reflected in the survey as capital spending remains historically weak with 54% of owners reporting capital outlays in the last six months. In the next few months only 27% plan to spend, this is also a historically weak number. Owners need a more positive view of the future of the economy to help stimulate investment spending. 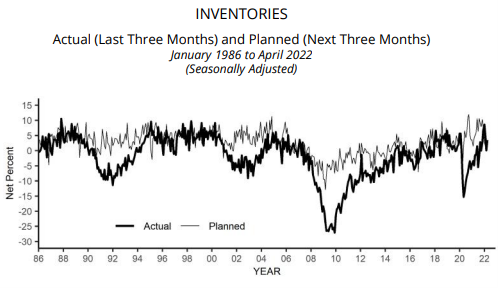 The survey revealed that 19% of owners reported gains in inventories while 15% reported declines, but this is a slim margin and further illustrates the lack of confidence in the economy as well as the impact of supply chain disruptions. Shortages of materials have reduced business activity; 36% of small business owners report supply chain disruptions have significantly impacted their business and another 34% report a moderate impact. 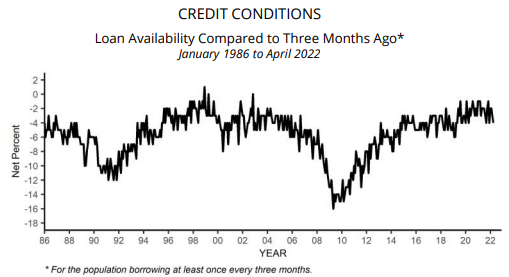 While 61% of the respondents said they had no needs for a loan, 26% reported their credit needs were met, and only 1% reported loans were a top business problem. Although the average rate paid on short maturity loans is up, favorable credit conditions exist. Corporate credit fundamentals are in generally good shape and small businesses still have access to credit, but the outlook for many owners has them hesitant to take additional loans. 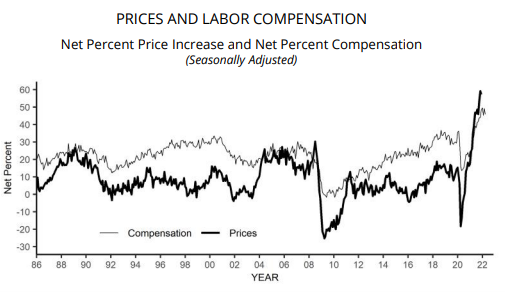 The NFIB survey results can be considered a leading indicator as the signs of inflation began in the summer of 2021 when the NFIB survey found an increasing number of small business owners reported “inflation” as their most important challenge. The survey also reported escalating numbers of small business owners raising prices and planning to raise prices. In the latest survey, 62% reported inflation as having a substantial impact on their business while 68% plan on raising selling prices in the next three months, while 32% of respondents list inflation as their single most important problem.

Inflation is a significant challenge for small business owners but has not been a prominent issue for them over the past 40 years. This requires small employers to adjust operations and adjust tactics to absorb input cost increases.

Small businesses employ over 60 million people which translates into 47% of the total U.S. workforce and 44% of economic activity. Small businesses create nearly 1.5 million jobs annually and account for 64% of new jobs in the U.S. The chart below highlights the challenges of small businesses to hire workers as the number of openings now exceeds the number of unemployed individuals.

The recent trends in NFIB data are not surprising when considering the headwinds faced during the pandemic and the many challenges that remain. The biggest concerns for small business owners appear to be inflation and labor. Small firms find it more difficult to manage inflation pressures and the simplest solution is to pass on higher costs to customers. If inflation subsides slowly, consumers are likely to reduce spending and small businesses will remain under pressure. This highlights the concern from small business owners of a weakening consumer. The first read on first quarter (Q1) GDP was -1.4% and the Atlanta Fed GDPNow real GDP estimate for Q2 is 2.4%. This slowing trend suggests businesses will remain cautious for the remainder of the year as volatility in equity and fixed income markets will likely remain high through the midterm elections.

Related: How To Adjust Your Portfolio as the Fed Raises Rates