Is the 2021 Economic Recovery Overhyped?

Many analysts and economists ask themselves if the market is correctly pricing in a 2021 economic recovery or if waiting until 2022, or even 2023, is more realistic. Much optimism follows the rollout of several vaccination programs aimed at curbing the global spread of Covid and getting the world's economy firing on all cylinders again. But reports this week that at least one of the vaccines, the Oxford-AstraZeneca variant, may cause blood clots led 12 European countries to suspend their vaccination programs temporarily. If more suspensions follow in other countries, economists may need to revise their current global economic growth expectations.

The Barron's cover story this week takes a look at the effect of the Covid crisis on the US economy one year after it all started. The article concludes that the US economy could recapture its recessionary losses two quarters sooner than during the 2008 financial crisis. Despite a more considerable overall decline in US Gross Domestic Product (GDP), a faster recovery could come thanks in large part to the combination of trillions of dollars of fiscal stimulus, ultralow interest rates, and an effective vaccination program.

But the market's concern is growing that the era of ultralow interest rates is ending. For example, the yield on the benchmark 10-Year Treasury note rose to 1.63% on Friday, a fresh high since February of 2020, amid prospects of a strong US economic recovery and renewed inflation concerns. At the same time, the University of Michigan's US consumer sentiment jumped to 83 in March from 76.8 in February, beating market forecasts of 78.5. The figure is the highest reading since March 2020, when Covid had not yet materially reached the US. 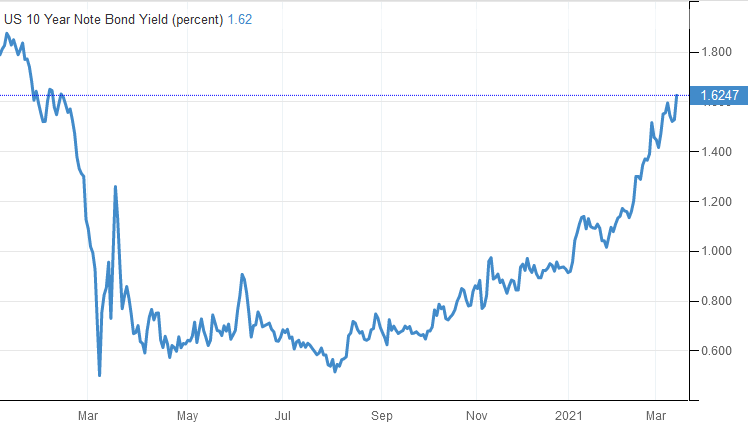 This week the market gets some critical macroeconomic data, including US Retail Sales for February on Tuesday and the Fed's Policy Rate decision on Wednesday. Economists presently forecast a decrease in February monthly US retail sales of 0.6%. January was solid with a 5.3% increase after three previous months of declines and three months prior of weak growth. Economists put January's strong growth down to new government stimulus checks that helped to boost consumer spending. Retail sales growth will need to show continued upward momentum for retail-related stocks to deliver on analysts' 2021 earnings expectations.

Not Every Sector Recovers Equally

Reuters reported over the weekend that Carnival Corporation (NYSE: CCL) anticipates at least two more tough years of activity for the cruise industry, which is unlikely to return to pre-pandemic levels until at least 2023. Carnival in January 2021 reported a bigger-than-expected preliminary fourth-quarter net loss of $2.02 per share vs. analyst expectations of a loss of $1.92, as the company's business was brought to a virtual standstill by the Covid outbreak. (For more see, Is Now the Time to Buy "Activity Stocks?").

US Not Only Recovering Economy

Media reports last week revealed that China is now taking the global lead in moving to unwind its pandemic-driven economic stimulus efforts as its economy recovers from the Covid crisis. China's policymakers have expressed concern about an overheating housing market and want to prevent more significant market imbalances. China's economy recovered its pre-pandemic momentum in 4Q20, primarily because of its success in containing Covid-19 and strong exports.

Related: 3 Tech Stocks That Have Lost Over 30% In Market Value