Where Did Our Commute Time Go?

Pre pandemic, commuting was the bane of many peoples lives. The housing crisis and a lack of spending on infrastructure has led to longer, more onerous, commutes for many workers. The number of people spending more than two hours travelling to and from work every day jumped by 72% over the past decade to more than 3 million. The number of people spending 3 hours or more increased by 75% – with women being disproportionately affected.

A 2006 study from Daniel Kahneman found that respondents ranked commuting as the least enjoyable activity of the day, with a large body of research linking it to marital breakdown, depression and all manner of physical and emotional impacts. Indeed, a 20 minute increase in commute has been likened to getting a 20% pay cut.

The Nine To Five plus a growing commute also locked us into a very rigid formula where we even had to compromise our natural sleeping requirements – ruinous for mental and physical wellbeing. We all sleep differently – and our internal clock shapes our energy levels, ability to focus, and creativity throughout the day. This is known as our circadian rhythm and it has a profound effect on our productivity.

The jury is still out on whether the pandemic has truly ushered in a new era of remote work, or perhaps the shift is merely illusory, but either way many of us have saved a lot of time this year. So you’d think we’d have put it to good use. 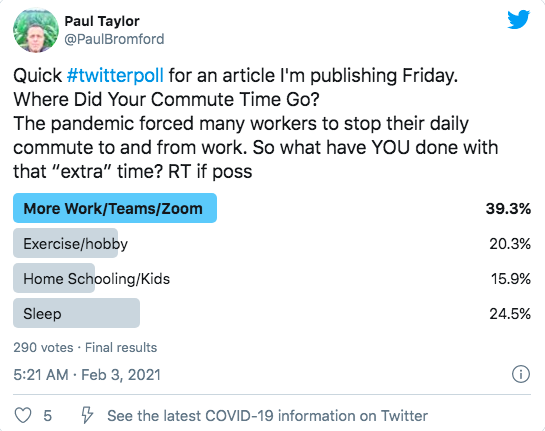 In my highly unscientific Twitter poll, nearly 40% of people say they are just working more. The removal of the natural break of a commute has just extended the work day for many, with it now becoming culturally acceptable to host meetings before breakfast or after dinner. Some people say they are actually making or eating meals – during meetings.

Working through these new social etiquettes, how to be effectively heard, how to ensure we stay on top of the meeting, how to speak up without being rude, is exhausting. Combine that with making the kids breakfast and you’re heading for a crisis.

However some people are loving their new found freedom: 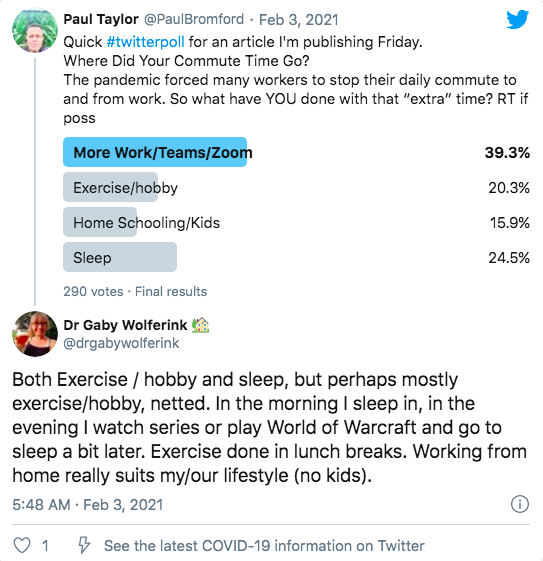 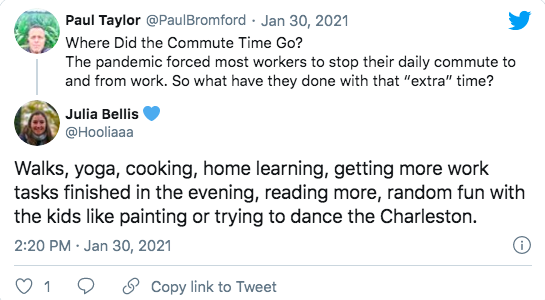 So what explains the different choices people are making? A more scientific study from the US indicates they might not even be choices.

The research found that different types of workers used their time savings very differently. Independent employees (i.e. those without managerial responsibilities) reallocated much of it to personal activities like hobbies, exercise, sleeping, whereas managers just worked longer hours and spent more time in meetings.

Importantly, for managers, the increase in work hours more than offset the loss in commuting time. They not only used the previously allocated commute time for working – they added extra time to it.

Let’s remember the virality of meetings is not a new finding. In 2014, a research team from Bain and Company used data mining tools to analyse the Microsoft Outlook schedules in a large company. It concluded that in one calendar year the organisation spent 300,000 hours in meetings.

Given there are only 8,760 hours in a year that’s quite some feat. It’s because of what they termed the Ripple Effect:

The findings showed that, unchecked, meetings spread. And it seems that this pandemic has acted as a kind of super-spreader for even more meetings.

Of course, it is possible that many of us are exaggerating the hours we are putting in. There is evidence emerging of blurring, the distinction between work and non-work disappearing so it appears you are at work longer than you actually are. We pad the work day out with household chores, exercise or even entertainment. The Harvard study found that often there was no increase in total time spent working, but an increase in work-day spans.

However, the enlightened (or lucky) ones are embracing the new world of work to explore new hobbies, do more exercise, and spend time with their family. Or doing the one thing pretty much guaranteed to make your life all together better: getting more sleep.

So, some of us are thriving and some of us flailing. The irony is that the ones flailing appear to be those with the power to change things. The managers: the people who set the work day rules for everyone else. We can change this if we truly want to. If we really care about people’s wellbeing we can stop this now.

Covid, clearly, doesn’t kill meetings. But we can.

Related: Can The Pandemic Usher In An Era of Creative Disruption?