The “Next Netflix” Has Finally Revealed Itself

A sleeping giant tech stock has awoken. It’s already handing out monster gains. And as I’ll show you today, it’s just getting warmed up.

In fact, it won’t be long before this stock is mentioned in the same breath as hall-of-famers like Netflix (NFLX), Facebook (FB), and Google (GOOG). That’s right. The next great tech stock is growing up before our eyes.

I don’t say that lightly. Within a few years, this company should have over a half billion users and be worth hundreds of billions of dollars.

Spotify is the world’s largest music streaming company. You can use it to listen to just about any song ever recorded on your smartphone. Its library is more than 50 million songs deep, and features everything from Mozart to The Rolling Stones to every parent’s “favorite” song, Baby Shark.

Nearly 300 million people use Spotify’s app. It’s one of the world’s most recognizable brands. Last year, the consulting firm Prophet ranked Spotify as America’s second “most relevant” brand. That’s ahead of Disney (DIS), Nike (NKE), and every other iconic American brand besides Apple (AAPL)!

And yet, Spotify was a “hated” stock until very recently. The chart below says it all. 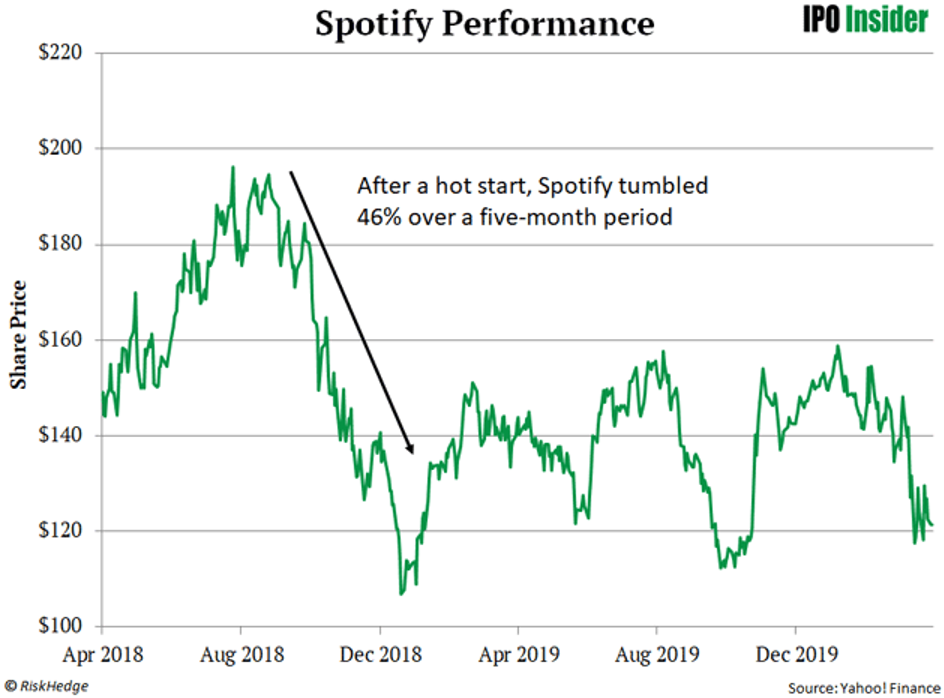 You’re looking at Spotify’s performance since it went public in April 2018. You can see that Spotify got off to a good start. It rallied 32% during its first four months as a publicly traded company. But then it ran out of steam. Over the next five months, it tumbled 46%.

Spotify Was a GIANT Company When It Went Public

It was valued at nearly $30 billion before its shares even started trading. When a company gets this big while it’s still private, it can lead to disaster on its first day of trading. We saw this happen with Facebook (FB). It fell 53% during its first 3 months as a publicly traded company.

The same thing happened with Snap (SNAP). It plummeted 56% in six months after its IPO. But sheer size wasn’t the only thing holding back Spotify. It didn’t have a traditional initial public offering (IPO). Instead, it had a “direct listing.”

In other words, it didn’t hire Goldman Sachs (GS), JPMorgan (JPM), or any other bank to underwrite its IPO. It simply offered its shares directly to the public without any help from Wall Street. No company had ever done this before!

Without the support of a major bank, Spotify fell 10% on its first day of trading. And it spent the next two years treading water. Many investors gave up on the stock…

And That Got Our Team Interested in Spotify Late Last Year

As you may know, buying hated stocks is one of the best moneymaking strategies. When “the crowd” throws in the towel on a stock, I often recommend swooping in to pick up shares on the cheap.

So, our team recommended Spotify last November. We called it our “Number 1 Failed IPO,” because Spotify was arguably the most misunderstood company on the planet.

Most people think Spotify is just a music streaming company. And it’s true. Spotify’s music streaming platform is second to none. The app is simple and easy to use. It’s also “smart.” The more you use Spotify, the better its artificial intelligence gets at recommending songs and artists you’ll like.

But we didn’t recommend Spotify for any of these reasons. We pounded the table on Spotify because it’s rapidly becoming something of a monopoly in the “audio industry.” It’s doing what Facebook did with social media, what Amazon did with online shopping, and what Google did with online advertising. And it isn’t just dominating the music market.

Spotify Has Made an Aggressive Push Into Podcasts

Podcasts are one of the fastest growing industries on the planet. Over the past decade, podcast usage has tripled. Much like Netflix did in streaming, Spotify has established itself as the world’s number 1 destination for podcasts.

Last year, Spotify spent about $400 million on three podcast-related acquisitions: Parcast, Gimlet, and Anchor. Many analysts questioned these moves. They said Spotify was spending too much money.

They were wrong. Spotify’s big bet on podcasts is really paying off. In February, it acquired the wildly popular Bill Simmons Podcast.

Spotify followed that up two months later by acquiring The Joe Rogan Experience—the world’s most popular podcast. A couple of weeks ago, Spotify signed an exclusive deal with Kim Kardashian.

The next day, Spotify announced it had inked an exclusive partnership with DC and Warner Bros. In short, the world’s biggest podcasters, influencers, and brands are partnering exclusively with Spotify.

It’s going to make Spotify an even stronger business than it is today. You see, people still listen to old songs from 40 years ago. But most podcasts go “stale” quickly. So, people will typically download several new podcasts a week to keep up with their favorite programs. Every download feeds into Spotify’s growing “targeted advertising” business.

And its domination comes with another advantage: leverage over music labels. Eventually, Spotify will have so much leverage that the best rising music artists will sign directly with Spotify. That’s right.

In its early days, Netflix was just a “platform” where folks could watch TV shows and movies created by others. The real secret to Netflix’s success was what it did next.

It leveraged its powerful position as the dominant streaming platform to invest in content. Today, many of the world’s most popular shows, movies, and specials are produced and owned by Netflix.

Spotify is well on its way to achieving the same with music and podcasts. And investors are finally taking notice. The stock has soared a 125% since March! 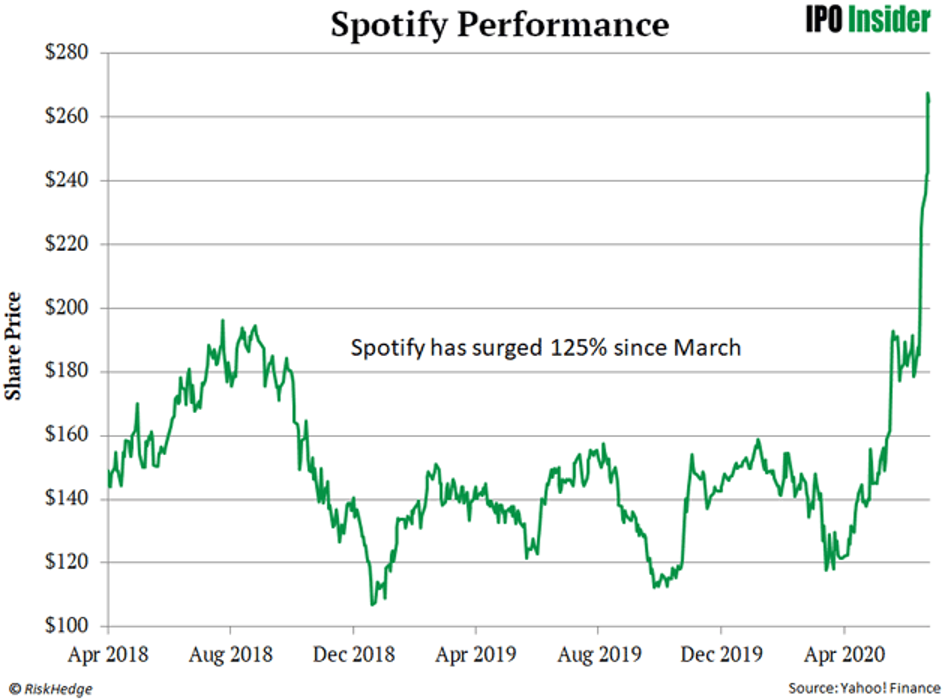 That’s a staggering move. We’re talking about a company worth 50 billion dollars, not a small, speculative biotech stock.

Spotify is, without question, one of the hottest stocks in the world. Eventually, it will likely be worth hundreds of billions of dollars and considered a “hall of fame” stock.