The Invisible Hand of Capitalism

The Fed is more or less doing modern monentary theory (MMT) as we speak.

But rather than giving printed dollars to the Treasury, it’s using the bond market as a conduit. Trillions in bond issuance, financed by trillions of dollars of printed money.

Don’t get me started on the pathetic levels of assistance we are offering American citizens in favor of financially irresponsible corporations.

What we are practicing here is not capitalism. In order for capitalism to work, we must allow corporations to fail. The bankruptcy process works just fine. Sure, shareholders and creditors would experience losses, and this would teach them to be more careful next time.

It is the down part of the cycle that is most instructive. Yet we never get to experience it.

The problem is bigger than just Trump, though. In times like this, there is huge societal momentum to do something. Thomas Massie, the one congressman who more or less favored doing nothing, was tarred and feathered. The word laissez-faire hasn’t been uttered in years.

Tough time to be a libertarian or a hard assets investor, though that may be changing soon.

MMT critics have said all along that if the Fed financed government expenditures, we’d end up with Zimbabwe-style hyperinflation. I guess we’re going to find out!

Gold’s performance has been underwhelming so far, though that may be starting to change. 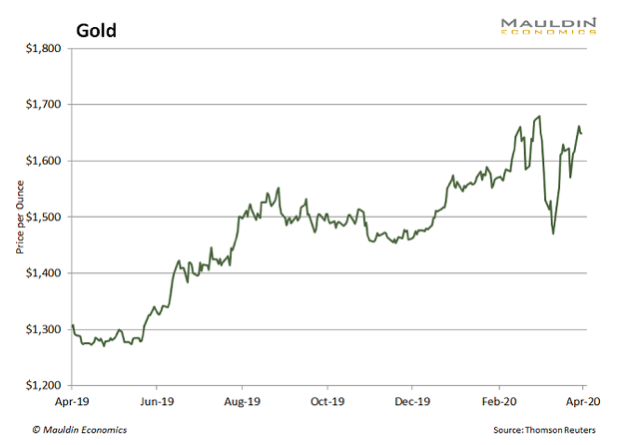 I’ve had to remind many people over that past few weeks that gold typically outperforms after a crisis, not during.

In any case, if gold is going to work, now is the time. We’re looking at:

I haven’t seen any takes on why gold would go down in this environment, except from the Elliott Wave guys. They think we are headed into a deflationary black hole and that gold is going to zero.

Meanwhile, the hyperinflation experienced in Weimar Germany, Venezuela, and Zimbabwe would tell us that we are not headed into a deflationary black hole.

One last point about gold. If you run correlations on gold with various stuff, it turns out that it has the highest correlation to budget deficits. Run the numbers yourself and see.

In recent history, gold skyrocketed to $1,900/ounce with the post-global financial crisis Obama deficits. And it tanked once the fiscally responsible Tea Party Republicans formed an effective opposition.

Socialism is creeping back into the national conversation, so I thought I would comment on how well things are going. Really, they are.

It is the invisible hand of capitalism. Each of us working for his own gain, benefiting us all.

If Trump really wanted to screw this up, he would appoint a mask czar, and attempt to dictate the activities of millions of people. But central planning doesn’t work. It doesn’t work in good times, and it doesn’t work in bad times. And emergencies are not a justification for it.

The doctors will get the supplies they need, in time, and in the right place. The invisible hand will ensure it happens.

Trump’s only job here is to provide inspiration. You can judge for yourself whether he is effective at that.

So while I am a natural-born pessimist, I do not believe that the worst-case scenario will be realized. In fact, I think that it is very, very hard to be short human ingenuity.

For some reason, most people are utterly convinced that our efforts to “flatten the curve” of coronavirus infections will fail. And for sure, there are parts of the country where people are taking the coronavirus less seriously.

But the track record of those who have bet against this country is very, very poor. I am old enough to have a pretty long memory of big failures in markets and governance.

I take to heart the old Winston Churchill quote, which he may or may not have actually said: “Americans can be relied upon to do the right thing after exhausting all other possibilities.”

Get Contrarian Investment Ideas from a Wall Street Veteran

Jared Dillian writes The 10th Man, a free weekly newsletter for contrarian investors. Every Thursday, he delivers a torpedo of incisive commentary that crushes consensus thinking and exposes the true workings of “Mr. Market.”  Subscribe now!

Related: The Stock Market Is Not a Magic Money Machine