If the NFL Season Gets Cancelled, Roku Stock Could Soar

Sports are finally back. Last month, Major League Baseball (MLB) kicked off its regular season about four months later than usual due to COVID. The National Basketball Association (NBA) has also returned. The regular season officially resumed play on July 30.

Of course, things are not quite back to normal yet. The MLB is playing games with cardboard cutouts and “virtual/hologram” fans in the stands. 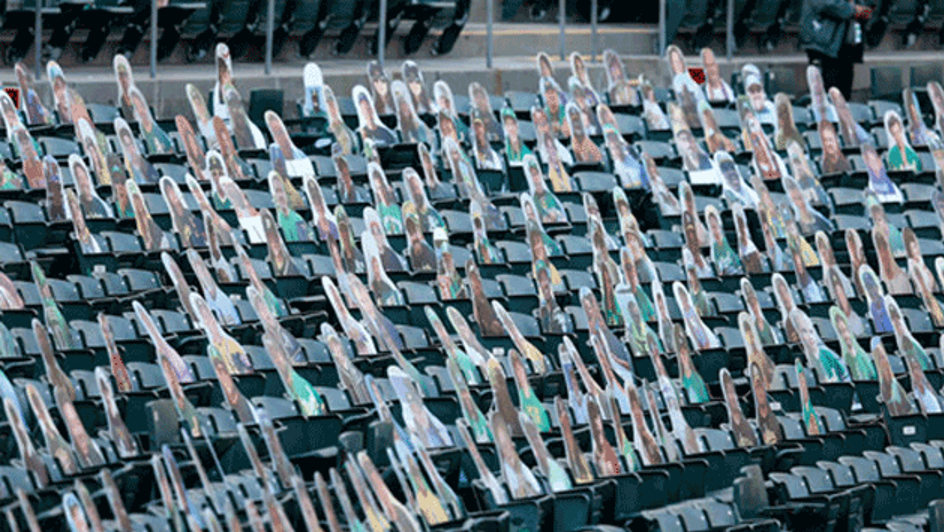 NBA games are being played without fans at “the bubble” at Disney World in Orlando, Florida. Both leagues are doing whatever it takes to keep their sports alive. (The MLB is already cancelling games to prevent the spread of COVID.)

And if baseball is already canceling games, what are the chances America’s favorite sport returns this fall?

I’m talking about the National Football League (NFL). There are over 50 men on a typical NFL team! That’s almost four times as many players as there are on an NBA team. And unlike baseball where players stand hundreds of feet apart, you can’t socially distance during a tackle football game.

I’d be very surprised if we’re watching NFL games this fall. And while that’d be a huge blow for sports fans, there’s one stock that could shoot through the roof if the NFL season gets canceled.

I’ll share this stock with you in a minute. First, let’s look at who stands to lose the most from a cancelled NFL season.

US Cable Networks Would Be In Serious Trouble

Sports generate over 40% of Fox’s annual ad revenue, with the NFL accounting for the lion’s share of that money. Not only that, research firm MoffettNathanson found that the NFL, including pre- and post-game coverage, accounted for nearly 40% of the minutes spent viewing the network last year!

Fox isn’t the only network that depends heavily on the NFL, either. Last year, CBS collected roughly $1.5 billion in ad revenue from NFL games. That represented almost 25% of its total advertising revenue for the year. And that doesn’t even include the Super Bowl!

NBC brought in just under $1.5 billion. That’s more than 20% of its ad revenue for the year. In short, a cancelled NFL season would be disastrous for cable networks. Take it from John Kosner, a former ESPN executive.

“It’s practically the only thing on the minds of the networks… If you lost an NFL season, you’re looking at a financial hemorrhage.”

There’s A Good Chance College Sports Get Cancelled This Year, Too

I say this because new COVID cases are surging in many parts of the country. Unless the situation dramatically improves soon, many schools will likely not allow students on campus. And that would almost certainly mean no college sports.

In fact, the Ivy League has already said that it "will not entertain any sports being played until after January 1, 2021." The Centennial Conference has also canceled its fall sports.

Last month, the NCAA board of governors said it wouldn’t make any major decisions about fall sports championships until August. This tells me the board isn’t confident that it will host championships this year. In other words, it’s just buying time.

This is a huge deal. According to digital advertising giant The Trade Desk (TTD), 60% of cable subscribers say live sports is the Number 1 reason they still have their cable package.

In fact, this is already playing out before our eyes. According to Roku (ROKU), 28% of recent cord cutters dropped cable due to the lack of live televised sports.

And many of these people will never go back to cable, even when things do get back to normal. According to Roku, 4 out of 5 households that cut the cord are happy with their decision. Not only that, 63% of those surveyed said they wish they had abandoned cable sooner.

The shutdown of sports is also killing TV advertising. According to the research firm eMarketer, TV ad spending fell between $10 billion and $12 billion during the first half of the year! This is clearly terrible news for cable companies.

But It’s Great News For Roku

Roku, as you may know, is a cord-cutting pioneer. It’s best known for making the small black boxes that plug into your TV. Its black boxes allow you to easily access Netflix (NFLX) and all your other favorite streaming platforms.

But Roku is much more than a hardware company. It’s quietly morphed into a software company. Like Microsoft (MSFT), Apple (AAPL), and Google (GOOG), Roku has revolutionized its industry by developing its own game-changing operating system.

Today, a third of all smart TVs sold in the US come with Roku’s software platform built in. It’s the standard for today’s smart TVs.

This is why we called Roku one of the top ways to profit off the streaming megatrend in February. Since then, Roku’s rallied 23%. But we see its shares headed much higher in the months ahead, thanks to COVID.

Without sports, more and more people will ditch cable in favor of streaming. And many will choose Roku for its top-notch user experience.

Not only that, more advertisers will shift advertising dollars from cable television to streaming platforms where they can cater ads directly to the person watching.

As we’ve discussed many times here at RiskHedge, cord cutting is one of today’s most powerful megatrends. About one in three US households has never had cable or already cut the cord!

Of course, Roku’s future is still bright even if the NFL somehow returns this fall. To understand why, look at Roku’s year-to-date chart. 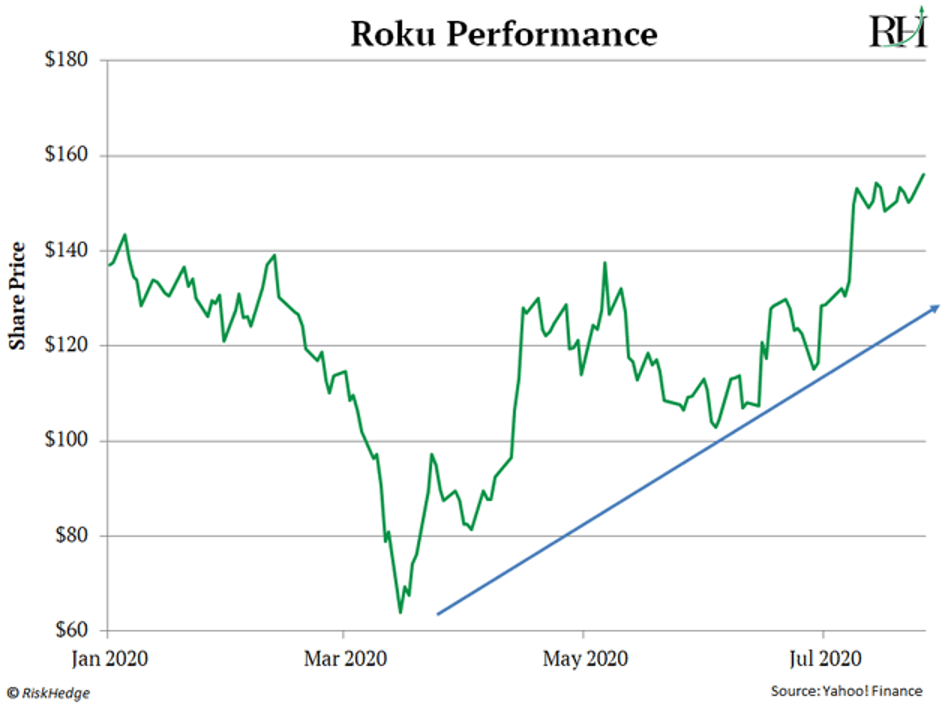 Notice how the stock has been grinding higher since March. Roku also recently claimed its rising 200-day moving average. This tells me Roku is in an uptrend again. And those are the only stocks we want to own in the current environment.

Related: Investors: Here’s What You Need to Know If Trump Bans TikTok