Here’s Where the Next Netflix or Tesla Will Come From

One trade made Baron Rothschild the richest guy on earth. Did you ever hear the saying "buy when there's blood in the streets?"

Rothschild coined the term in 1815 during the Battle of Waterloo. As the British army was fighting Napoleon’s forces, Baron bet his whole private fortune on UK government bonds.

Nobody wanted to loan Britain money when it looked like it might lose the battle. But Rothschild put his money to work when the streets were literally bloody. And when Britain defeated Napoleon, he shot to the top of the world’s rich list.

Rothschild used one of the surest ways to make money investing. He found an investment everyone hated, bought it, and waited for the tide to turn in his favor.

Buying a hated investment is easier said than done. You’ll feel like you’re being reckless. But buying unloved gems is often a path to huge profits. In fact, many of the greatest disruptor stocks share a weird trait—they were once hated. Today, I’ll show you two prime examples… and show you how you can apply this lucrative strategy today.

We know Netflix (NFLX) as the disruptor that invented online streaming. But before that, Netflix started out as the world’s first online DVD rental service. Remember when you’d order a movie online, and a DVD would show up in your mailbox three days later?

Americans loved the old Netflix. You watched unlimited movies for just $10 a month. And Netflix got rid of the worst thing about renting a movie: the late fees. In fact, it was so loved that many Americans paid little attention when Netflix launched its streaming service in 2007. They wanted their DVDs!

By 2011, Netflix had over 20 million paying subscribers. And it was still shipping millions of DVDs in red envelopes every day. Worse, it was paying $600 million in postage to the US Postal Service.

Netflix CEO Reed Hastings hatched a master plan to wean customers off physical DVDs. He knew streaming would completely destroy physical disks. So Hastings decided it was time to rip off the band-aid and go “all in” on streaming.

Against the advice of his team, he split Netflix’s subscriptions in half. Customers could now stream movies for just $8/month. But folks who still wanted to rent DVDs would have to fork out $16/month—a 60% hike.

Although Netflix was ready to go all in on streaming, customers weren’t—and they revolted. Netflix lost almost one million subscribers within a few months. And its stock plunged 77%, as you can see here: 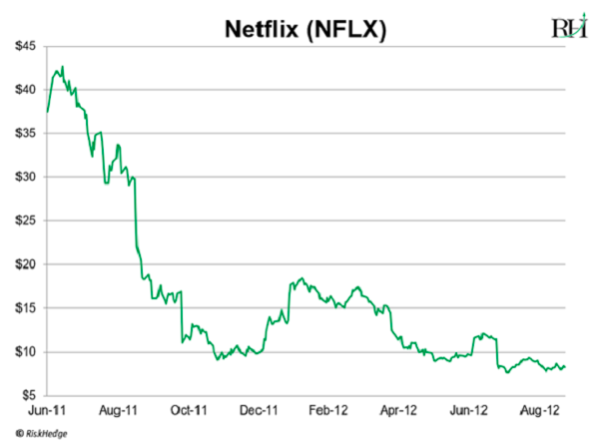 Hastings’ reputation sunk. He went from being crowned Fortune’s Businessperson of the Year in 2010 to The New York Times’ “Worst CEO” of 2011.

The thing is, this was an incredible time to buy Netflix stock. Hastings’ pivot to streaming turned out to be one of the greatest decisions ever. As streaming quality got better, most folks chucked their DVD players in the trash.

In fact, Netflix totally changed our behavior. Physical DVDs seem like ancient history. Netflix had 20 million paying subscribers in 2011 when it bet the farm on streaming. Now it has over 182 million.

And investors who bought Netflix in 2011, when most folks didn’t want to touch it, are sitting on gains of 2,500%: 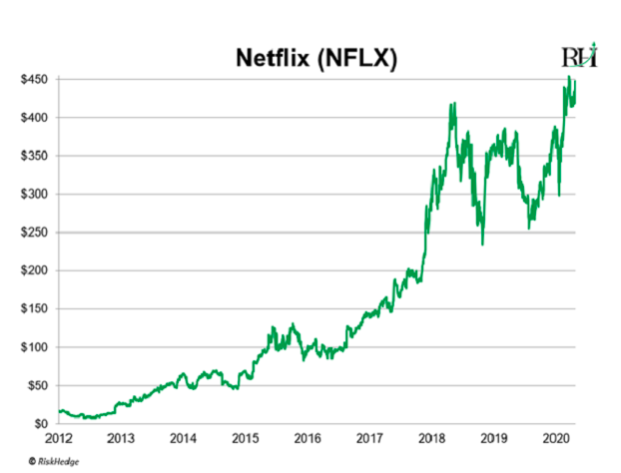 “How close to death did you come?”

As you surely know, Elon Musk is CEO of electric-car pioneer Tesla (TSLA). The self-made billionaire owns five mansions in LA’s exclusive Bel Air neighborhood. But in 2017, he was sleeping on a plastic sofa in Tesla’s factory.

For its first decade in business, Tesla only sold $70,000+ luxury electric cars. But in 2016, Musk unveiled its first mass-market car, the Model 3.

Tesla planned to sell the Model 3 for just $35,000, putting it within reach of millions of middle-class buyers. This car was set to transform the auto industry. Its launch was supposed to be Tesla’s breakout moment.

Instead, it almost put Tesla out of business. In 2015, Tesla was producing roughly three cars per day. To make the mass-market Model 3 work, it would have to crank out 5,000 cars each week.

Tesla was unprepared for the huge ramp up, and consistently failed to hit targets.  Elon Musk worked 22 hours a day, seven days a week to fix its production problems. He regularly slept on the factory floor because he didn’t “have time to go home and shower.”

But almost a year after the Model 3 rollout, Tesla was still struggling to churn out even 2,000 cars a week. And when earnings slumped on higher-than-expected production costs, its stock plunged to nearly its lowest levels since 2016: 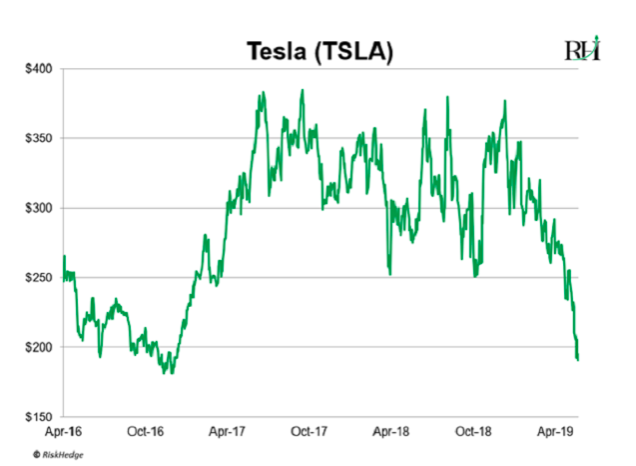 Tesla’s stock had now gone nowhere for five years, and it became the most hated stock on Wall Street. Investment bank Morgan Stanley dropped its worst-case estimate to $10/share. And investors bet a record $15 billion against Tesla’s stock. That was more than double the amount against of any other stock in the market.

Just as is looked like the wheels were falling off, Tesla roared back. In late 2019, it shocked Wall Street by delivering a record 97,000 cars. Tesla followed this up with another milestone, shipping 100,000+ vehicles in one quarter for the first time.

And investors who piled into Tesla at its depths have been rewarded handsomely. The stock soared 360% to record highs over the past year: 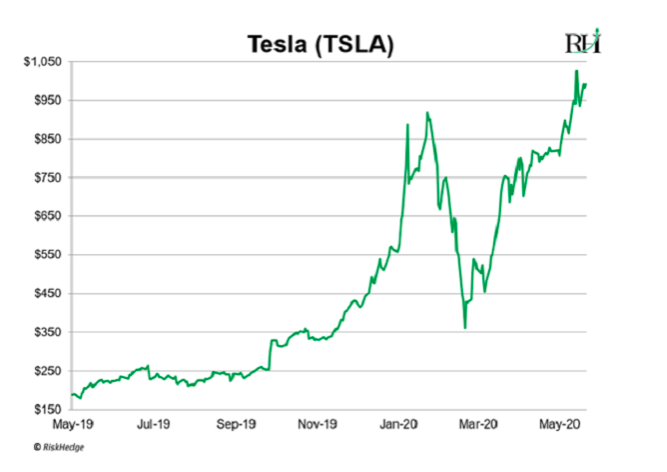 Investing is all about expectations. Stocks often soar—and plunge—based on how they do relative to investors’ expectations.

When folks believe a company is set to dominate the world, it creates a big hurdle that’s hard to clear. For example, in 2006, Google (GOOG) reported a 97% jump in sales. You’d think the stock shot up on stellar earnings, right?

Instead, it cratered 16% when the market opened. In short, Wall Street was disappointed because it expected Google to grow sales by 100%+. In contrast, when investors hate a stock, they set the bar so low that it’s hard not to clear it.

So when a despised stock—like Tesla—sells more cars than investors expect, it rockets higher. In short, if you want to make big money, you must consider buying hated stocks.

Related: A World of Cars that Can Now “See”