Erasing History And The Impact On The Markets

Yesterday Illinois State Representative LaShawn K. Ford advocated for the abolishment of history classes in the state of Illinois stating that current history teachings lead to a racist society.  According to NBC News in Chicago, Ford is sponsoring a bill that will allow elementary schools to teach children about the civil rights movement.

Ford’s rhetoric is part of a national movement that has engulfed the U.S. in peaceful and not-so-peaceful protests since the beginning of June.  In Spectrem’s most recent research report, Investors and the Election: A Guide for Financial Advisors in 2020 (download a complementary copy ­­HERE), investors were asked their opinions regarding the removal of statues and monuments, the re-naming of military bases and public schools, and the overall impact of recent riots on their vote in the fall.

What do investors think?

Thirty five percent of investors agree with the removal of all statues and monuments that honor past people who may have been slaveholders (including Thomas Jefferson and others).  Fifty percent disagree.

Thirty seven percent of investors believe that the names of public schools named after Confederate war leaders should be changed.  Forty-two percent disagree.

When asked to rate on a 100-point scale (with 0 being “Not at all concerned” and 100 being “Very Concerned”) investors ranked their concern about the recent riots and overall law and order in the United States at 70.25.  When asked how much influence the current riots and demonstrations and related issues might have on their Presidential vote in November, 48% of investors indicated these issues would influence their vote, and results were similar across political affiliations.

And how will this impact the markets?

As you can see below, investors generally believe that the markets will be higher at the end of 2020 if President Trump is re-elected. 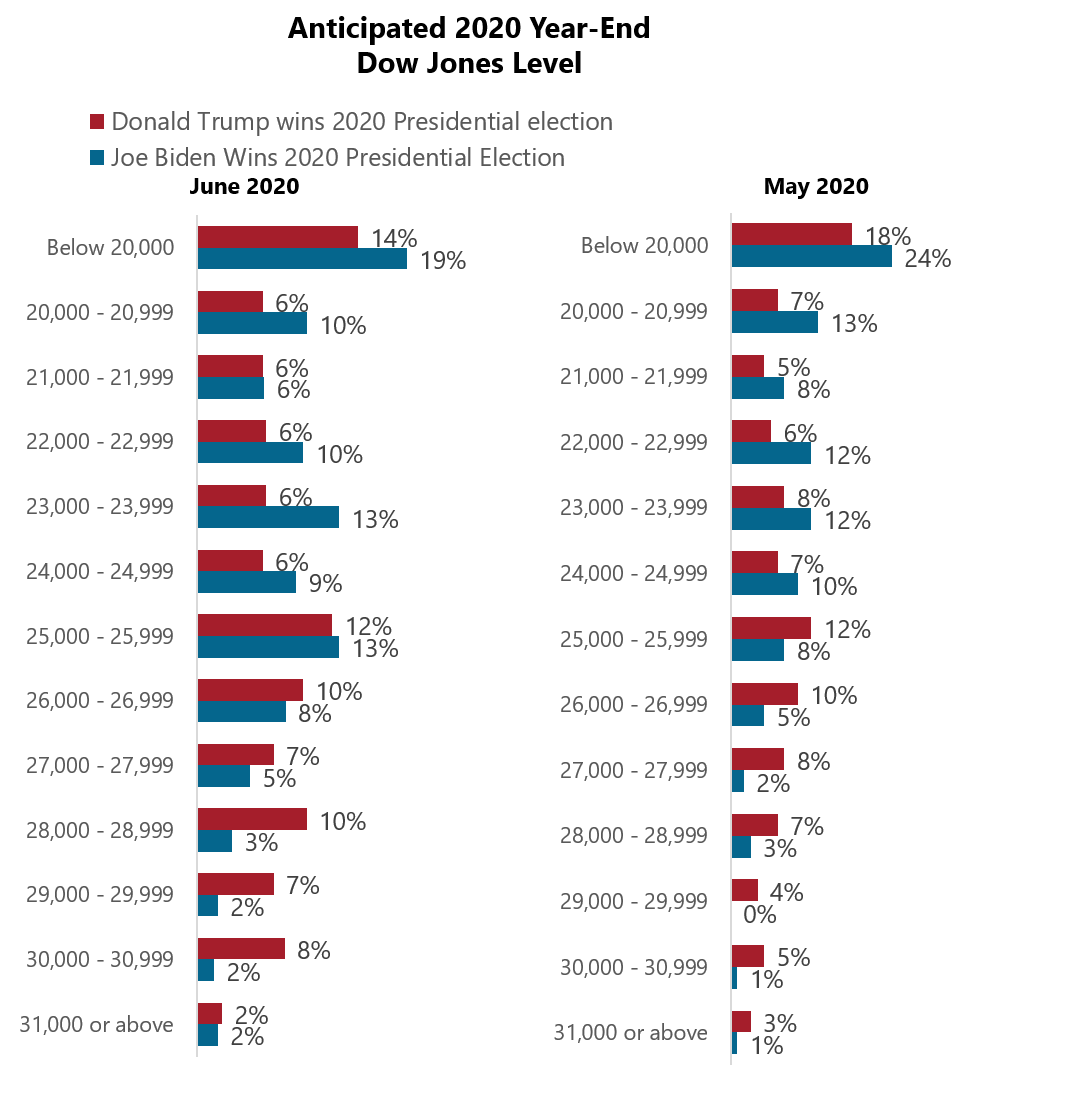 What should advisors do?

There is no need to discuss “hot” political topics with investors, however, it would be prudent to discuss potential market volatility related to the upcoming election.

Discuss any potential changes investors may want to make based upon economic and market volatility in the upcoming months.

Be willing to listen to their concerns and answer their questions – even if there aren’t really any “good answers”.

Many investors are sitting on cash (according to Spectrem’s research).  This may be a good time to discuss with them their intentions for that cash.  Don’t be surprised if they want to retain that cash until after the election.

While we are currently living through unprecedented times, understand that investors are somewhat nervous and fatigued regarding the existing economic and political environment.  Just reaching out to investors proactively with a willingness to listen to their feelings and concerns...both financial and otherwise...will help to increase their long-term loyalty.

Related: What Will Be the Most Important Factor When Predicting the Outcome of the Election?