Will Fed and Trump Save the US Economy And Sink Gold?

The Trump administration will seek an additional $250 billion to support small businesses hurt by the widespread economic shutdown and slowdown. Will the government and the Fed save the US economy? What would be the consequences for the gold market?

As of April 7, more than 360,000 people were confirmed to be infected by the coronavirus in the US, and more than 10,000 out of them died because of the COVID-19, as the chart below shows. Actually, the US is entering the worst period of the epidemic, as hospitals are struggling to maintain and expand capacity to care for infected patients. 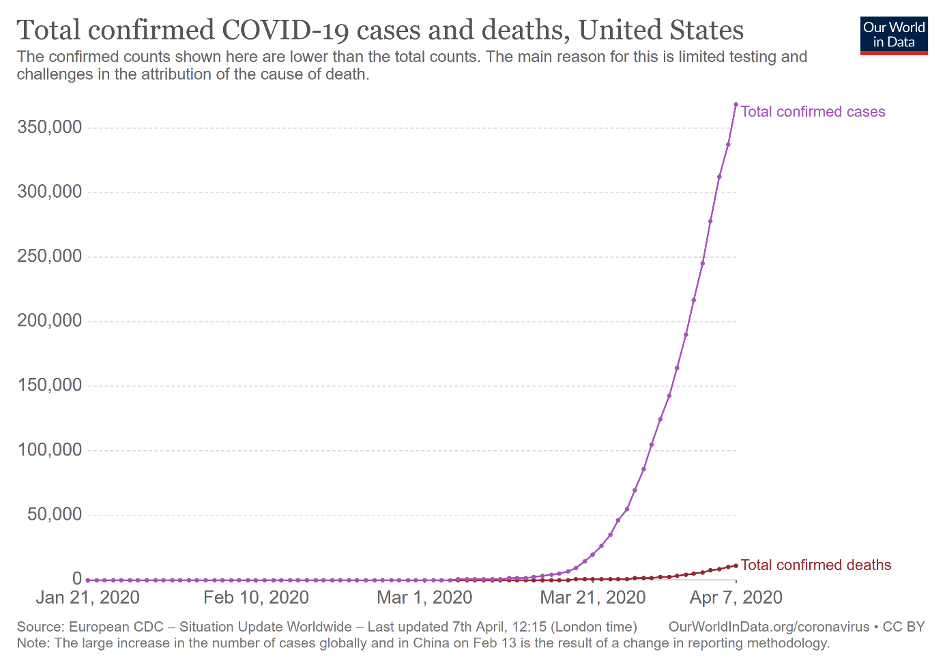 As a result, the US still follows an exponential growth of COVID-19 cases, doubling in less than three days. Indeed, as the chart bellows shows, the epidemiological curve is very steep, steeper than in Italy or Spain. Partially it results from the late reaction, especially in some states. The decentralized responses to the pandemic, combined with the travels of Americans, may lead to the new outbreaks of the epidemic and a longer road to “flattening the curve”. 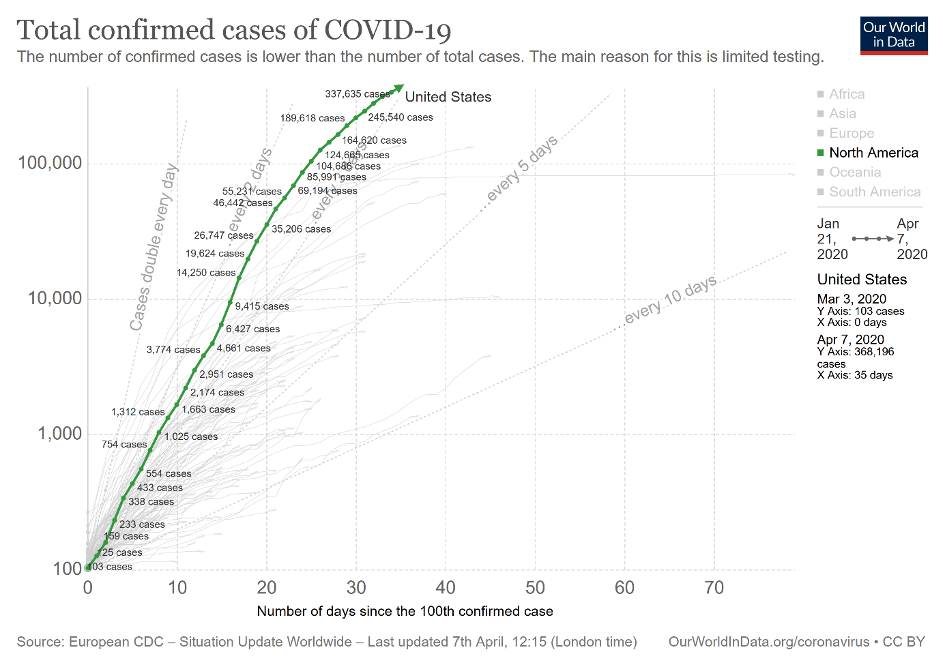 It’s true that lockdown and social distancing are working and we can see a peak probably in May. Thus, stock markets became more optimistic recently. Although it’s true that we will ultimately control the pandemic, it does not mean that we could lift all the restrictions anytime soon. If we do so too early, the epidemic can rebound right back. Actually, some epidemiologists and economists believe that we will not be back to normal this year. In other words, the epidemic will not end with a sudden all-clear.

Why? Well, it’s simple: the vast majority of the population haven’t been exposed yet and will not have immunity until the vaccine arrives. By then, people will socially distance themselves without chance of developing natural immunity. Let’s ask yourself: if the government lifts all restrictions today, are you going to fly abroad? How about a cruise voyage, or a stadium concert? Maybe even a crowded cinema with lots of people coughing? Well, you have just reached an answer! This is why I’m skeptical about the V-shaped recovery. And this also why I do not believe in fiscal stimulus.

Will Government Save the Day?

In the last edition of the Fundamental Gold Report, I wrote that the expansion of easy monetary and fiscal policies can cushion the initial hit, but they will not prevent the crisis. Why do I think so? As I said earlier, we will still have social distancing and as a result, life at half capacity (think about sports events without spectators, the lines of people six feet apart before grocery shops, or restaurants with seats every other table). This is why no amount of money will revive such an economy!

Don’t believe me? Let’s do the math! The calendar-year 2018 sales for the S&P 500 were $11.35 trillion. So, let’s assume for simplification that it is $1 trillion per month. So, just to make up for half of the revenues, the government will have to pay half a trillion per month, or more than 2 percent of the GDP! And we are talking only about the companies from the S&P 500, although small and medium companies are much more severely affected!

Second, the current US rescue package is poorly designed. Have you seen the spike in the claims for unemployment benefits? They would increase anyway, but the government actually encouraged people to go for unemployment, simply because unemployment-benefit replacement rate is 116 percent. Yes, it means that the average worker can get 16 percent more collecting unemployment than he would on the job. I’m not a labor-market expert, but there’s something fishy here!

Third reason is that the governments have also limited resources. They cannot pay half of all bills for months. Or, I should say, they can – if they issue more government bonds. But then we have higher public debt and increased risk of a sovereign debt crisis.

Or, the governments can turn to printing money. And this is a ready recipe for an inflation. Inflation is, of course, bad – but gold is not afraid of it! Actually, gold is a decent hedge against inflation – especially, if price increases accelerate.

Last but not least, on Tuesday Steven Mnuchin said that he would seek an additional $250 billion to support small businesses hurt by the widespread economic slowdown. So it seems that the current programs are not enough. We are not surprised. Are you?

All this means that gold should ultimately benefit from the current crisis – either because we will have a debt problem, or we will have an inflation. But, what is perhaps even more important, the postpandemic world will be different from the prepandemic world. The social distancing will not disappear until the much-touted vaccine arrives and in such an economy, the appetite for  risk is going to be lower. Instead, we should see a shift toward safe-haven assets such as gold.

Related: 10 Million Americans Applied for Unemployment. Will Gold Save the Day?