Rally Over? The Point Is ‘Smoot’

You have probably heard that “history doesn’t repeat, but it often rhymes.” Well, the further we travel through 2020 (even if we can’t travel much the way we are accustomed to), history is turning into quite a poet.

Recently I brought to your attention some economic similarities that occurred a long time ago, but which I truly believe have relevance today. Because at it’s core, human behavior doesn’t change radically. We are wired a certain way. And, since markets move based on decisions made by humans (and increasingly by human-inspired algorithms),  we simply can’t ignore parallels to past periods in economic and market history. 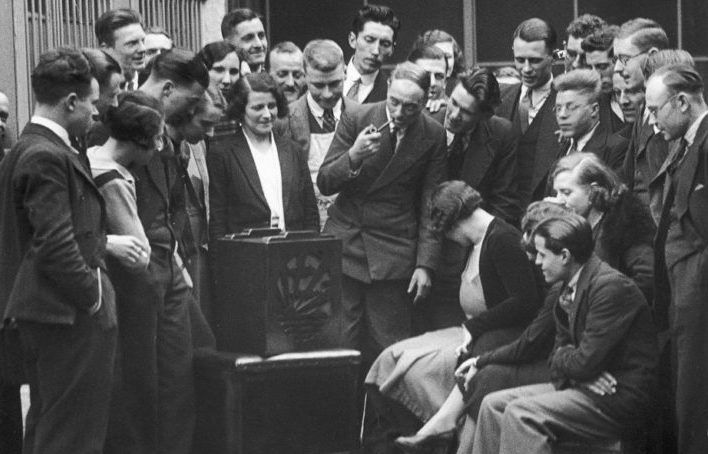 Markets and Tariffs and Bears, oh my!

The table below simply says this: there is a remarkable similarity between how 1931 (2 years after the “Crash of 1929”) played out and the way this version of a recession/depression-era economy is developing. In fact, one thing I left out of my recent piece on the subject was a mention of the Smoot-Hawley Tariff Act, in which the United States slapped tariffs on about 20,000 imported goods. This occurred in 1930, one year before the market went from tenuous to, well, not so good. Sound familiar?

I have set this up so that we can come back to it as the year moves along, just in case we have to consider this serious threat to retirement wealth any more than we already do. The first 3 rows are “in the books” already. As the right half of the chart shows, the Dow peaked this year on February 12. It fell from that high level by 37%, then rallied back by over 32%.

Quite an 11-week period there! That left the Dow at 24,634 when it topped out last Wednesday, April 29. That’s about 17% below where it peaked in February.

If you play out the left side of the chart from 1931, and then project it to the right side of the chart for 2020, you see where the Dow’s price could go if the similarities continued. To summarize, we’d see the worst of it in the coming months, with the Dow dropping to the 13,000 area. That’s a Dow level not seen since early 2013.

As is typical of bear markets, the Dow would then rally hard (again) to well over 17,000. Then, just when we thought it was safe to go back in the equity market water, the year’s final push downward would bring the Dow to around 11,000.

I know that you are looking at this saying “that can’t happen, can it?” I am not a wizard, and no crystal ball lines my desk. However, I am a realist. And since the last 2 bear markets (2007-2009, and 2000-2003) each saw the Dow drop in the 50%+ range, is this a possibility to include when setting your portfolio strategy for the rest of the year? I think you know the answer.

You might be wondering, if this is playing out so much like 1931, where are we now, and what would a “Back to the Future” chart of the Dow look like? Answer: take the value of your S&P 500 or similar U.S. equity index fund, cut its value in half, and there you go. See the chart below, measured from where the first Dow “bounce” ended after the first Dow “crash” in 1931. 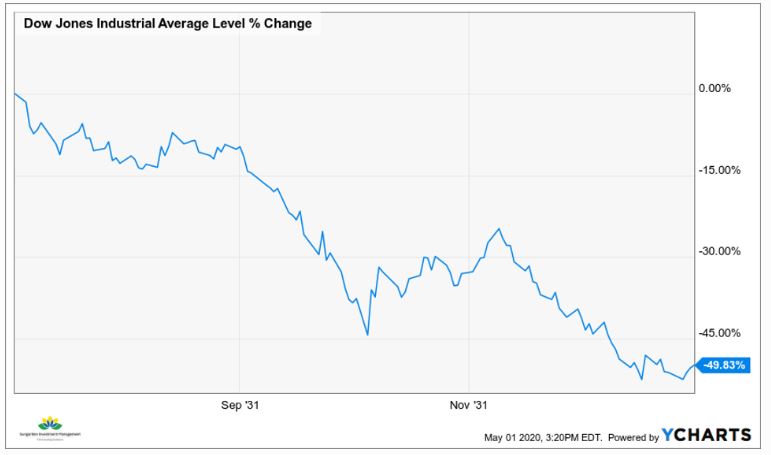 As you might imagine, I have done a lot of this work over the years. It is part of my overall process of marrying technical, quantitative and fundamental investment market analysis. After all, without history, you are doing a lot more guessing than you should.

This is only a drill?

This is one of the stronger developing trends I have seen. It could go nowhere. However, if an investor chooses to ignore the potential for “worst-case” outcomes, that over-confidence can ruin a retirement plan. There are many possibilities in every stock market climate. The key is to efficiently evaluate several, and determine a prudent allocation of your assets based on the probability of different scenarios actually occurring. That gives you a big leg up in years like 2020….and 1931.

Related: How To Interpret The S&P 500 Rally