Stocks declined but won‘t they run higher next? Tuesday‘s downswing changed precious little, and the Congressional testimony was a non-event. The key happening was in long-dated Treasuries, which rose yet again – the much awaited rebound is here, and brings consequences to quite a few S&P 500 sectors.

The index is likely to advance, but the engine is going to be tech this time – not value stocks. I view this as a deceptive, fake strength in the bull market leadership passing over to value inevitably next. That‘s why I expect the S&P 500 advance to unfold still, a bit rockier than it could have been otherwise. This will hold true for as long as TLT is at least somewhat rising:

(…) technology would recover some of the lost ground on rates stabilization. ...the $UST10Y move has been a very sharp one, more than tripling from the Aug 2020 lows.

Technology though declined yesterday, and so did value stocks. Many markets went through selloffs yesterday, among commodities most notably oil. While nothing has substantially changed, we got a serious whiff of risk-off environment, pertaining precious metals too.

Especially concerning was the miners underperformance, given that none of the moves indicated accumulation within the sector. Reason number two to expect PMs short-term vulnerability was ignorance of retreating yields that stretches a bit further below what can be viewed as a run of the mill PMs upswing correction. A short-term crack in the TLT decoupling dam that can still be reversed even though it doesn‘t look likely at the moment – better not to wave it off it though. 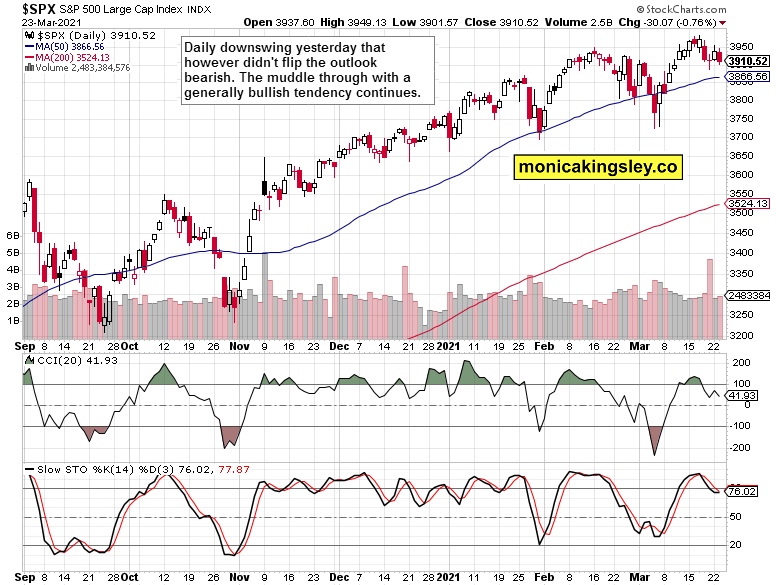 Regardless of yesterday‘s setback, the outlook in stocks hasn‘t changed. Once the current corrective move is over and value reassumes leadership, expect the gains to be more pronounced than what we would experience rather shortly. 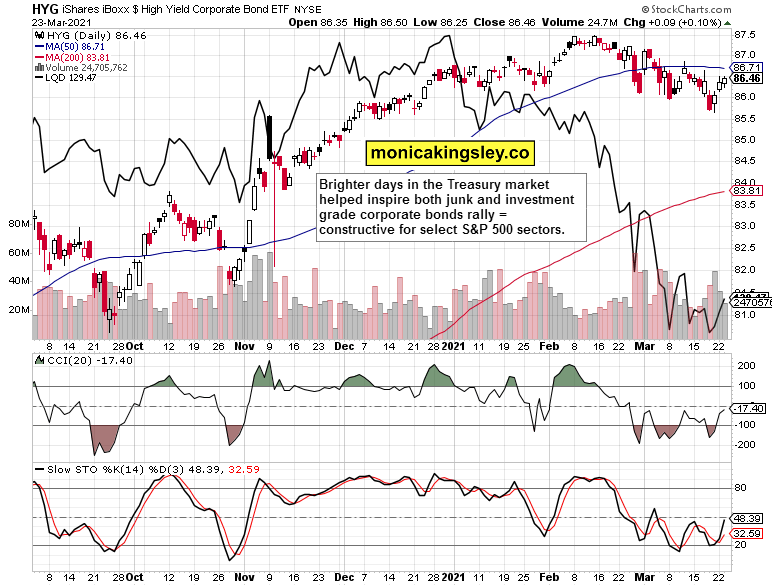 Both high yield corporate bonds (HYG ETF) and investment grade corporate bonds (LQD ETF) moved higher, and in the latter, the upswing was backed by a rising volume. The bond markets are coming back into favor, taking a little luster off the stock market appeal on the daily basis. 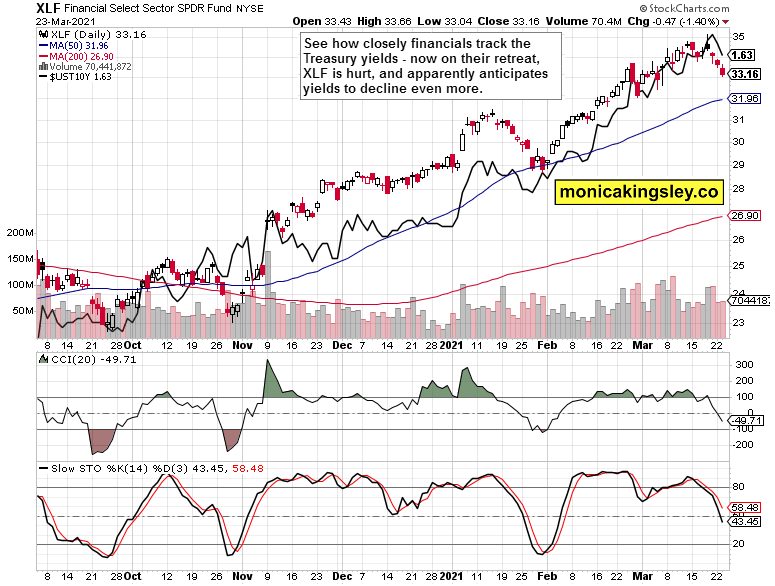 Nowhere is yields influence better seen than in financials (XLF ETF), which give the impression of expecting futher retreat in yields, and haven‘t thus far reached any meaningful support. That would provide headwinds to the S&P 500 advance, especially as it translates into other cyclicals. 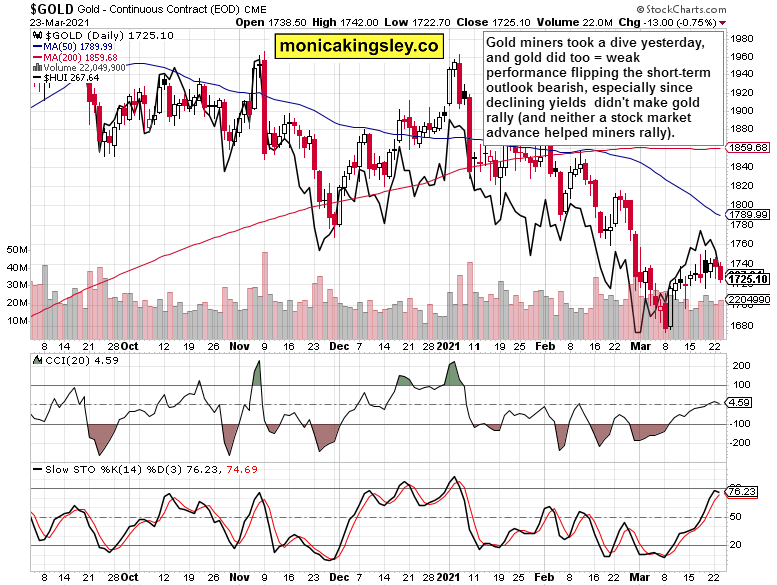 Given the above chart, my yesterday‘s words ring even truer seeing Tuesday‘s closing prices:

(…) Similarly to Mar 12, the precious metals upswing is being challenged – miners (GDX ETF) are underperforming. Today‘s session will tell whether we‘re witnessing consolidation, or a renewed rollover to the downside, the chances of which have risen yesterday. 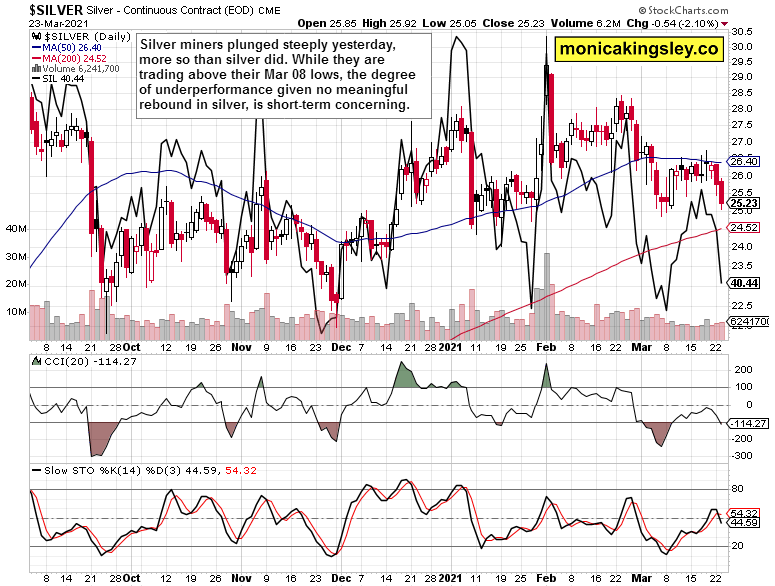 The bearish turn is just as visible in silver and silver miners, and it would be premature to declare it a bullish divergence. Given that silver bulls didn‘t attempt a rebound, and volume isn‘t consistent with capitulation, the risks to the downside materially increased.

The full precious metals sector got under serious pressure yesterday, and so did copper. Given the upswing having rolled over to the downside yesterday (especially when viewed through $HUI:$GOLD metrics), the bulls have to prove themselves through a stronger action than a dead cat bounce.

S&P 500 upswing has better prospects of continuing than not, and the volatility and put/call ratio readings confirm we aren‘t in for a true setback really. The stock bull market is far from having made a top, and will continue grinding higher.

Gold and silver decline going hand in hand with even weaker miners, means that the upswing was effectively ended – the only thing that can bring it back, is renewed miners outperformance and expected alignment of the yellow metal to Treasury yield moves, which is absent at the moment.

Related: Are the Markets Playing a Dangerous Game of Chicken?