Why Inflation Trades Have Further to Run

S&P 500 ran out of steam shortly after Friday‘s open, yet caught fire before the close. The sectoral disbalance driven by retreating yields went on, and tech remains still the engine of stock market growth – but look for the leadership to broaden into financials, industrials or energy as we go forward. Volatility made a new 2021 low while the put/call ratio has sharply risen to more neutral readings.

Paring the bets is getting underway before this week‘s FOMC – the Fed is perceived to perhaps want to at least start debating taper, if not present the sketch of its seriously watered down shape. They‘ll make taper hints and noises at most, it would be much ado about nothing – the markets are just getting spooked now, most notably the dollar (having risen on the unreasonable expectation something palpable and material would come out of that – but remember, talk is cheap, and Jackson Hole is the more likely venue and time that would happen, with 2022 most probably being the year of taper).

Another example of undue anticipatory reaction is Friday‘s gold weakness, in all likelihood to Thursday‘s Macron push to make G7 sell their gold to bail out Africa. Gold market appears taking it seriously, which wouldn‘t benefit the G7 populations during these times of still uneasy monetary activism left and right.

Back to stocks – the 500-strong index increase was defensive in nature, with tech delivering the lion‘s share. Value is sputtering during the yields reprieve that I see lasting through the summer. Autumn, that would be another cup of tea – apart from the unyielding $CRB index, rising oil prices affecting sectors beyond transportation, and the job market heating up (hiring difficulties), the serene period in Treasuries would be over. Yes, that means I think the bond markets have it wrong with their sudden appreciation, and that equities and commodities are right not to tumble.

Deflationary episode or a noticeably disinflationary one isn‘t in our future – the disconnect between inflation expectations expressed as TIP:TLT and RINF, is growing. Just as the experience on the ground. Even if we take a look at 2-year basis (May / Apr 2019 as a starting period to take out "low base argument“), we get per annum CPI for May 2021 at 2.55% and Apr 2021 at 2.23%. Hardly a deceleration, but a continuously building up inflation momentum when prior months are equally robustly examined.

Inventories are down across many sectors beyond autos, and need to be replenished as economic activity isn‘t going down and parts of the world are reopening. That would help put upside pressure upon prices, even to the point of inflation surprise spikes – economic activity isn‘t moving down, and the inventory buildup would spill over into 2022.

When I stated on Tuesday that inflation would be sold as being for our own good, it indeed is – remember that both the Fed and Treasury want higher inflation. One more sign to put the transitory argument at bay, and one more nail in the dollar‘s coffin. As if the heavy spending wasn‘t breaking the camel‘s back already – and no, the $6T boondoggle reshaping and adjourning doesn‘t count as making a difference.

Gold is getting inordinarily spooked while neither miners nor silver nor commodities would call for that – Macron effect and taper fears in play. When I look at the key ratios, including copper to 10-year yield, the yellow metal‘s weakness is unjustified, especially as relates to silver. Keeping in mind the big picture, it‘s when the Fed moves, or declines to move as per market perceptions, that precious metals would benefit. The current on guard position in case they did the right thing and fought inflation, is misplaced. At the same time though, the miners to gold ratio had a third consecutive week of retreating – quite a consolidation waiting to be reversed.

Crude oil knows no respite, and doesn‘t mind rising in spite of weaker oil index or XLE, the energy ETF. Part of its allure apart from the supply situation comes from the real assets drive, the unyielding $CRB index, and the rising economic activity. Corrections remain to be bought, and $68 remains a memory.

Bitcoin has broken above the declining resistance line connecting May and Jun rebound highs, but Ethereum isn‘t thus far mirroring its relative strength. Both cryptos remain rather choppy, and the Saturday down, Sunday up trading shows that.

On a different note, tomorrow there will be no regular analysis, only brief updates should the market conditions including retail sales data require that. I need to set aside serious time and give color to the important and beneficial negotiations about the future. Thank you for your support and understanding – I hope that one day would be enough. I have thus prepared a longer piece for today, and will be back in time well before the Fed with the regular daily report on Wednesday. 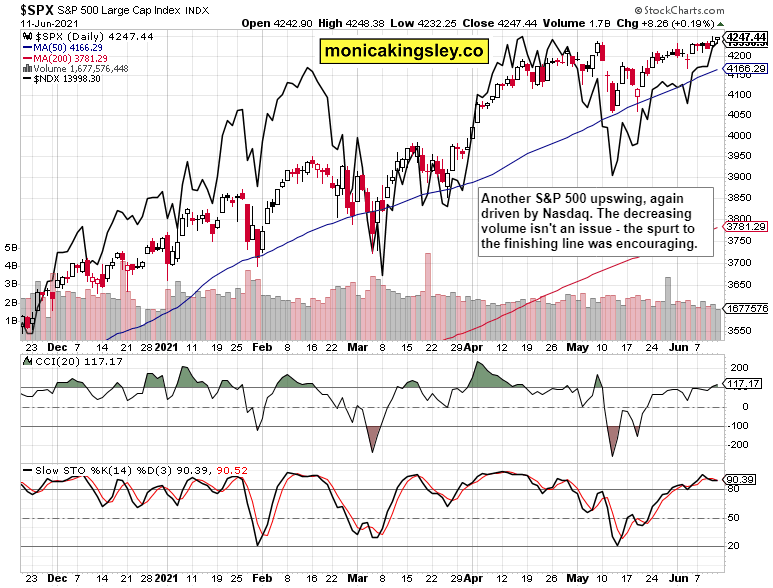 S&P 500 upswing was once again clearly driven by the Nasdaq surge, which didn‘t look at the daily pause in yields.

High yield corporate bonds have wavered, but given the rest of the credit markets‘ performance, the HYG close wasn‘t all too weak.

Miners declined, but refused to lead gold to the downside. The yellow metal‘s decline is most probably the Macron effect and Fed fears result as the move in either real or nominal rates doesn‘t justify that in the least. But again, I think this Treasury rise would ultimately fail, and rates would be back to rising.

Silver outperformance isn‘t stark as regards commodities, and the copper to 10-year yield ratio isn‘t flashing warning signs for the white metal. Once the uncertainty in the king of metals is removed (needless to say, no new flush of supply through the open market a la central bank sales decades ago, is what the gold market would welcome the most), the current consolidation can be resolved through another upswing. 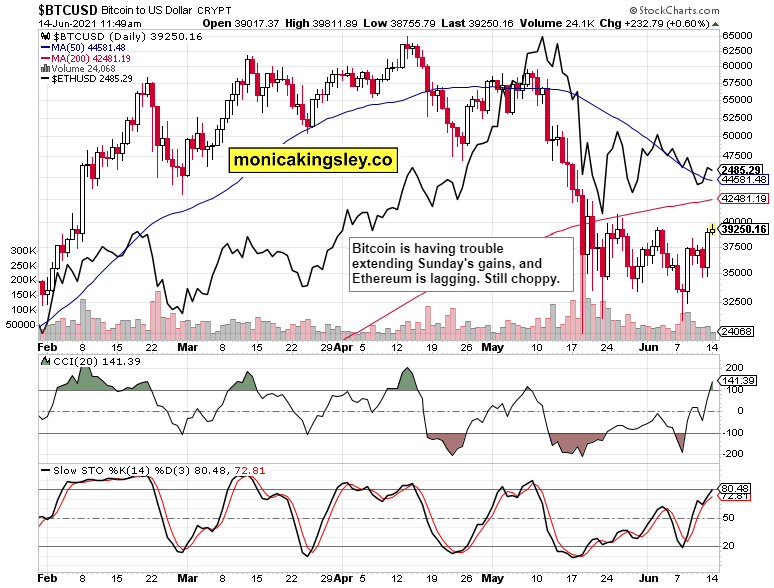 S&P 500 remains well positioned to push higher unless value stocks panic over retreating yields again or to a greater degree than before. Nasdaq upside momentum is strong enough to cushion stock market downside at the moment, and credit markets aren‘t in a risk-off mode.

My Wednesday‘s words about gold being more vulnerable than silver to a scared dump, came true – only the catalyst was different. Miners weren‘t spooked to such a degree on Friday though, meaning the gold storm might not be as serious as the mounting fears indicate.

While ripe for a breather, crude oil once again didn‘t take one, but the oil index weakness (sideways consolidation) warrants short-term caution – the oil outlook though remains bullish.

Bitcoin moves aren‘t yet mirrored at least equally strongly in Ethereum. While encourating gains, the bulls can‘t celebrate just yet.

Related: The Inflation Storm is Coming