Wednesday – another day of strong gains in stocks. Where is that elusive top – will there be one? Given the limited maneuvering room of the Fed and its rising balance sheet, I am not expecting any surprise move to throw the bulls out of kilter. That doesn't rule out some temporary volatility, which is more likely to coincide with rising rather than declining stocks. The anticipated autumn storms certainly aren't here yet.

The big picture remains the same – an uneven, yet existing economic recovery. Given today's Jackson Hole importance, I'll take you through quite a few different markets in order to arrive at where in the current cycle stocks stand.

The bears won't probably like it. Their time in the limelight will come, but it really doesn't appear to arrive today or tomorrow. The rip your face off rally in stocks goes on. 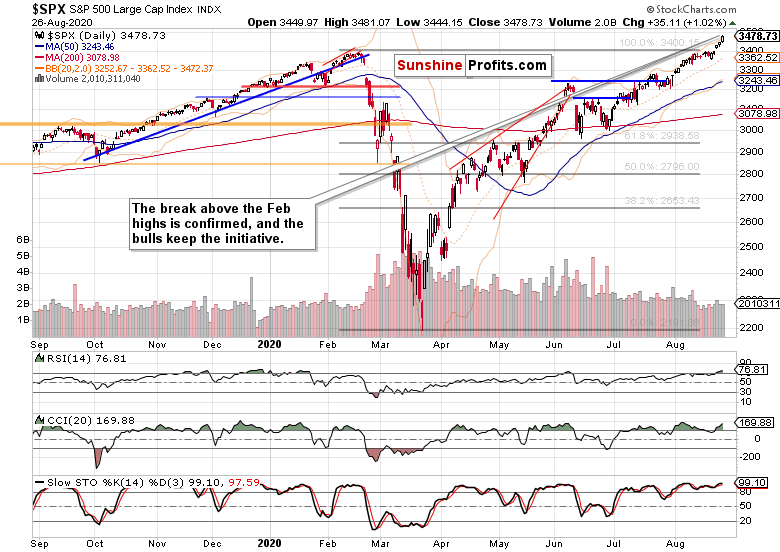 Such were my yesterday's observations:

(…) Clearly in the driving seat, the bulls are back. The breakout above the early Feb highs has a high likelihood of being confirmed by the third consecutive daily close, and yesterday's decreasing volume during sideways price action shows that the bears are unwilling to engage the bulls. In other words, that's a daily consolidation to me in what's a slow or not so slow, rip your face off rally.

The breakout is now confirmed as the bears haven't really appeared yesterday either. Even though the volume is relatively low, it doesn't detract from the rally's credibility in my eyes – it serves to merely make it less credible for some, while the stock upswing goes on. Until it doesn't, naturally.

But can I call for a top with a straight face, given the price action in stocks? No, the trend remains up – there is no sign of its reversal.

High yield corporate bonds (HYG ETF) keep consolidating with a bullish bias, but the two daily upper knots are short-term concerning to me yesterday (please see this and many more charts at my home site). I wouldn't be all too surprised if the bears stepped in on an intraday basis at least. 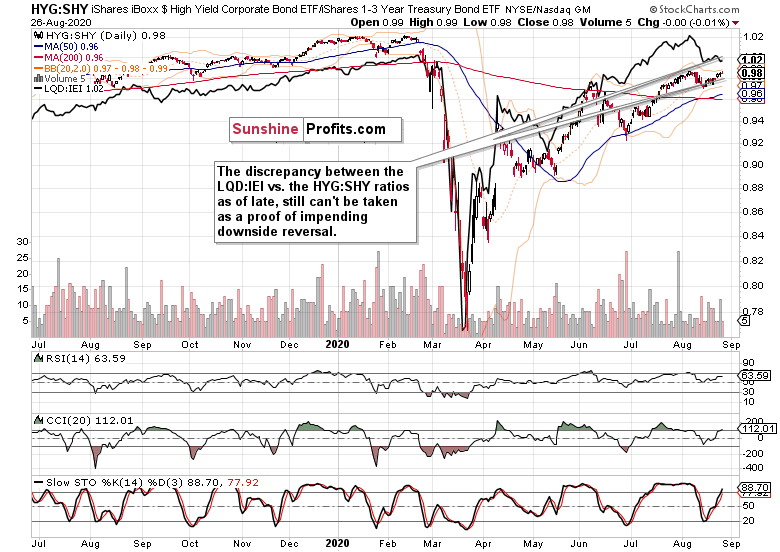 Prolonged sideways move in both without a steep decline in either, seems to be the most realistic outlook for the coming sessions. Unless the risk-on sentiment (as evidenced by PHB:$DJCB too) is broken, I look for stocks to be relatively more sensitive to the HYG:SHY ratio.

This would be consistent with the quality bond holders demanding higher yields as the narrative focus shifts to inflation that's bound to hit at one point.

Stocks are defying gravity, becoming ever more extended relative to the HYG:SHY ratio. That perfectly illustrates the rising greed, which can naturally keep growing some more before reaching truly obscene readings. For now, the stock market is clearly willing to keep going up in its uptrend.

(…) Stocks are getting my benefit of the doubt, and riding the upswing with a reasonably tight stop-loss is my preferred course of action in these circumstances.

Overview of Treasuries, Gold, and Much More 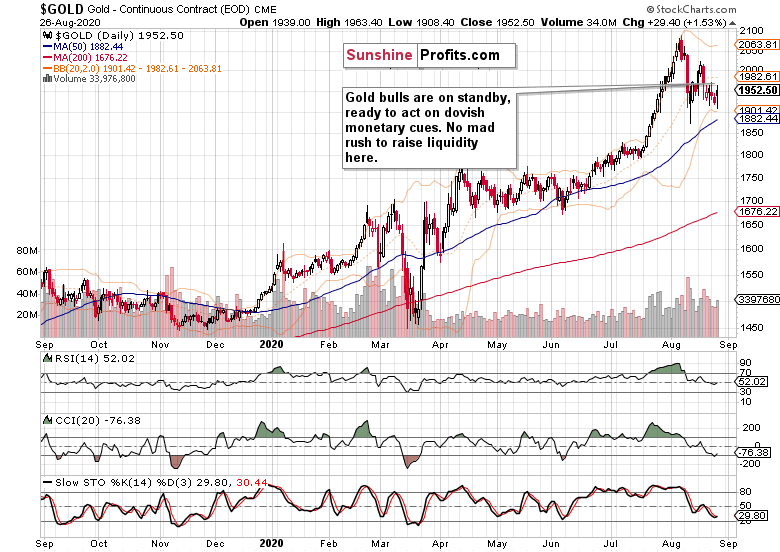 Gold bulls still look very much ready to step in and buy at lower prices. Neither the volume, nor the corner the Fed has backed itself into (not that the deflationary corona collapse gave it much choice), provide much in terms of chart or narrative support to push prices very steeply lower.

I look for some sideways consolidation, base building before the next upleg (which can easily come on the heels of Fed's increased tolerance of inflation), as the most likely scenario, and definitely see no signs of a liquidity squeeze – neither in this chart, nor in the Treasuries.

Copper declining to verify its breakout of the bullish flag, that's another point for the economic recovery to me.

Commodities ($CRB) are still moderately rising, not questioning the recovery. It's one thing that they're underperforming – that's fine, as the sector tends to shine the brightest in the latter stages of the economic cycle. A top here is very far off, and would come only after a top in stocks in my opinion.

The dollar is barely catching breath, and I don't see it travelling far north unless another black swan strikes. No sign of one on the immediate horizon, no flight to safety here.

Summing up, the S&P 500 keeps extending gains, and I see little signs that it would roll over today. That's actually an understatement as the tide lifting all boats hasn't left out stocks. The confidence in monetary and fiscal policy keeps the S&P 500 well bid, and driven primarily by technology. The markets aren't too concerned by smallcaps lagging behind and the on-off rotation into sectoral value plays. The bull goes on.