The Tide Is Turning in Stocks and Gold

Friday‘s session ended in a tie, but it‘s the bears who missed an opportunity to win. Markets however dialed back their doubting of the Fed, which has been apparent in the long-term Treasuries the most. One daily move doesn‘t make a trend change likely though, especially since the Mar pace of TLT decline is on par with Feb‘s and higher than in Jan. While Treasuries paused in early Mar, they‘re now once again as extended vs. their 50-day moving average as before.

And that poses a challenge for interest rate sensitive stocks and to some degree also for tech -  while I expect value to continue to lead over growth, technology would recover some of the lost ground on rates stabilization. And it‘s true that the $UST10Y move has been a very sharp one, more than tripling from the Aug 2020 lows.

Inflation expectations are rising, and so is inflation – PPI under the hood thus far only. Financial assets are rising, perfectly reflected in (this month consolidating) commodity prices. Cost-driven inflation is in our immediate future, not one joined at the hip with job market pressures – that‘s waiting for 2022-3. The story of coming weeks and months is the stimulus avalanche hitting while the Fed still merrily ignores the bond market pressures.

And stocks are going to like that – with tech participating, or at least not standing too much in the way, S&P 500 is primed to go to new highs rather shortly. Given the leadership baton being firmly in the hands of value, smallcaps are likely to outperform the 500-strong index over the coming weeks and months. The volatility index is confirming with its general downtrend, commodities, including oil, will be the 2021+ place to be in – just see how fast is Thursday‘s steep correction being reversed. I‘ll be covering black gold more often based on popular demand, so keep your questions and requests coming!

The precious metals upswing goes on, and landed the yellow metal comfortably above $1,740. Not too spectacular, but the miners are still painting a bullish picture. I view the increasing appeal of the yellow metal (alongside the bullish sentiment hitting both Wall and Main Street) as part of the inflation trades, as decoupling from rising yields which increased really fast.

As gold is arguably the first asset to move in advance of a key policy move, it might be sensing the Fed being forced (i.e. the markets betting against the Fed) to moderate its accomodative policy. Twist, taper – there are many ways short of raising the Fed funds rate that would help put pressure off the sliding long-dated Treasuries, not that these wouldn‘t be susceptible to move higher from oversold levels. And just like the yellow metal frontrunned the Fed before the repo crisis of autumn 2019, we might be seeing the same dynamic today as well.

For the cynical and clairvoyant ones, we might sit here in 3-6 months over my notes on "he decoupling that wasn‘t“ - all because rates might snap back from the current almost 1.8% on the 10-year bond.

(…) The greatest adjustment is arguably in the inflation projections – what and when is the Fed going to do before inflation raises its ugly head in earnest. There is still time, but the market is transitioning to a higher inflation environment already nonetheless.

In moments of uncertainty that hasn‘t yet turned into sell first, ask questions later, let‘s remember the big picture. Plenty of fiscal support is hitting the economy, the Fed is very accomodative, and all the modern monetary theory inspired actions risk overheating the economy later this year.

Rates are rising for the good reason of improving economy and its outlook, reflation (economic growth rising faster than inflation and inflation expectations) hasn‘t given way to all out inflation, and stocks with commodities remain in a secular bull market. We‘re in the decade of real assets outperforming paper ones, but that will become apparent only much later into the 2020s.

The largely undisturbed rise in commodities got checked yesterday just as stocks did, but the higher timeframe trends (technical and fundamental drivers) hadn‘t changed, which will be apparent once the dust settles. 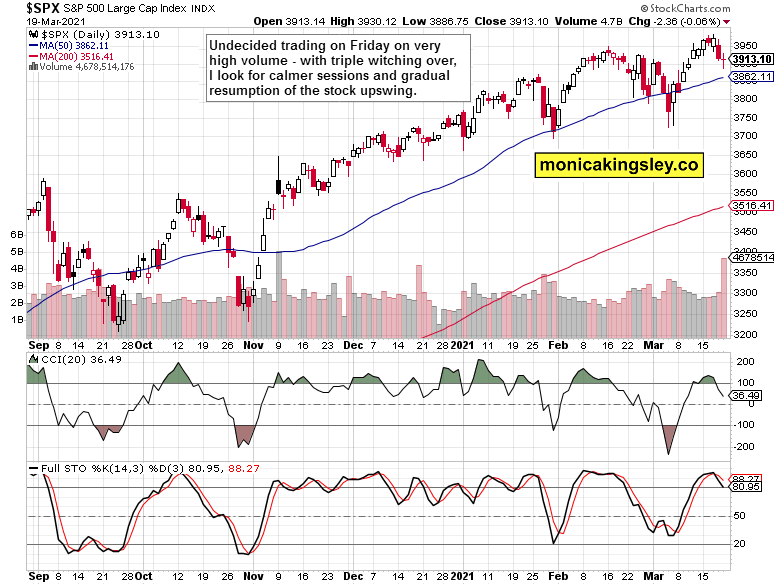 Friday‘s session on understandably high volume and with some intraday volatility, closed with prices little changed. While the daily indicators are weakening, I see that as a temporary move that would be followed by higher highs in the index. 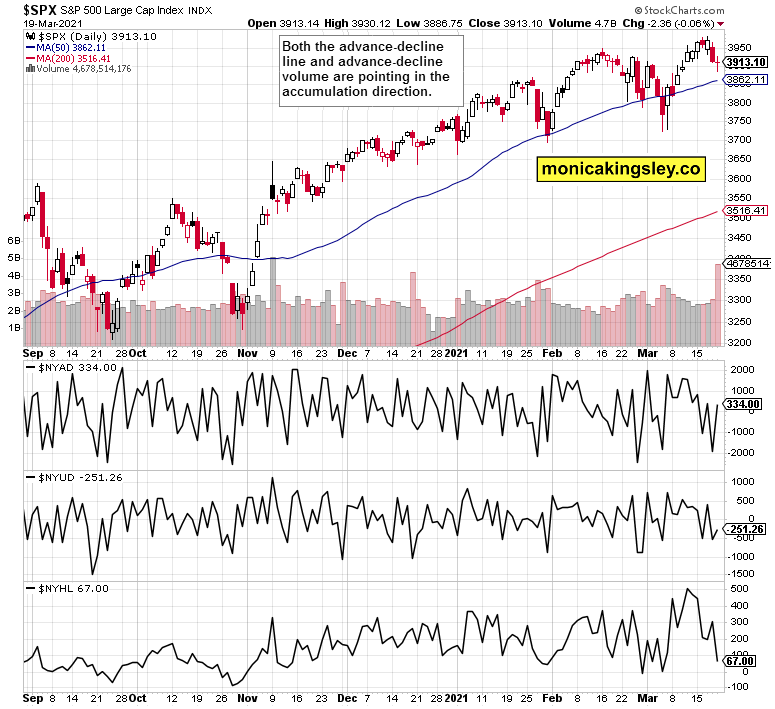 Market breadth indicators are largely constructive, attesting to the broad base of the current S&P 500 advance. Even on little changed days such as Friday, both the advance-decline line and advance-decline volume have risen. I wouldn‘t be concerned with the weak new highs new lows here much as the sectoral structure remains positive – both technology (XLK ETF) and value stocks (VTV ETF) have rejected further intraday declines. 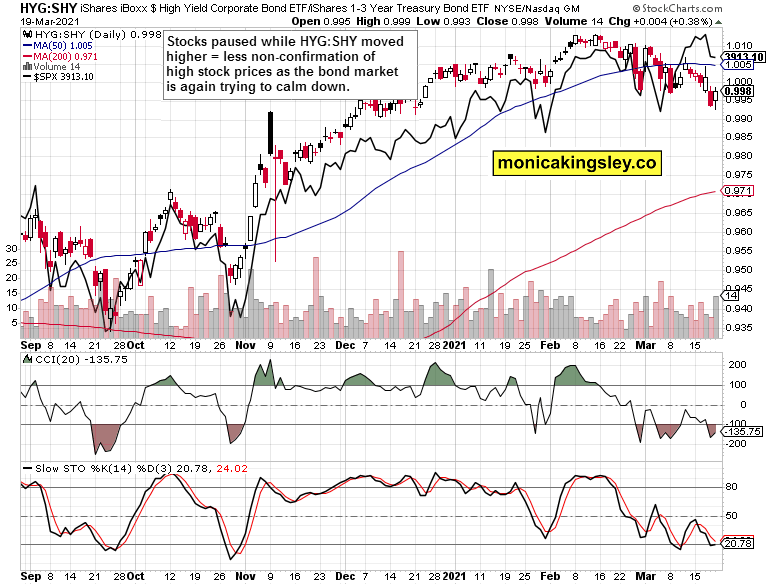 High yield corporate bonds have turned higher, and so did their ratio to short-dated Treasuries (HYG:SHY). This is a positive factor for further gains in stock prices.

The Russell 2000 (IWM ETF) isn‘t flashing any warning signs, and continues performing as robustly as the 500-strong index. Given the stage of the bull market we‘re at, smallcaps can be expected to start outperforming at some point in the future, just the same way their underperformance was over since early Nov. As regards emerging markets, their base building accompanied with Friday‘s upswing when faced with rising yields and solid dollar, is encouraging. 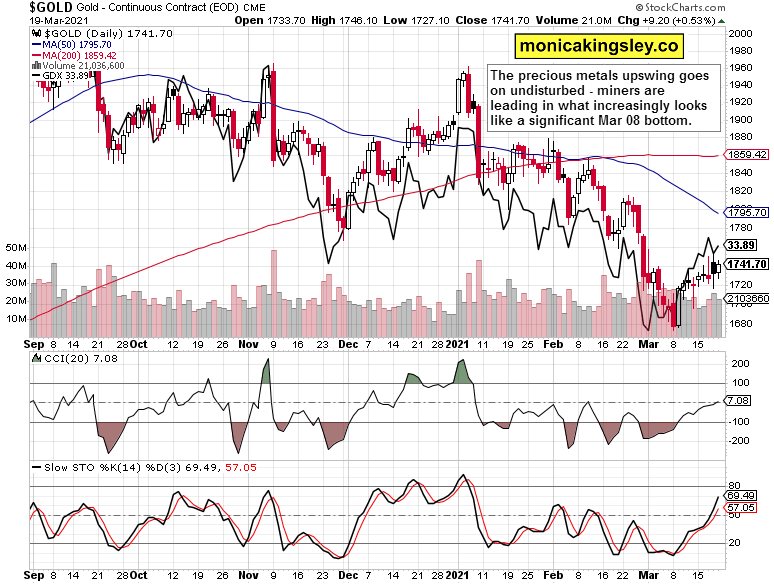 The gold upswing is progressing along, and the daily consolidation in the miners (GDX ETF) isn‘t an issue when compared to a stronger gold performance. Friday was also characterized by a bigger upswing in the junior miners (GDXJ ETF) than in the seniors (GDX ETF), which is positive. The overall impression is of GDX readying a breakout above late Jan and early Feb lows, which bodes well for the precious metals sector as such next – especially given that this decoupling is happening while nominal yields aren‘t truly retreating.

Both silver and platinum continue their base building while copper, the key ingredient within the copper to Treasury yields ratio, keeps bullishly consolidating. Silver miners aren‘t sending signals of underperformance, which means that the precious metals upswing dynamics remain still healthy on a closing basis. As regards premarket silver weakness, putting it into context with other markets is key – thus far, it‘s the odd weak one, so I am not jumping to conclusions yet.

S&P 500 trading was undecided on Friday, yet didn‘t bring any clues invalidating the bullish outlook. Volatility remains low, but the put/call ratio has risen, even without a corresponding downswing (or danger of seeing one). The Fed doubting induced pullback appears more than likely in its closing stages.

Gold had another resilient week, and the precious metals upswing examination bodes well for the move higher to still continue. Miners are leading, and the yellow metal keeps breaking the spell of higher Treasury yields, supported by copper not yielding ground either.