There Is Market Volatility Even on Bank Holidays

S&P 500 opening upswing gave way to more selling, but credit markets didn‘t lead to the downside on a daily basis. This tells me the plunge would likely be challenged shortly. As in facing a reversal attempt – it‘s that junk bonds for all the recent (and still to come) deterioration, will probably rebound a little next. Value already retraced part of Friday‘s decline – it‘s just tech that didn‘t yet react to the Treasuries reprieve. Good to have taken short profits off the table.

The table is set for S&P 500 to rise, and for bonds to rally somewhat. And that wouldn‘t be the result of war tensions lifting up Treasuries, gold and oil. Red hot inflation, decelerating growth and compressing yield curve are a challenging environment, and the odds of a 50bp Mar rate hike are overwhelming, but the Fed‘s balance sheet is still rising – now within spitting distance of $9T. Sure they will take on inflation, but I continue to think that by autumn they would be forced to reverse course, and start easing. Fresh stimulus after markets protest during 1H 2022? Would be helpful for the midterms…

The consumer isn‘t in a great shape as the confidence data reveal – and that‘s also reflected in the direction of discretionaries vs. staples. Inflation is pinching, and the pressure on the Fed to act, is on – its credibility is being challenged. Food inflation is high, and seeing food at home prices rising this much, is as surefire marker of coming recession as yield curve inversion is. And yield differentials are flattening around the world – quite a few central banks are more ahead in the tightening path than the Fed. Economy slowing down, stock market correction far from over (yes, in spite of the coming rebound, I‘m looking for lower lows still), and precious metals upleg underway – yes, underway, and especially our gold profits can keep rising – as I wrote on Friday:

(…) With gold at $1,900 again and silver approaching $24, copper‘s fate is also brightening – the miners‘ continued outperformance is a very good sign. With crude oil taking a breather, the inflationary pressures aren‘t at least increasing, but don‘t look for the Bullard or other statements to defeat inflation – I‘m standing by the 4-5% official rate CPI data for 2022 (discussed in yesterday‘s summary).

CPI might turn out even a full percentage point higher – depends upon the hedonics and substitution massaging. 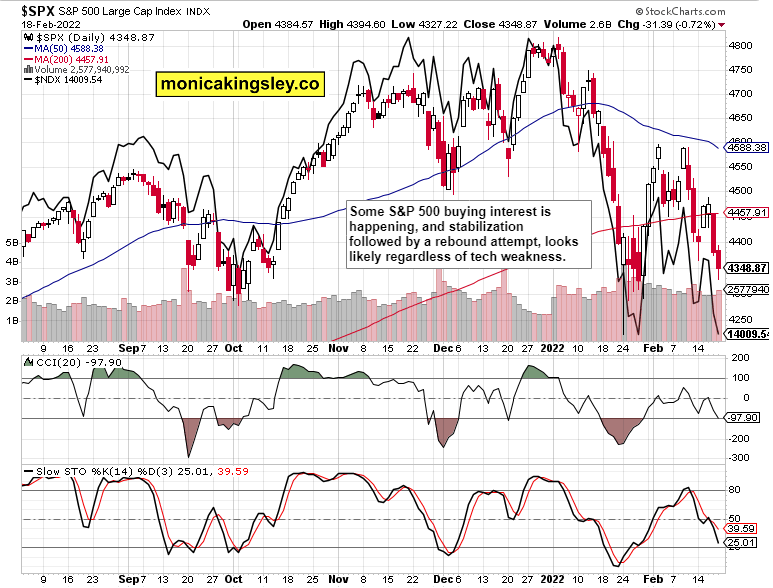 S&P 500 caught a little buying interest going into the long weekend – better days though look to be coming. Not a monstrous rally, but still an upswing.

HYG is indeed basing, and will help stocks move higher next. LQD and TLT are already rising, and there is still somewhat more to come. Bonds have simply deteriorated too fast in 2022, and need a breather.

Precious metals fireworks continue – we‘re getting started, and $1,920 is the next stop. Kiss of life from the bond market reprieve comes next, on top of all the other factors I‘ve talked about recently. 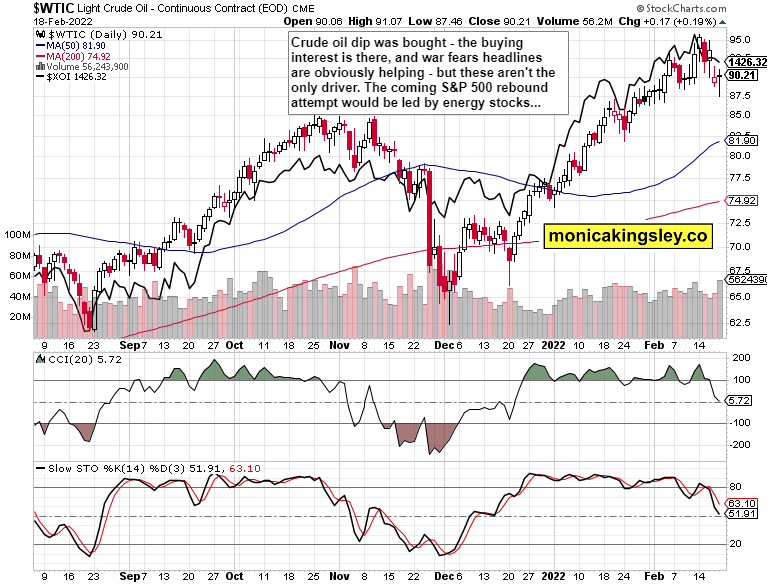 Crude oil is fairly well bid, but the war jitters are helping it out (as in staving off a bit deeper correction). As both oil and base metals are rising, inflation isn‘t likely to slow down (perhaps later in summer?) – black gold‘s uptrend isn‘t over really. 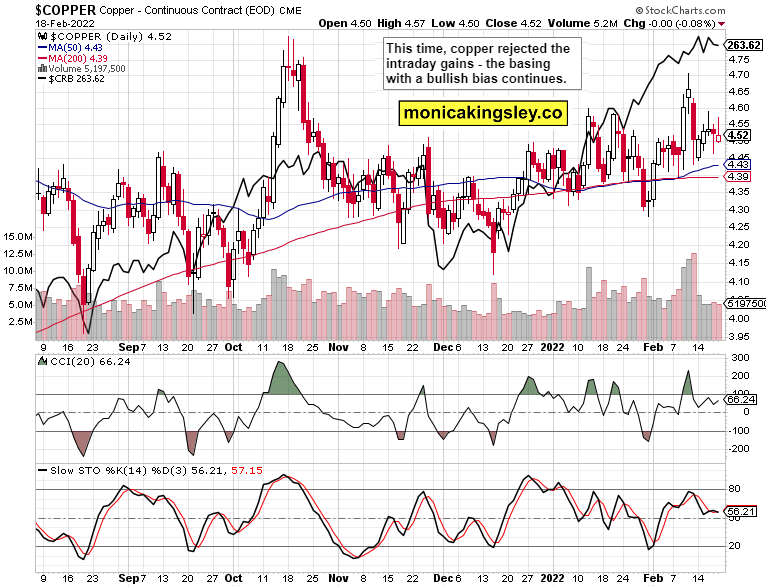 Copper keeps going sideways in a volatile fashion, and can be counted on to break higher – inflationary pressures aren‘t abating, and outweigh the slowing economy. 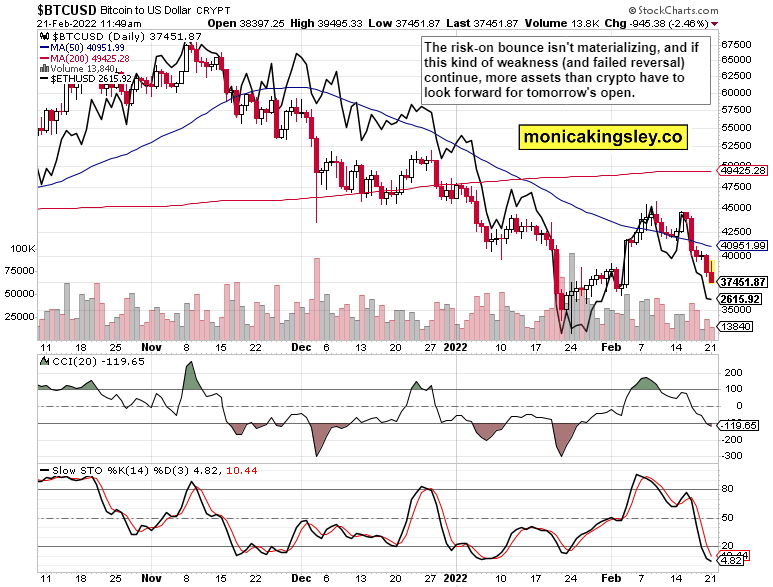 Cryptos did break down over the weekend, but the anticipated risk-on rebound fizzled out a bit too fast – as said on Friday, the bears have the upper hand now.

S&P 500 appears on the verge of trying to swing higher, and credit markets would be leading the charge as tech finally turns. Value had trouble declining some more on Friday already. Stock market upswing though wouldn‘t throw the precious metals bulls off balance – not too many weeks have passed since I was at the turn of the year predicting that gold (and silver with miners implied) would be the bullish surprise of 2022 – and for all the talk and preemtive tightening in the credit markets, we haven‘t yet seen the Fed move. Anyway, such a lag in moving the Fed funds rate higher, is normal these decades – we are a long way from the early 1980s when the delay between say 2-year Treasury and Fed funds rate move was some 2 months. Crude oil is likewise going to keep rising, and the same goes naturally for copper following in the footsteps.