The Three Biggest Risks for Investors

I've been a pilot for most of my adult life and I can tell you with some degree of certainty that situational awareness — or recognizing your positioning and the threats around you — is key not just to flying aircraft but almost anything that requires swift reaction times to rapidly changing data.

Even veteran pilots without sufficient instrument training can find themselves completely upside down within seconds when they have lost sight of visual inputs like the horizon or ground.

After eight months of one of the most turbulent periods in my 25-year career, I can say most investors found their situational awareness challenged this year. In our business it means losing money. For others like law enforcement or those in the military, it can mean losing your life or those you are supposed to protect. All of us regardless of profession continually need to push the envelope on our skill sets.

For me, the dot-com era and the financial crisis were formative learning experiences, and now the Pandemic of 2020 is the third major testing ground. 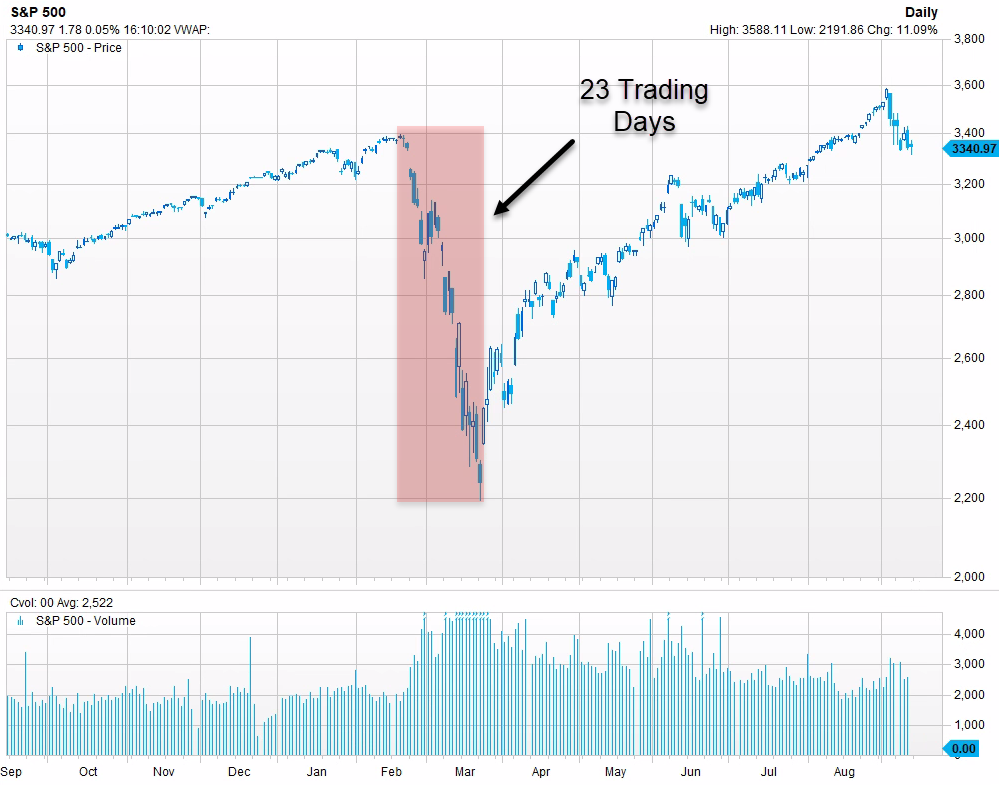 Just 23 trading days from the February 19th high to the March 23rd low. That's all it took for COVID-19 to wipe out trillions of dollars while at the same time destroying the livelihood of millions of Americans. The question is, why so fast? Even more surprising, how did we get back to all-time highs so quickly with millions still unemployed and many industries fighting for survival?

The first question is easy. FEAR spreads even faster than a virus and, like all panics, once the selling starts it usually doesn’t end until investors capitulate, willing to sell at almost any price. A complete shutdown of the U.S. economy felt like the world stopped spinning on its axis.

The only thing different this time was the time compression. Remember this wasn’t a bear market that unfolded over months. A fire broke out and once everyone could see the flames they headed for the exits.

It is the second question that is the toughest to answer. The elephant in the room was clearly the Federal Reserve. Yes, government stepped in with massive fiscal stimulus. The CARES act added $2.2 trillion including enhanced federal unemployment benefits, but it was the Federal Reserve taking the Fed Funds rate to Zero and adding another $3 trillion to an already bloated balance sheet that left professional and retail investors with no alternative for their capital. 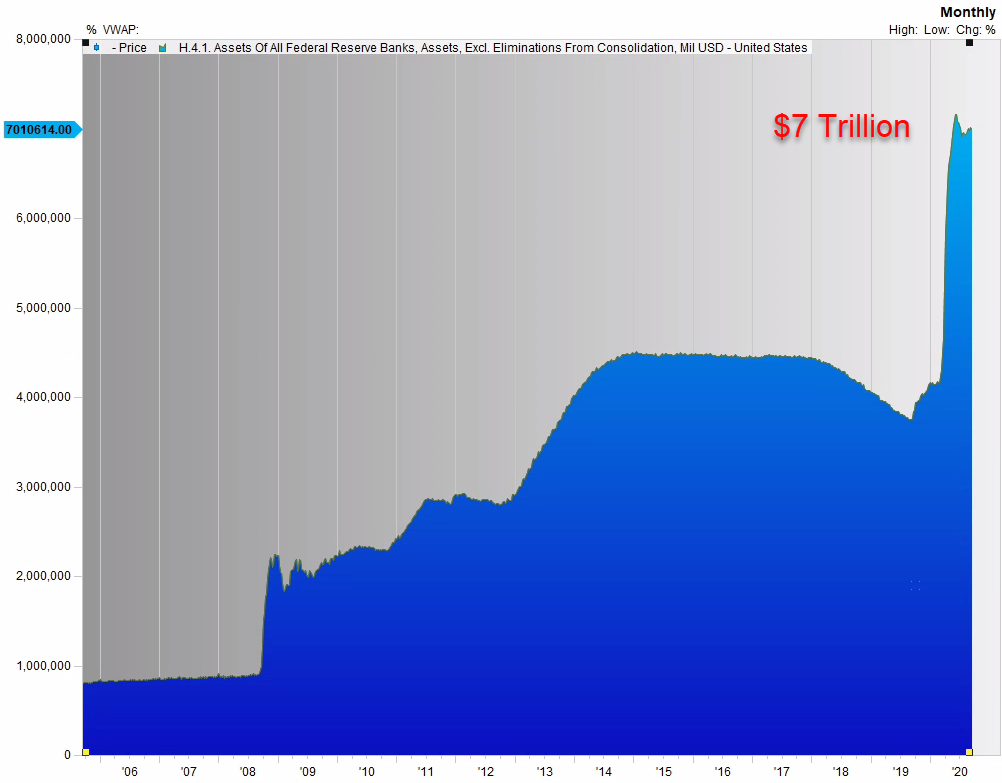 Investing in a 10-year treasury to earn a lousy 0.66% when the S&P pays you a dividend yield of 1.7% while you wait for earnings and cash flow to return hardly seems worth the risk difference. The Fed's revolutionary quantitative easing programs helped rescue the economy during the depths of the Financial Crisis and again during the Pandemic of 2020. The asset inflation born of artificially low rates and a balance sheet now $7 trillion, however, have been leading contributors to income or wealth inequality. If there is a bubble lurking, the bond market is my choice suspect. 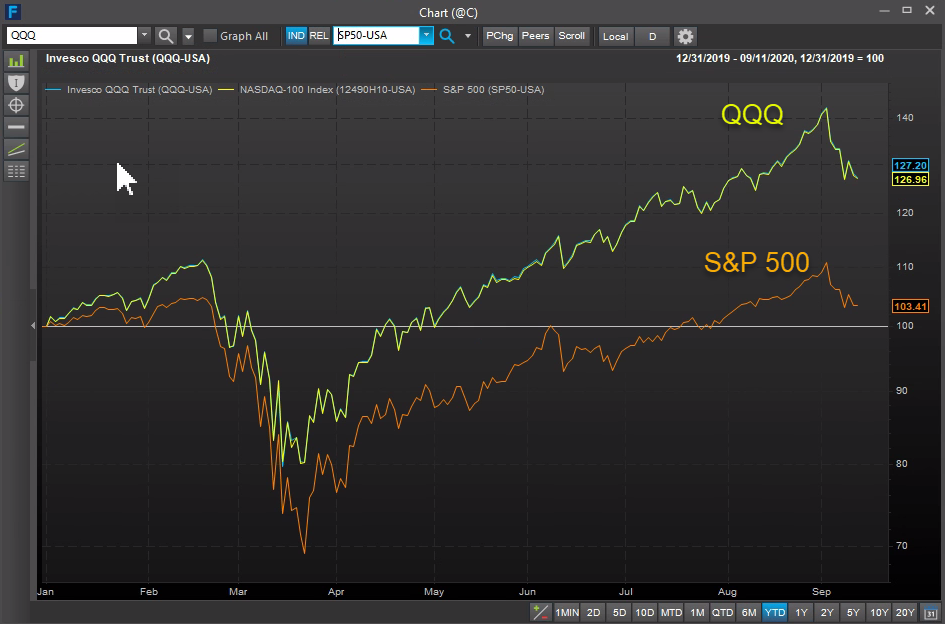 Within the stock market, it's fair to say investors have crowded into one side of the lifeboat, hiding in secular growth stocks, and, until recently, willing to pay almost any price. Goldman data puts the top five stocks by market cap — Facebook, Amazon, Apple, Microsoft and Alphabet — up a combined 42% this year, with the other 495 stocks in the S&P 500 down 3%.

There are always secular winners in any bull market, and this one is no different, but reversion to the mean is a powerful force. Some cloud companies within technology trade with 1000 PE ratios and at 40x sales. The Nasdaq 100 has outpaced the broad market by a staggering 24% year to date. Again, I repeat myself. I don't care if you're buying your goods from Amazon or Walmart. An industrial company has to manufacture them, a transport company must deliver them and, yes, a bank has to provide the financing.

No one can deny that technology is going to be the long-term leader in our information-based economy, but even technology companies need customers to buy their products and services. To expect these few growth industries to continue their ascent at the exclusion of all others echoes the "Nifty Fifty" one-decision stocks from the 1970s.

What's driving the recent shift from secular growth to value?

With earnings challenged for most companies outside of Silicon Valley, growth seemed like the only alternative. A possible trigger to the recent shift in sentiment forcing capital to reposition from tech to industrials and even financials is data suggesting a vaccine could be here by year's end. Another candidate is PMI (Purchasing Manager's Index) data improving and estimates for a range of companies outside of tech being revised higher.

Growth is the most expensive when there isn't any. As America goes back to work, growth is returning to essential businesses everywhere. In that mindset it is logical for investors to move down the valuation curve to other sectors and industries. I look outside my window here in Stamford, Connecticut, and see lots of construction. Eventually those Caterpillar bulldozers and cranes will have to be replaced. Cars are back on the road and will need parts. TSA data shows 3.36 million people took to the skies over the Labor Day weekend. That's up from 2.68 million during the July 4th holiday. Obviously, we have a long way to go, but the clear message is Americans are going back to work.

Will it be different when we reach the other side of the crisis? Of course, it will. The pandemic has accelerated trends already in place, likely pulling in forward demand. Close proximity businesses will have to find new ways to monetize, forced to operate at reduced capacity until there is a vaccine or cure. Airlines to theme parks to restaurants will have to come up with new ways to process and protect customers. Given American ingenuity and the ability to turn a crisis into an opportunity, my money is on the market economy coming up with the solution and not government.

3 Biggest Risks as we head into the 4th Quarter

Without question Number 1 with a bullet is the election but I'll leave that until last.

Shutdown - In the next 12 months one of two things is going to happen. Either a vaccine is going to cut the legs off this virus, or America will continue to re-open and find ways to live with it by practicing some of the basic guidelines laid out by the CDC. The third choice shouldn't be an option but is being considered by many. Even Neel Kashkari, Minneapolis Fed President, has called for a complete shutdown of six weeks for all but essential businesses. The carnage that would follow both in the economy and markets is obvious. The shutdown was never meant to wipe out the virus but to slow it down so it couldn’t overrun the health care system.

GDP Estimates in the out quarters not confirming 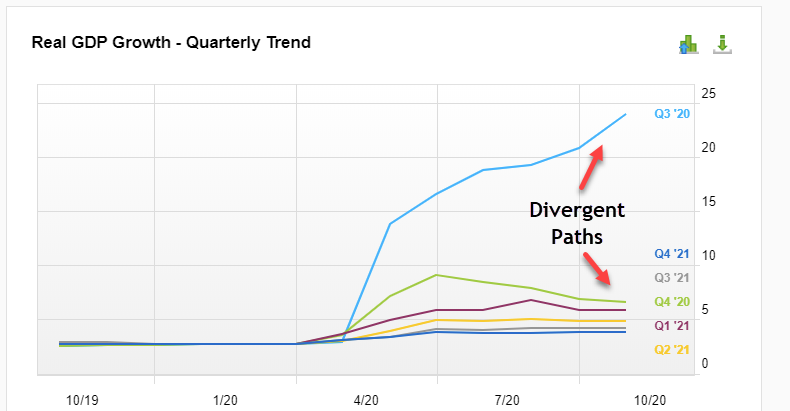 You can see in the real GDP quarterly estimate charts that Q3 is shaping up nicely. In fact, Goldman just put out a research piece suggesting estimates are too low and could come in as high as 30+%. Of course, that's on the heels of the worst quarter in modern history but I'll take it. My concern lies in Q4 and beyond. As you can see, initially Q4 estimates were rising along with Q3 but have now leveled off and have started to head in the wrong direction.

The Election - All of us come at this from our own political viewpoint. I think most agree, however, that this election will be the most divisive in a generation. The potential of a rollback of the corporate tax cut is certainly an earnings risk, especially if Democrats take both the White House and the Senate. However, the real risk for investors isn't financial or for that matter even political. Given the wave of mail-in voting, it is unlikely we will know who the winner is on election night. Some experts believe it could be days — perhaps, even weeks — before we can say with certainty who will be living at 1600 Pennsylvania Avenue for the next four years.

If that scenario plays out, expect lawyers with parachutes from both sides to descend on cities and local communities, anywhere there is a potential signature challenge, lost ballot, missed deadline, etc.

Markets hate uncertainty, and I can't imagine anything more uncertain than a dragged-out election count and the chaos that follows.

*At the time of this article some funds managed by David Nelson were long Facebook, Amazon, Apple, Microsoft and Alphabet.

Related: Are We Seeing a Dot-Com Redux?