The Sequencing of Peak, Pause, Pivot and Patience

While 2022 has been anything but unprecedented in so many ways, we believe some of the patterns that existed will soon see changes. It can be seen as akin to the breaking apart of Pangea, the earth’s land mass that eventually broke apart to form the continents that we see today. The breakup of this super continent can be seen as a potential divergence in policies from central banks across the world, various stages of slowdowns and recessions, the struggles with interdependence on global suppliers across many base goods and increasing tensions in political stability on an internal and external basis.

We have moved from a period in which the questions once asked were directed at what will perform best and why this would be the case. With the state of the markets over the last 30 years, we have seen some cyclical changes in leaders and laggards, however, mostly a buy and hold in debt and very particular growth components of equities paid off. All the corrections and bear markets were bought opportunities so long as you predominantly maintained the status quo. However, when times change and base economic principles revert to a period long forgotten, the questioning of these changes that are showing new regimes, one begins to question the viability of past and current strategies.

For those holding on to recent investment rationales, the question becomes “when?” In fact, while playing mere lip service to some of these changing tides in base economic and market front, it becomes a version of sunk cost and an advanced case of cognitive dissonance. As we have wrote in the past, the markets must go through the five stages of grief with each phase needing to be fully experienced before moving on. At times, the last year brought us all phases at the same time, though only superficially so.

So, while we have seen a near unified front of global central banks battling the specter of inflation by increasing interest rates at a pace not seen by investors recently, we are beginning to see the talks of moving the goal posts in the form of inflation benchmarks and balancing the precarious economic balance of consumers and corporations. We have only just recently seen the tempering of expectations moving forward in the UK and Europe as far as future rates relative to the U.S. The Federal Reserve continues to reiterate that rates will stay higher for longer. 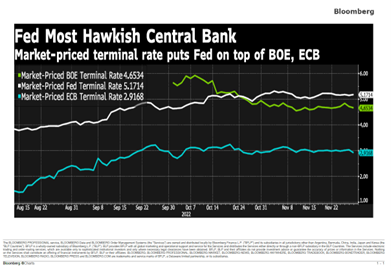 The terminal rate has dropped from 6% for the Bank of England to currently 4.63%, while the European Central Bank’s terminal rate has stayed constant at 2.92%. Both are below the current terminal rate pricing in the United States at 5.17%. Recall that at the beginning of the year the futures were pricing in a Fed Funds Rate at the end of 2022 of a mere 0.82%. With one meeting left in 2022, the probability is that the target rate will now be 4.50%, or almost 375 basis points higher. It’s akin to sitting at the tee box of a miniature golf course on January 1 and now the golf hole is a long par five.

As such, the questions that arise now have a sequential component with Peak, Pause, Pivot and Patience. One could argue these four P’s can have a different sequence and would receive no argument from us. The peak pertains to inflation and needs to see a subsequent declines in monthly measures. Since this is stickier than the Federal Reserve had ever thought it would be (hence their sticking to views of “transitory” inflation for far too long), the markets overreact to any subtle sign that we could be there. Ultimately, the story of inflation is multifaceted and there is not a single metric that is showing a slowdown anytime soon.

When this happens, there will be a pause in further rate hikes; however, this coincides with a demand destruction that will be evident as a recession.

It nearly always does and the severity of rates rising in accordance with inflation only makes this more so. It is also evident in every metric of the yield curve, earnings downward revisions, consumer sentiment and increased debt usage by the most important component of the economy — the consumer. Perhaps the only measure not pointing to a recession is the labor market. The problem with this argument is that the labor market is a lagging indicator and the announcements of job cuts from so many companies coupled with top line revenue estimates getting squeezed, this is not as strong as one might think.

The pivot is what so many investors are believing to be the “Holy Grail” of an all-in on risk assets, but history does not bear this out. Strategas did a study from the first initial cut in interest rates and how long it took for the S&P 500 to find a bottom. Their conclusion is that the equity market bottomed an average of 195 days after the first cut and bottomed at a -23.5% after the first rate cut. While these are negative to be sure, if we balance the immense amount of liquidity in investors portfolio, the huge amounts of Treasuries purchased as a cash proxy, the dollar’s massive increase in the first nine months of the year only to drop 12% from its highs, we can begin to have a more nuanced perspective. Perhaps the decline will be more muted since we are already 17% down for the year and large pools of cash may support the markets from a more devastating decline.

Ultimately, patience likely will be rewarded for those who tactically allocate over a period from current levels. Eventually, we think this will be seen as a great long-term opportunity, however, there is nothing on the horizon that says more economic risk and a proliferation in negative headlines will not present lower levels. Whether credit or equity, we see two characteristics of the better places to be — quality and quality.

Related: We’re Not at the Start of a New Bull Market