S&P 500 reached new highs powered by technology, even as value or Russell 2000 took a daily breather. With VIX going nowhere, and the put/call ratio turning complacent, the path of least resistance remains higher, and not even emerging markets are derailed by the strong dollar. While yesterday‘s stock market upswing was a defensive one as the credit markets and tech internals reveal, there is little to upset the cart – Thursday‘s ISM manufacturing will probably show solid expansion, and it would be only Friday‘s non-farm payrolls (better said what effect these could have on the Fed‘s labor market rationale for keeping the punch bowl available) to bring about volatile trading.

With the Fed support intact and fiscal one not retreating either, with inflation expectations not spiking, the current data are disregarded to a degree. Incorrectly in my view as Friday‘s:

(…) PCE deflator ... figure aligned with the inflation camp much better, yet the marketplace arguably expects better inflation data ahead - the transitory inflation thesis is the mainstream one, but I‘m still of the opinion that inflation wouldn‘t decline as meaningfully, especially when measured through CPI, PPI, and import-export prices, proving more persistent than generally appreciated.

The Fed is behind the curve in taking on inflation even according to El-Erian, and its monetary actions support both the Treasury markets and the red hot real estate. The lull in Treasuries is likely to last into the autumn, and the ensuing yields increase would reflect both the economic recovery and newfound appreciation of inflation. I maintain we‘re still in a reflation – a period of economic growth stronger than inflation – in a multi-year economic expansion, and also that inflation will surprise those considering it transitory (as if this word had any meaning still attached, after all the time length redefinitions). As a side note, if only consumer price inflation was measured without substitution, hedonistic adjustments, and owner‘s equivalent rent. In this environment, tech is unlikely to be derailed, and value will play catch up.

Precious metals are feeling the heat of inflation not being taken seriously, and miners are leading to the downside – not a bullish short-term perspective. Silver is inspired by copper‘s short-term woes more than by the CRB resilience. Coupled with the dollar keeping high ground, both metals are facing stiff headwinds.

Crude oil is likely to shake off the production quota increase uncertainty looming over the coming OPEC meeting – the correction has been thus far muted, with oil stocks bearing the brunt of the selling pressure. But that‘s nothing that couldn‘t be repaired over the nearest weeks – XLE would contribute to stock market gains, and black gold would remain way more resilient than oil stocks.

Cryptos are scoring gains as the base building hypothesis grows in strength, and the bulls have the initiative. 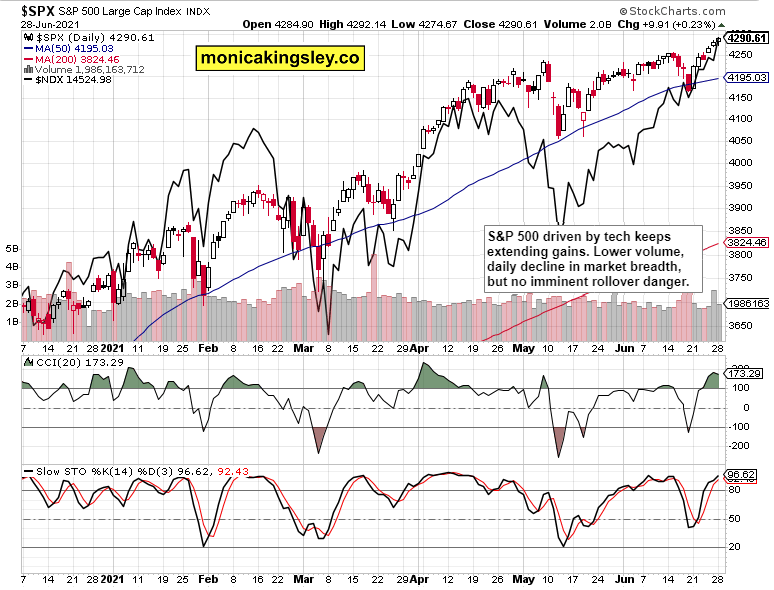 S&P 500 is going higher, with tech stocks once again in the driver‘s seat.

The risk-off turn in the credit markets wasn‘t overly strong.

Tech was primarily driven by $NYFANG as other sectors either held ground, or modestly declined.

Gold and miners still keep going nowhere, and the yesterday mentioned creeping deterioration is increasing the danger of a broader short-term decline. 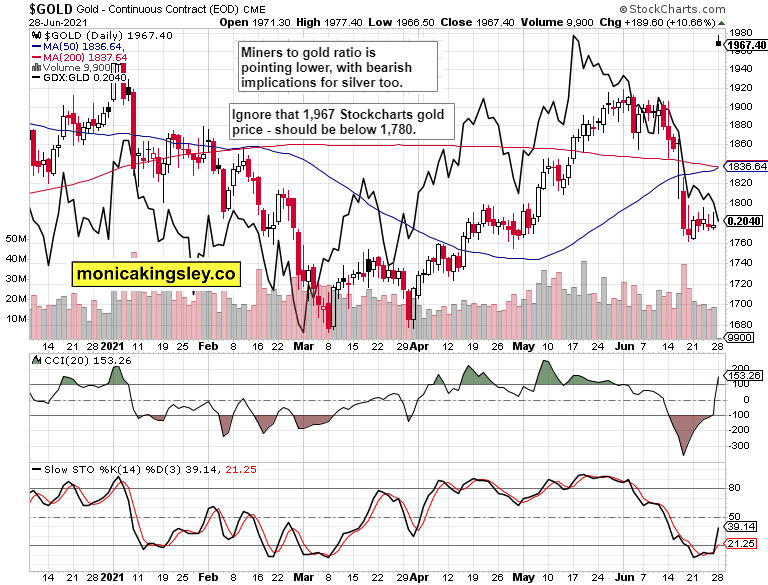 Also the GDX:GLD ratio ($HUI:$GOLD isn‘t properly calculated today unfortunately) reflects the momentary straits in the precious metals market. Silver remains under pressure as much as copper does. 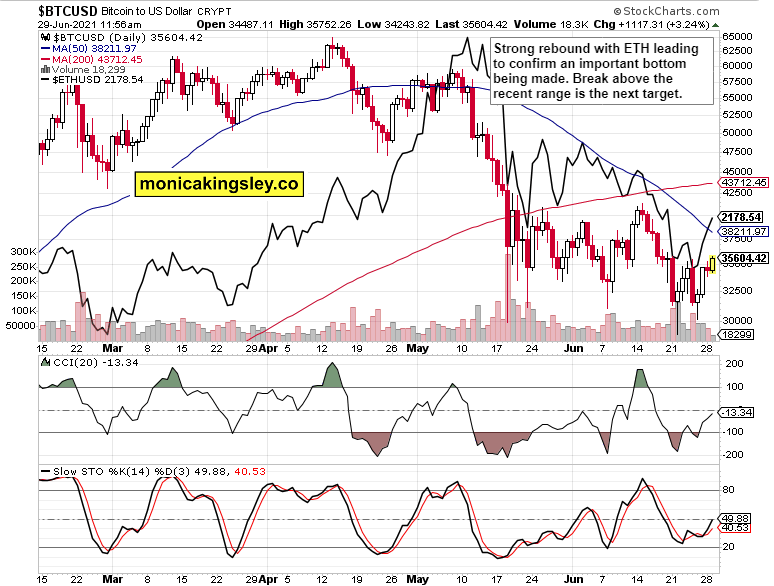 Quite a few good days in a row in the crypto space – the bulls are on the move.

Gold and silver are on the defensive in the short-term, and miners aren‘t pointing in the bullish direction at the moment – precious metals keep ignoring real rates and inflation.

Bitcoin and Ethereum are scoring gains as the base building hypothesis grows in strength, and overcoming the recent corrective highs followed by the 200-day moving averages, are the next medium-term objectives.