The Quick Souring of the S&P 500 Mood

We got that extension of Friday's rally on Monday, as I called for. Vaccine hype news. Good for bulls with tight exit orders – I managed to take a 55-points profit off the table. But big tech (think Microsoft, Amazon) suffered with talk of its bubble rising, U.S. – China tensions increased, and California sweepingly rolled back its reopening.

Spooky stuff for stocks, and they tanked. The brightening outlook I discussed after Friday's session, didn't last all that long. But is the selling over now, or we better brace for some more? 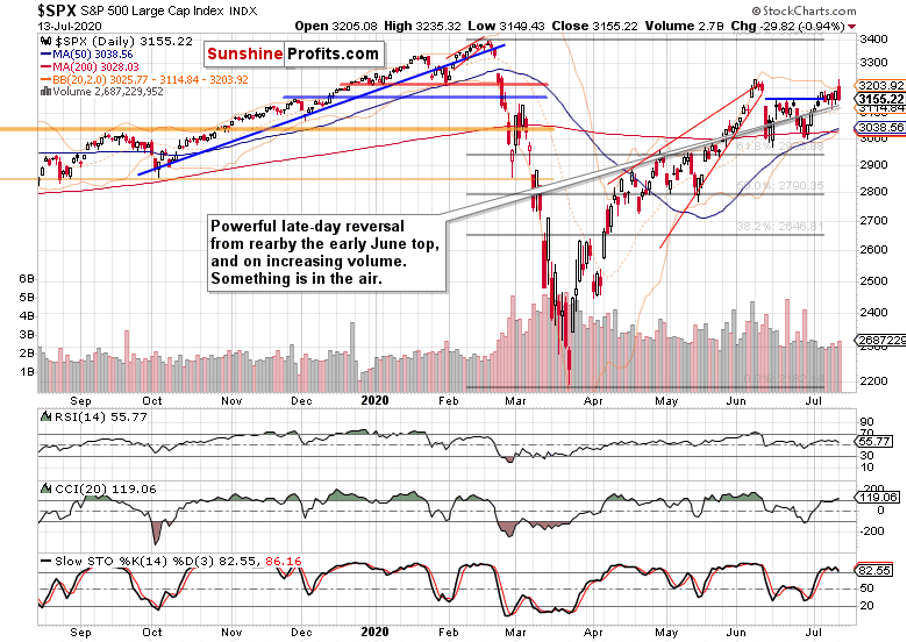 Stocks couldn't overcome their early June intraday highs just below 3230, and reversed lower on slightly increasing volume. Closing at the blue line connecting the mid-June tops, I see that the similarity to the S&P 500 taking on the late April and early May highs might be disappearning – unless the bulls pull out a rabbit out of their hats soon.

How likely is that? Vaccine news have lifted cyclicals – financials (XLF ETF) liked that. Then, Gov. Newsom rolled back California's reopening. Cold water that brought about a black daily candle in financials. It doesn't matter that they closed higher than they opened. It's the veracity of the reversal that should spook the bulls.

I would say that it's the fear of lockdowns and not surging corona cases per se, that it the culprit here. And it could make for a quick souring of market sentiment. Not that the bulls would be in a majority now, but there were some signs of greed creeping in already. Not excessive, but still.

Big banks are starting to report today, and the JP Morgan and Well Fargo Q2 results are in. Banks better have beefed up loan reserve provisions, because if California is a preview of things to come, and as reliable one as back in March when it was the first state to impose lockdowns… then things aren't going to look great for commercial real estate among many others.

How did yesterday's selloff reflect upon the credit markets? 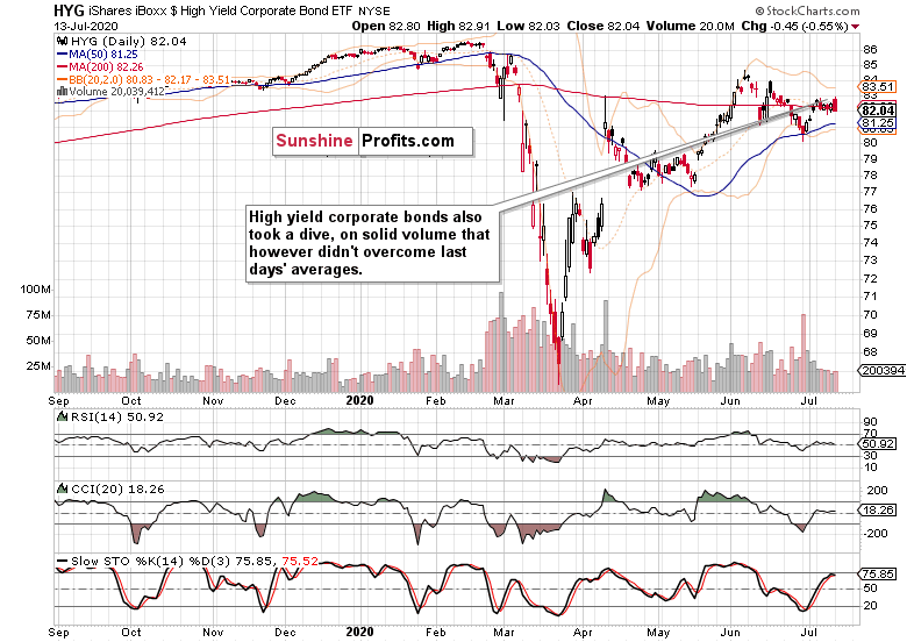 High yield corporate bonds (HYG ETF) also plunged, and ended in a similarly dicey position as the S&P 500. A ray of hope for stock bulls would be volume that didn't stand out. But in my opinion, it's premature to ascribe it a bullish interpretation, or to treat it as merely a consolidation just yet. 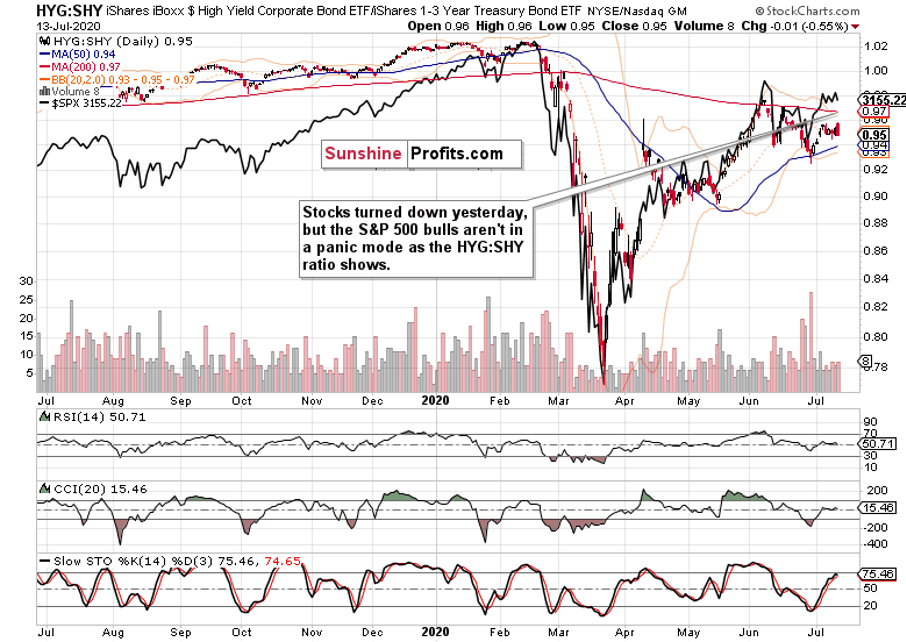 While that's a possible interpretation, I wouldn't rule out some knee-jerk moves in the short run. I think the potential for more selling is definitely there, and not only because of the fundamental dynamics I described a while ago. 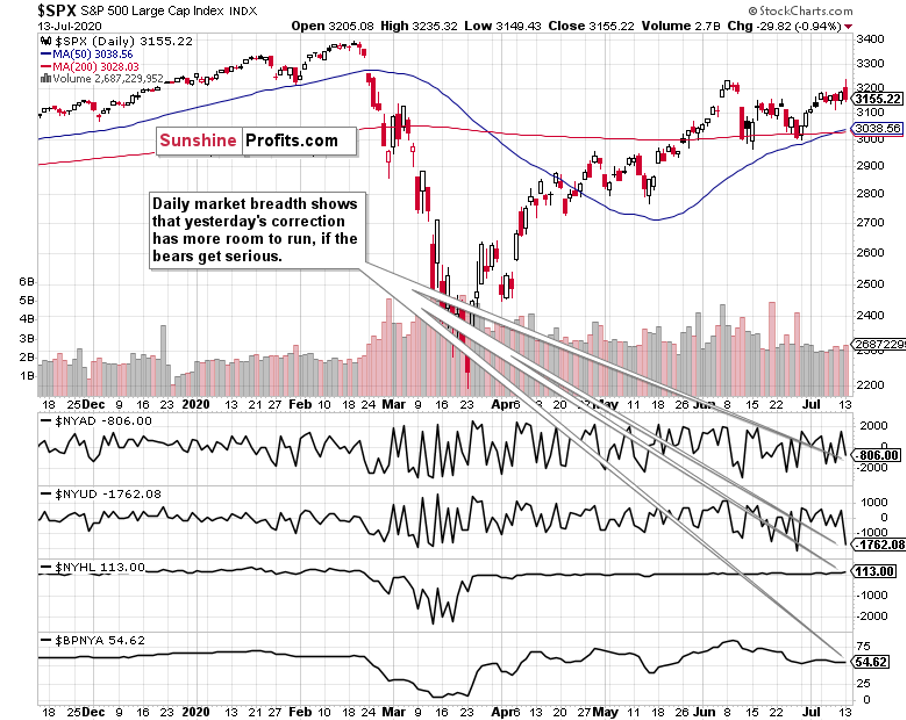 Arguably, the advance-decline line could go still lower before its rebound happens. The bears have probably set their sights to the 200-day moving average support that's around 3030. That would make for quite a turn in sentiment – but if you look at the daily S&P 500 chart, not that much would be happening purely technically speaking unless we break below the mentioned 200-day moving average, or the 61.8% Fibonacci retracement at around 2940.

Remember that only one bull market overcoming its 61.8% Fibonacci retracement eventually plunged below its starting point – the post WWII one. I don't think this bull run will suffer the same fate.

For now, caution is the best course of action as the very short-term outlook is rather unclear – yet with a distinctly bearish flavor.

Summing up, yesterday's late-day reversal has the potential to stick with us for longer due to the lockdown fear dynamics. Then, the tech ran into a brick wall yesterday. The Russell 2000 reversed on a strong volume, hinting at distribution. Credit markets show that panic hasn't yet set in for stock bulls, which is one of the reasons why this selling wave might very well not be over yet.