Sunday’s special Stock Trading Alert laid out the coronavirus crisis, response and consequences ahead in great detail and a 360-degrees view. Reading it will help you get the most out of today’s article as we will look at the internals and prospects of the stock market advance, and also introduce parallels relevant to today.

Let’s get right into yesterday’s price action in S&P 500 (charts courtesy of http://stockcharts.com). 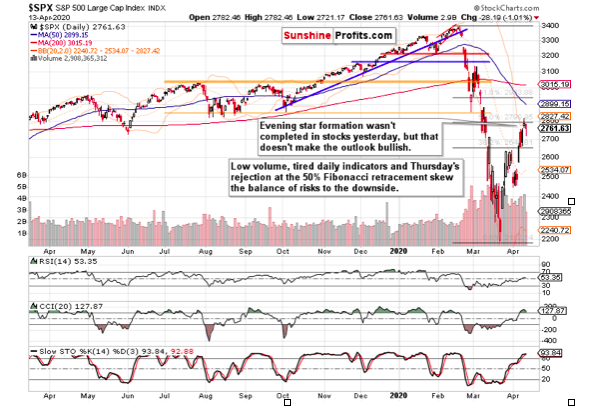 Despite the intraday downswing and bearish opening gap, stocks didn’t decline and bring the evening star formation into existence. But that doesn’t mean the bulls are out of the woods now. There are several cautionary signs such as decreasing volume, the tired look of the daily indicators, and inability to overcome the 50% retracement of the slide that took stocks from their all-time mid-Feb highs down to the mid-March panic lows. Additionally, several bearish gaps such as the one right above the 50% Fibonacci retracement or higher, stand unchallenged.

Let’s bring up the below chart with the relevant analysis from today’s Gold & Silver Trading Alert: 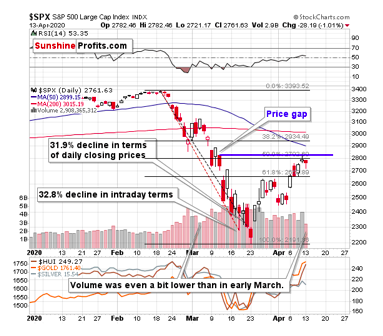 Stocks didn’t decline after opening with a price gap yesterday, which means that the “evening star” formation wasn’t completed. However, this doesn’t mean that the situation is now bullish. Conversely, what we see now resembles the previous biggest correction during this downswing – the one that we saw in early March. It started with a relatively low volume and during the daily downswing. That’s also what we saw yesterday.

Of course, the above is not the key detail factor behind the upcoming decline – fear in general and closing down a large part of the world for many weeks, along with broken supply chains, is the key detail. The above simply provides a timing indication.

It’s certainly true that quite a few tradable, sizable market moves start with a fake run in the opposite direction that ultimately burns itself out and reverses course. And this is what we’re likely witnessing these days in stocks as well.

A careful look reveals that stocks have been trading in a short-term rising wedge recently. Yesterday’s candle represents a test of the bulls’ resolve. While they may and likely will push higher again, it’s probable they’ll meet with increasing involvement of the bears. Regardless of the backing-and-filling that may come over the nearest days, another leg lower will come as surely as an increase in selling pressure.

Having said that, let’s examine two debt market charts – first, the newly supported HYG ETF, and then its ratio to short-dated Treasuries. 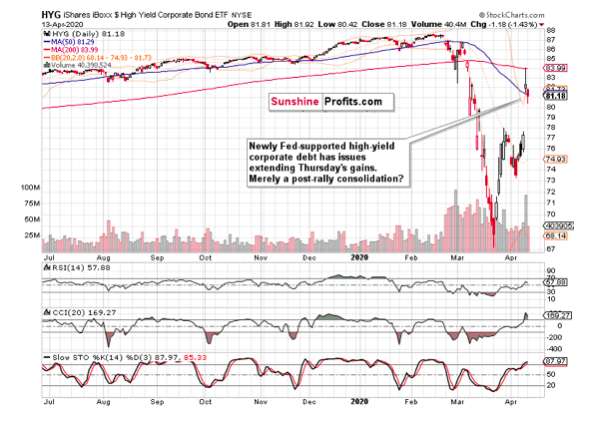 High-yield corporate debt couldn’t add to its Thursday’s gains yesterday. Whether or not it’s consolidating its meteoric gains, will help determine the fate of stocks’ short-term rally.

Should it be the case, then the ratio of these corporate junk bonds to the highest market cap short-term Treasuries ETF would be expected to rise as the bullish juices return to the stock market. We mean true bullish sentiment, not a reflexive rally originating in new money thrown at the issues that bring less bang for the buck than the previous stimulus did. 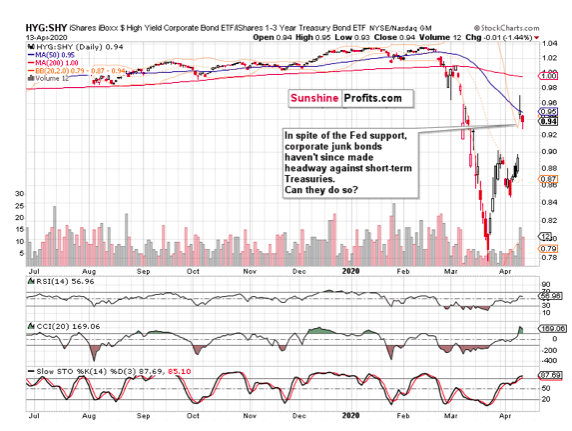 Yesterday, the ratio didn’t really shine all too brightly. That’s a leading indicator for stocks, which makes it understandable that the S&P 500 is lagging in the veracity of its $2.3T package rally.

There’s one more anecdotal evidence why something doesn’t feel right about the upswing. The below screenshot comes from Jim Cramer’s Mad Money show. 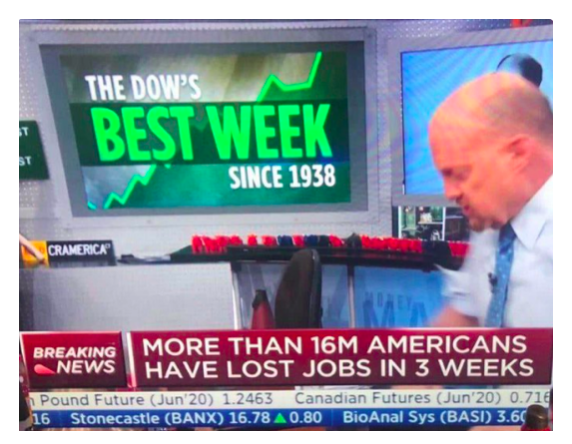 While markets are forward-looking, anticipating and discounting mechanisms, something stinks here. Can a true market recovery take hold when the real economy is going downhill this steeply? As we’ve discussed at length in our Sunday’s Stock Trading Alert, the case for a new leg lower and worsening coronavirus fallout, is strong. Stocks definitely appear to be getting ahead of themselves in anticipation of the V-shaped recovery, regardless of their underperformance of the debt markets.

Similarly sharp rallies have been what has punctured the way to the S&P 500 Great Depression lows. There have been quite a few false dawns since stocks succumbed to the big bear of late 1920s.

And even the on-screen number of 1938 brings up another historic parallel. One of the most memorable and also sizable stock drops came with the defeat of France in 1940. Facing Dunkerque, it became clear that prevailing over Nazi Germany wouldn’t be fast. Similar recognition will strike the markets in the coming days and weeks, as the economic costs of the coronavirus fallout both so far and still to come, become reflected in stock prices. The potential for policy missteps remains high, but the Fed has been doing a good job at limiting the financial system damage, and has actually instilled a degree of confidence.

While the Fed projects the power to stave off depression, they cannot buy us a true recovery. And that’s why we expect another leg lower in the coming days and weeks. Base-building is a process and while today’s bullish gap coupled with the sharp advance over 2800 shortly after today’s market open may appear encouraging, it works to lure the bulls into the market at a time when the risk-reward ratio isn’t really on their side.

Summing up, the bulls again seized the short-term momentum, and the credit markets appear to be giving them the benefit of the doubt. While the short-term bottom is in, the nearest key resistance (the 50% Fibonacci retracement) remains unbeaten. The risk-reward ratio isn’t on the bulls’ side as the market needs to somehow digest recent gains. In such an environment, sideways trading followed by renewed selling pressure taking on the March lows, is an optimistic scenario. The medium-term outlook remains bearish, and the short position justified as stocks won’t likely shrug off weak incoming April and May data on retail sales, consumer confidence, employment, manufacturing or the GDP.

We encourage you to sign up for our daily newsletter - it's free and if you don't like it, you can unsubscribe with just 2 clicks. If you sign up today, you'll also get 7 days of free access to our premium daily Stock Trading Alerts as well as our other Alerts. Sign up for the free newsletter today!