The Future of the Economic Recovery Will Be Decided by Another Lockdown – Is One Coming?

I believe that if fatalities stay in their declining trend, the likelihood of a second public lockdown stays low and the economy will continue its recovery.

The topic of COVID cases increasing has become a touchy one…and I think a lot of it has to do with media coverage, politics, the upcoming election and, a trust factor. It’s really becoming harder and harder to know what data is true or not and what sources are an actual authority.

There are so many angles to this that I want to focus in on the one thing that I think is important to what Monument does every day – provide straightforward opinion and unfiltered advice as it relates to financial planning and investment management. So, I decided to look at it from the perspective of “What does the data say about the PROBABILITY of the US economy going back down into a lockdown like we saw earlier this year?”

I understand there is a personal element to all of this – real people with friends and families are getting sick and even dying. I’m not dismissing that aspect of this epidemic, I’m just taking a look at a small sliver of this and offering an opinion.

It is undeniable, there is a surge in positive tests, but a common theme I keep hearing is that it’s only natural that the number of positive results will increase as the number of test increase. That’s not wrong, but to me, it’s more about the positive RATE. See below chart from TrendMacro 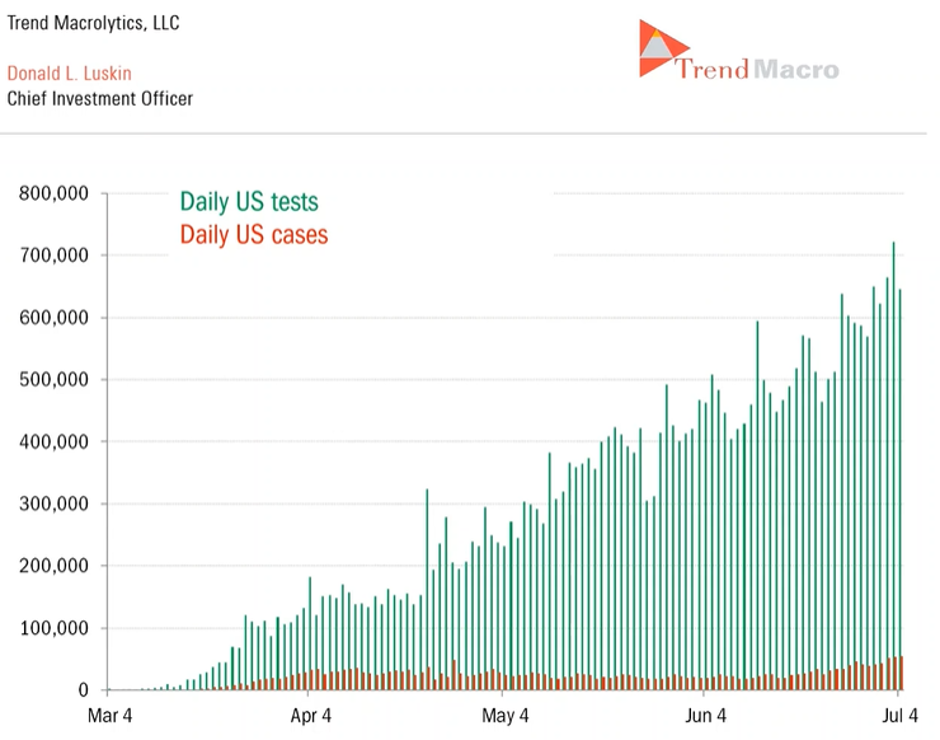 It makes COMPLETE SENSE that the orange line (cases) is trending up because the green line (tests) is going up. BUT, we need to consider the RATE…the number of positive cases divided by the number of tests. Again, see TrendMacro chart. 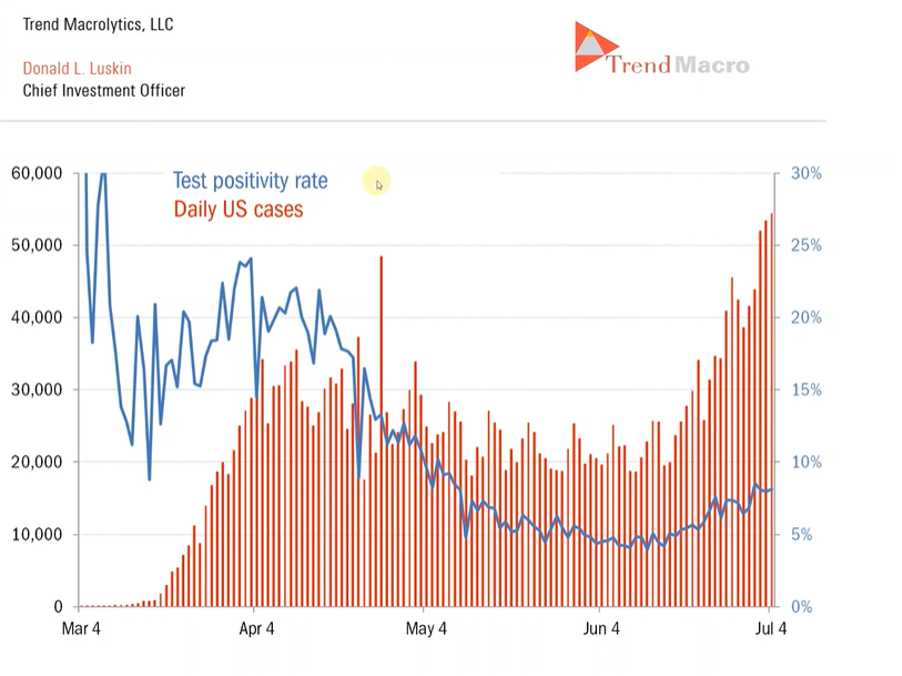 We are doing 650,000 tests a day (first chart), so we are definitely going to get more cases – nothing wrong or seemingly controversial about that statement or observation. Above, we see the blue line which shows the RATE…and that’s increasing too. It looks like it hit its low in June around 4% and now it’s doubled to about 8%.

So, we are doing WAY more testing and we are seeing a rise in the positive rate.

Not good – the disease is spreading and the test positivity rate has gone up.

But this is where people start debating…but forget all the back and forth bickering about sample bias, the double and triple counting of positive results (which is factually happening), the abundancy of tests available now vs March, and the likelihood asymptomatic people are now getting tested…I don’t think cases and positivity rates matter when it comes to the economy.

OK. So, what DOES matter to the economy?

Well, in the short-term (meaning between now and any vaccine) I think the economic outlook hinges on whether the population gets locked down again.

And any second locking down will most likely depend on fatalities increasing.

Again, I get it, from a societal perspective, it’s not good to see it spreading and increasing, but I’m focusing on what I think it means for the economy.

For that, see this chart- 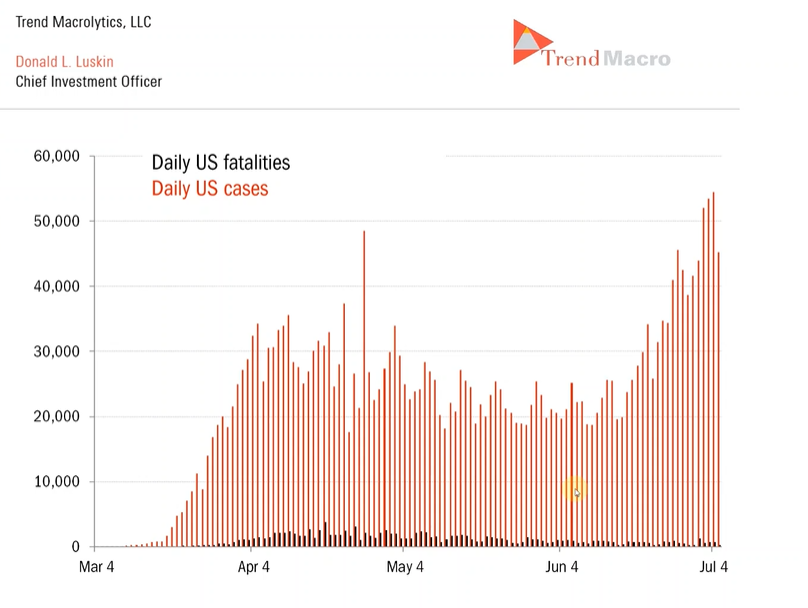 Fatalities (black bars above) look to have made their highs in April and thankfully have been on a generally steady decline. The good news is that for three months, even as positive cases and the positivity rate have risen over the last month, fatalities have not.

My opinion is that we will not see a lockdown as we had in March and April materialize unless that fatality rate starts to spike up.

That could begin to change and if it does, then the likelihood of public lockdowns remerging increases along with an increase in the fatality rate…and that will be bad for the economy.

As always, the best way to hedge against my opinion being wrong is to know your cash needs for the next 12-18 months. If you were kicking yourself for not raising cash (otherwise referred to, “I knew we were at a top, damn it, I should have sold”) in Feb, I think now is a great time to reassess that idea. 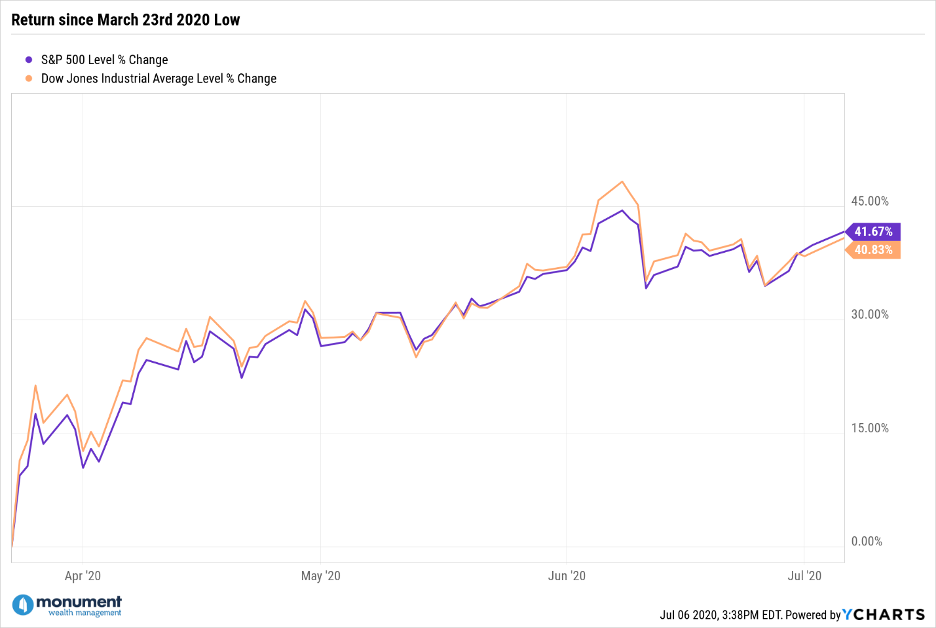 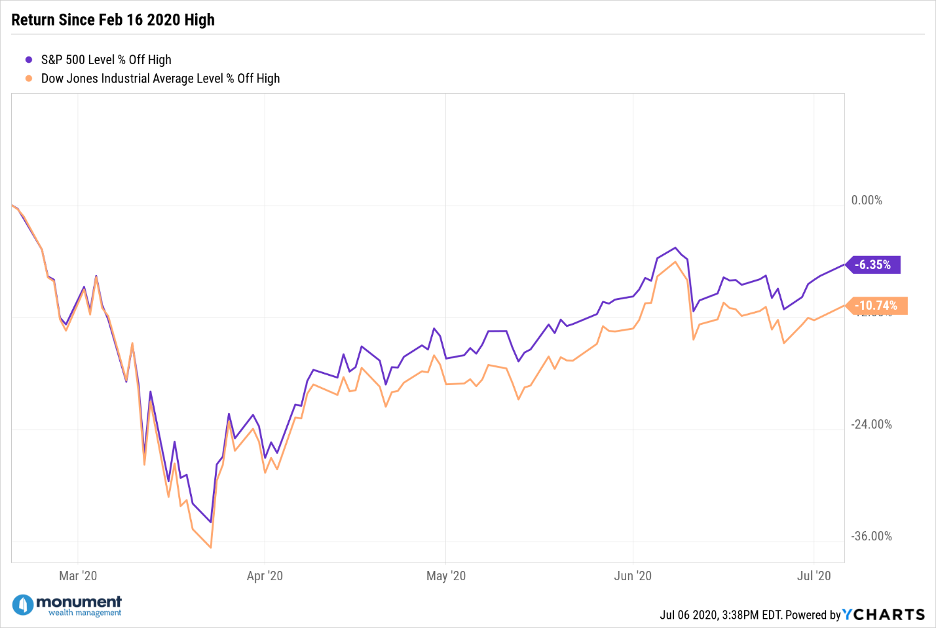 If you need cash, now is a great time to formulate a plan. That plan should include thinking about selling any securities trading at a loss from where you bought them…raise cash and get a tax break too.

Remember, when assessing whether or not now is the right time to convert equity exposure into cash, I think it’s more constructive to focus on the CURRENT OPPORTUNITY rather than nailing THE PERFECT TIME (which only materializes itself in hindsight).

Related: Find a Silver Lining With These 8 Wealth Planning Opportunities